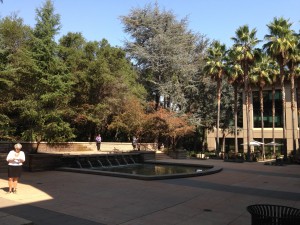 Patio behind the building we are meeting in at Stanford University

I’m attending a two-day course called Scaling for Social Impact, put on by the Nonprofit Management Institute of Stanford University. Scaling your ministry is all about getting a massive boost in results with the greatest leverage of your resources. That means you tap in to resources that are outside of your ministry, and that means that your ministry does not grow anywhere nearly as fast as your mission impact does.

Here’s what I learned on Day One.

Jeff Bradach of The Bridgespan Group gave us nine pathways to scaling up for impact.

Jeff reminded us of a few important strategies not to forget while scaling up:

Heather McLeod Grant of Open Impact said that the best nonprofits work outside of themselves, engaging business, government and other nonprofits with their cause. Here’s her definition of scaling:

Scaling is a leader building an organization that can build a network to grow a movement.

NFPs (Not For Profits) often stifle movements by saying “Here’s all that could go wrong.” If we don’t support movements of creativity, we will be sidelined as irrelevant organizations.

David Viotti, CEO of Smallify, talked about how to attack a really big goal. To smallify something is to get to the root cause of a challenge and then take quick action. It is to break something down to a small piece that can be worked on.

To smallify is to make small bets with relatively low risk and an affordable loss if it doesn’t work out. The attitude needs to be, “What can we do this Monday?” Do something, anything, NOW!!

Viotti taught us “the innovator’s bow.” Say “I am [name] and I have failed.” Then take a bow. Well done! You did something even if it didn’t work. That’s better than sitting around and doing nothing.

He also warned us that people who say, “Let me play the Devil’s advocate” are really saying, “Let me kill your idea!” Turn the “Yes but” answers to “Yes and”. Ask “So how can we do it?”

Bob Sutton of Stanford University said that when you have a pocket of excellence, the challenge is how to spread excellence from the few to the many without “screwing it up.”

Scaling isn’t just about the numbers, numerical growth and so forth. It really is about spreading a mindset – getting people to get on board with a new way of getting real world impact. Organizations that spread excellence have people who feel they own the organization, and the organization owns them. They share a mutual accountability for each person living up to the ideal and getting the job done well.

Scaling isn’t about getting more resources to do more. It’s about doing more with less. You start by cutting out all the ineffective things – those things you do only because everyone else does them.

Scaling is about getting others to help you accomplish your mission. That means that you will have to address the issue of whether you will enforce a cookie-cutter approach or allow for local variation on a theme. Allowing variation may encourage better employee engagement or it might lead to delusions of uniqueness. Some people want to change a program just so that they have exercised some control over it. Variation because of real variations in the local areas are quite okay, but don’t let people reinvent what doesn’t need to be reinvented.

How to spread excellence

I highly recommend Bob’s book:Scaling Up Excellence: Getting to More Without Settling For Less

That’s it for the first day.