Our multicultural, pluralistic society should be celebrated as evidence that people can live together peacefully, acknowledging their differences while getting along.

However, this irenic view of contemporary Canada is marred by a concerted campaign against religion by some that flies in the face of the espoused principles and values that a truly multicultural, pluralistic society holds.

The whole point [of pluralism] is to enable groups to “throw up a shield” against the pressure of consensus, and develop and promote alternatives that are rejected by the powerful, or by society as a whole…When people in liberal societies see themselves as out on the vanguard of history…they’re least likely to concede that they might, just might, be making a mistake, and most inclined to feel instead that the thing to do is shatter the shield wall around the remaining bastions of unenlightenment rather than permit them to persist. It’s when a consensus is at its most self-confident, in other words — and therefore most vulnerable to the errors of overconfidence — that the kind of pluralism that might serve as a corrective becomes hardest for that consensus’s exponents to accept.1

Many champions of tolerance have themselves become intolerant of views contrary to their own. They have fallen victim to the old axiom that power corrupts.

This is ironic because those who in the past were unjustly marginalized  should know best the injustice associated with oppression. Yet they have gained power and now themselves are the oppressors of another minority.

The clash of values that has polarized our society is (in my opinion) really a dispute about whether or not anything should be normative in our society. The goal of those with power or influence seems to be to eliminate anything normative for the sake of maximizing personal autonomy. Since all religions have group norms, religion is the focus of their attention.

So, in theory, pluralism offers peace and opportunity for all, while in the contemporary Canadian experience it also offers conflict and challenge to religious people. Christians need to respond to both the challenge and the opportunity.

There are two serious challenges Christians face: dilution and assimilation.

Many times I’ve been told by someone who is not a Christian that we are both climbing mountains, and when we get to the top we’ll discover we were climbing the same mountain, just different sides.

That sounds really warm and fuzzy, but it isn’t true. Christianity makes truth claims that are irreconcilable with any other religion, and I’m sure other religions would say the same about themselves. Christianity claims that Jesus Christ is the way to God. If I agreed there are other ways to God, then Christ is but one option among many, and I’ve diluted my faith. More than that, religions have incompatible treatments of sin and redemption that can’t be reconciled. Because Christianity is unique, being agreeable by smudging, ignoring, downplaying, or minimizing our differences only diminishes our faith.

The second challenge is to surrender to social pressure and give up our differences completely. If I were to just agree that Jesus was only a great teacher, or that the Bible is a cultural relic, then I could assimilate and be just like everyone else. Problem solved! But at the cost of the distinctiveness and power of my faith.

In Canada, the pressure to assimilate comes not from other religions. We seem to happily coexist even when each believes theirs is the correct religion. The only pressure comes from the secular elites who have it in for religion. 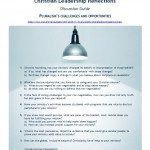 Response to the challenges

We must resist dilution and assimilation. We need to hold on to our differences if we are to have anything unique to offer the world. Miraslav Volf makes the point that:

Boundaries are absolutely necessary when defining authentic Christianity. Note that the boundary is around our beliefs, not our churches. I’ll address boundaries relating to people in another post.

Paul praised the Corinthians for putting boundaries around their faith3 and Jude told his audience that they had to contend for the faith against those trying to subvert it.4 The ancient creeds were also boundaries to protect the faith.

The best thing that pastors can do to protect against dilution and assimilation is to teach their congregations what we believe and to point out where we diverge from our culture or society.

Living in a culture that is foreign to us, we need to be wise about how much of it we participate in. Volf provides three options for Christians when assessing how much of the surrounding culture we can use:

We must be vigilant to be sure we do not compromise our faith. We can’t isolate ourselves from our society without losing the ability to be a witness, so we do need to participate in society, but do so without compromise.

Finally, since those with power and influence regularly resort to the law courts, legislation, and employers to coerce the behaviour and attitudes they want from others, Christians are becoming victims of oppression and even persecution. The response to this challenge has been covered in another post, Living in a Hostile Society.

There are several benefits to being just one of many in a pluralistic culture, and they provide the church with opportunities.

When Christians were the dominant group in society, there wasn’t a lot of motivation for individuals to engage in mission because it appeared the mission was largely accomplished. It’s interesting that the cure of souls, from which we get the word curate (a priest or pastor), can be traced to the fourth century when Christianity became Rome’s state religion. There was a shift then from mission aimed at outsiders towards taking care of parishioners’ souls. In modern times, missionary zeal was largely channeled toward other parts of the world, rather than to our own neighbourhoods.

But in fact, the Christian mission wasn’t nearly as fulfilled in Canada as we thought.

Pastors, remember that God gave you to the church to equip its members to do good works.5 It is your responsibility to see that every member of your flock is productively engaged in mission, remembering that the early church’s success was mostly due to the witness of individuals working on their own. People only have so much time available, so be sure that every volunteer hour you ask for within the church is essential to the church’s mission. Otherwise, keep your parishioners free to be Christ’s witnesses elsewhere.

Individually, we need to permeate society and be excellent in whatever God has given us: our work, our relationships, our community involvement, and so on. Every Christian should be the best thing that ever happened in whatever context they find themselves.

Corporately, we need the boldness, vision, and radical tolerance for risk that led John Wesley to :

What might the church do today that is just as creative, leading edge, and impactful?

We can use our voice

In a pluralist society, Christians are as much entitled as anyone else to contribute their ideas, which should be attractive based on their non-religious merits. The theological basis or religious motivation doesn’t matter to non-Christians. All that matters is that non-Christians can see the idea’s benefits. We can share good ideas for the environment, social justice, the economy, commerce, and so on.

Those who oppose religion are already trying to shut us down and keep us out of public debate. But history and research show that a minority can cause the majority to change its mind, although their strategy must be different from the majority’s.

We want to persuade people that for society to flourish there must be a concern for community welfare. We want people to support policies and behaviours that:

The church is the most multicultural society on the planet. It was an incredible experience for me when I worshipped in churches in Australia, Thailand, India, Kenya, Malawi, England, and Scotland while on my round the world sabbatical trip. I felt right at home in all of them! Whatever ethnic group I was with, I knew I shared a common faith with them. Whether I understood the language or not, the worship was meaningful and very moving. I know what it is like to be in a foreign country and find a welcoming place.

Being such a multicultural, global body as we are, and living in as cosmopolitan a country as we do, we have a special capability of welcoming immigrants to Canada. We should excel at helping newcomers acclimate to their new home. Non-ethnic churches should support ethnic churches as much as they can so that in turn they can welcome their own ethnicities to Canada.

We have to be very wise regarding the forces that oppose religious participation in society, but even with their opposition, there is much that the church can do to advance its mission. Stay tuned for more! This post concludes this series on Where is the church? The following series is What the church must address.

Key Point: We don’t need to be at the centre of society in order to be Christ’s witness for a better way of living.

Where is the Church?