Why we see things differently

“The aim of our integration of faith, work, and economics is not conservatism or liberalism. The aim is the glory of God and the flourishing of our communities.” Charlie Self1

This new series, What does the church need? will cover four action steps that the evangelical church needs to take in order to equip itself for better, more effective, participation in our contemporary Canadian culture.

This post covers the first step. We need to thoughtfully and prayerfully consider our positions on the social and political issues of our day. These issues, such as poverty, injustice, inequity, inequality, sexuality, community values, and so on, are complex. There are many ways of addressing these issues, most of which can be labelled as left/liberal or right/conservative, but the best, most viable and sustainable solutions are likely more nuanced than those black and white labels suggest.

Evangelicals range from fundamentalists2 on the conservative side to progressives on the liberal side.3 Most evangelicals are in the middle. This means Christians may have differing positions even when they are all within the evangelical camp. We need to understand why we’ve landed where we have, and be confident that our positions can be justified on the basis that they glorify the Triune God and support the creation mandate and the church’s mission.

So with that in mind, let’s do a quick review of where evangelicals are on the various spectrums and why they are where they are.

Canadian evangelicals have historically supported all the major political parties in the same proportion as the general population. We don’t vote in a bloc as they tend to do in the States. However, over the last twenty years, Canadian evangelical support for the Liberal party has declined relative to the rest of the population, with the former Liberal voters moving to the Conservatives, NDP, and Green parties due to a long pattern of anti-evangelical pronouncements from the Liberal party leadership.

In the last federal election, Canadian evangelicals did vote as a bloc for the Conservatives, but that was probably because the only other major party leader with a chance of forming a government, the NDP leader, said that evangelicals are unCanadian. It’s anybody’s guess whether this voting pattern will continue or whether evangelicals will revert to their previous patterns.

There is no single party that an evangelical can vote for in good conscience that the party will fully align with a Christian perspective. So we muddle along and vote according to whichever of many Christian considerations is most important to us.

However, with the various parties’ platforms more recently, this is no longer the case. It really leaves evangelicals in a quandary because every party has its significant downside. One option that most evangelicals do not support in a meaningful way is a Christian party. We have one in Canada, but it only got 15,000 votes in the 2015 election (down from 26,000 votes in the 2008 election).

Strategically, a Christian party is problematic because what’s good for the goose is good for the gander, and would we ever want to have a party representing another religion form the government? We certainly wouldn’t feel we were represented in such a government or that they had our interests at heart. Non-Christians would feel the same way about a Christian party winning an election. The better way is for evangelicals to take part in the existing political parties. It’s interesting to note that all three major political parties in Canada have evangelical MPs.

Richard Beck, in his book Unclean

, reports some research4 that explains the differences between social liberals and conservatives (whether religious or not) in terms of moral foundations, which I think could help us better understand each other and even our own positions. A moral foundation is the basis on which we decide whether something is right or wrong.

There are five moral foundations in this model:

Beck refers to Jesus’ conflict with the Pharisees in Matthew 9 and draws attention to Jesus’ quotation from Hosea 6:6, “I desire mercy, not sacrifice.” Beck aligns mercy (by studying Hosea and the Minor Prophets) with the first two moral foundations and sacrifice with the 5th foundation – Purity/Sanctity. While he states, “Let me be clear that I’m not co-opting or identifying Jesus with liberal positions in the contemporary culture wars”, he does identify Jesus as a liberal in the context of the issues of his day.

The main conflict between liberals and conservatives is the priority, if any, given to the purity/sanctity moral foundation. Liberals are not nearly as concerned about this foundation as the conservatives are.

I find it very significant that the purity/sanctity foundation is not just divine in nature, but includes human dignity as well. You don’t have to be religious to use this as a moral foundation, you just need to be concerned about people being debased or demeaned.

But in addition to the human dimension, all evangelicals have a high view of humanity because of our faith, and have difficulty with anything that demeans human dignity and treats a person as anything less than God’s design and intent for the human person. The difference between morally liberal and conservative evangelicals is the relative priority given to this dimension. 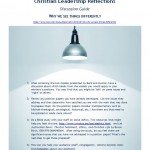 James Davison Hunter, in his book To Change the World

, sees three main branches of political, social, and theological thought in the evangelical branch of Christianity, and names them as Conservative, Progressive, and Neo-Anabaptist. I’m focusing on the conservative and progressive (liberal) wings in this post.

Hunter says that evangelical conservatives believe the main challenge in the world today is secularity, and that the solution is to ‘resacralize” our society (akin to Beck’s Purity/Sanctity moral foundation). This means bringing God back into all parts of our social activity.

Hunter says that both conservatives and liberals have identified important parts of the problems we face and their solutions are, in part, correct. His conclusion, though, is that both parties are mistaken in thinking that what they perceive as the main challenge is the defining one that trumps all others.

Socially conservative Christians have high ideals for life and family. They see these two concepts as foundational to human flourishing. Their goal isn’t to force Christianity on anyone, but they do want a society that aligns with a high view of life and family.

Unfortunately, life and family are both under sustained attack. Life is being challenged at both ends – abortion and euthanasia. Family is being challenged in many ways through all the issues related to monogamy, sexuality, the state increasingly taking on the parents’ role through the school system, and so on.

The family is so highly valued because it is at the core of human society. It is the basic social unit that provides the healthiest environment for raising a new generation.

Socially progressive evangelicals place the highest emphasis on God’s justice, which means equity (fairness) defined in terms of the freedom of individuals and communities from poverty caused by domination and exploitation by the powerful and wealthy. I should note that evangelical social progressives are quite different from their secular counterparts, who are also interested in equity, but they define it in terms of individual autonomy and freedom to choose one’s own lifestyle.

Evangelical progressives are working hard to realize the justice, peace, fairness, and community of that is realized when God moves in and lives with humanity.

The goal is not to be liberal or conservative, left or right, but to be faithful representatives of Jesus Christ, and through our engagement with the world, to bring glory to the Father, Son, and Holy Spirit and help the church accomplish its mission, bringing God’s love to all humanity and bringing people into relationship with Jesus Christ.

I’m hoping this post will help people across the spectrum better understand why they hold their positions, but also see there is value in other perspectives. It would be great if a better understanding of all positions could lead to more complete, more robust positions on the issues of the day. Let’s apply the very best available research and biblical-theological reflection to develop a Christian position that defies categorization in conventional political or social labels. Let us be thoughtful, prayerful, and informed evangelicals.

What does the church need?