CCCC is pleased to announce that our V-P of Legal Affairs, Barry W. Bussey, has received the prestigious Queen Elizabeth II Diamond Jubilee Medal in recognition of his work to support religious liberty in Canada and abroad. 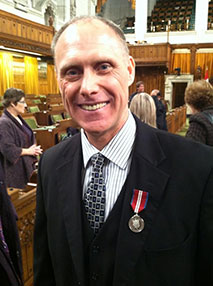 “I am humbled by this honour,” says Barry, “but I accept it because of the cause of religious freedom and the increased light and discussion that will come as a result of this award.”

Barry began his career as a pastor in a two-church district in Newfoundland. After completing his Bachelor of Laws degree at the University of Western Ontario, Barry practiced general law in St. John’s. He continued his studies, earning a Master of Arts Degree in Political Science from Memorial University of Newfoundland and a Master of Laws Degree from Osgoode Hall Law School in Toronto. Before working at CCCC, Barry spent two years serving as the Associate Director of the Public Affairs and Religious Liberty Department at the General Conference of Seventh-day Adventists, right outside of Washington D.C. He has also served as the editor of the International Religious Liberty Association’s journal, Fides et Libertas.

“This is a great honour for Barry and a tremendous affirmation of the work he does,” says John Pellowe, CEO of CCCC. “It also will certainly add additional credibility to his work on our behalf here at CCCC in providing thought leadership to the issue of religious charities as a valuable part of the Canadian charitable sector.”

Commemorating the 60th anniversary of Her Majesty’s accession to the Throne, the Diamond Jubilee award is granted to Canadian citizens who have made “a significant contribution to a particular province, territory, region or community within Canada, or an achievement abroad that brings credit to Canada.”1

The award ceremony was held today at the House of Commons, Parliament Hill, Ottawa.