Billy Graham: A Leader of Personal and Ministry Integrity

Billy Graham passed away on February 21, 2018 at 99, after a long life of service to God in evangelism. He spread the Gospel by television and radio networks, newspaper columns, feature films, and satellites.

Integrity at Every Step

In 2008, CCCC presented to Billy an award in appreciation of a lifetime of personal and ministry integrity.

At the ceremony, John Pellowe, CEO of CCCC, expressed appreciation for Billy’s “decades-long modeling of integrity.”

At the appreciation event, in presenting the award to Billy’s grandson Will Graham, John said, “We give glory to God for the strength He gave to Billy and still gives to each of us so that we can live lives of integrity.”

In response to the award of integrity, Billy wrote to the CCCC: “I am overwhelmed to be recognized and honored today by the CCCC. Without my longtime team of associates, my ministry would not have been possible.

“So I thank you on their behalf as well as for myself. I thank God for the varied ministries who are members of the CCCC, and praise Him for all that He is doing through each of you.”

Billy’s commitment to integrity grew out of his awareness that he is a representative of Jesus Christ, and that people would “evaluate the truth of the Gospel by what they see of our lives and our integrity.” 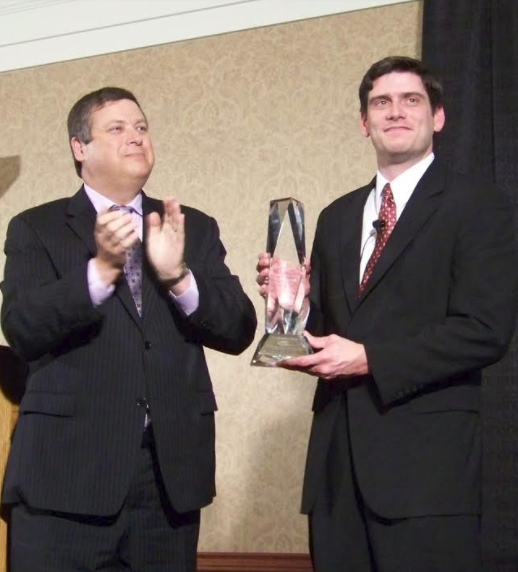 John Pellowe, CEO of CCCC, presenting the award to Billy’s grandson Will Graham, who accepted the award on his behalf.

But Billy said integrity was far more than a tool for evangelism. He said, “Even if others were not watching us and evaluating our ministries by what they see of our honesty and integrity, we still should be above reproach, because we are accountable to God.

“We need to lead the way be setting the highest of standards. With God’s help, you can be a man or a woman of integrity–in your family, in your business or ministry, in your recreation, in your relationships with other people.

“You can’t do it on your own. Some of you have tried and failed. But when you turn to Christ at the beginning of each day and commit that day to Him, He will help you and strengthen you. He will help you get your priorities right.”

“The Canadian Council of Christian Charities is uniquely positioned to raise awareness about integrity in ministry by giving or withholding the seal of accountability and holding members to the highest possible standards.”

Since 1988, the Billy Graham Evangelistic Association of Canada has met our Standards of Organizational Accountability and Integrity.

Billy and his team scrutinized every aspect of their ministry against their standard of integrity and made changes. He took a salary comparable to a senior minister in a large urban church, so no one could say he had a personal benefit from Crusade offerings. The ministry relied as much as possible on the money raised in advance by local Crusade committees.

After each Crusade, the audited financial statements were published in the local newspaper. There were no high pressure invitations at the Crusades and they relied on the police or stadium officials for attendance estimates, and then reduced them by 10% to be conservative.

They followed the New Testament model of travelling in teams. He never allowed a new ministry to be created out of his Crusades because he had promised the local pastors he would serve and strengthen their churches. The fruit of his Crusades was directed to those churches.

We thank God for Billy Graham, the lives changed through the Gospel message he preached, and his commitment to integrity.