On March 24 I, along with my colleague Derek Ross, represented Canadian Council of Christian at the Supreme Court of Canada hearing on the Loyola High School case in Ottawa.  Loyola High School is a Jesuit school located on the outskirts of Montreal that objects to the Quebec Government’s insistence that it not be “confessional” (or religious) when it teaches the province’s Ethics, Religion and Culture curriculum.  Below are the notes I made while listening to the arguments.  At the end of this post is a link that will take you to the video of the hearing itself. 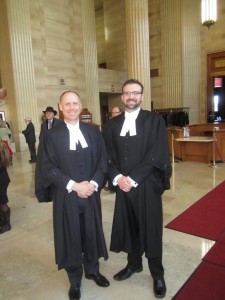 Barry W. Bussey and Derek Ross, Counsel for CCCC (written submissions only) at the attendance of the Loyola High School Case on March 24, 2014 at the Supreme Court of Canada. 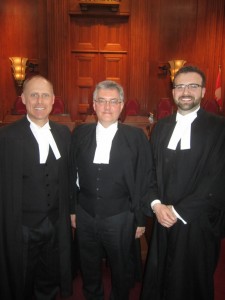 Barry W. Bussey, Mark Philips (Counsel for Loyola), Derek Ross, at the attendance of the Loyola High School hearing on March 24, 2014 at the Supreme Court of Canada.

In today’s hearing Mark Philips, Loyola’s lawyer, informed the Court that Loyola does not take issue with the ERC program, its objectives, and its content.  However, it does object to being told how it is to teach its own religion and how it is to teach the ethics component of the curriculum.  The government demands that Loyola be agnostic in its teaching.  As Philips pointed out to the Court, it is simply unrealistic to expect a religious school to jettison its core purpose and self-understanding – even for a short time.

Justice Abella asked how far a denominational school should be allowed to teach perspectives that are not in keeping with Charter values.

Philips pointed out that Loyola is not asking for a blank cheque and recognizes that religious teachings are always subject to what is best for the common welfare.  However, Abella appeared to be unclear as to where the line was to be drawn between government’s interest to promote a greater awareness of the diverse religious views and the right of a religious school to be exempt from the ERC course.

Justice Rothstein suggested that Loyola’s request for an exemption would require a greater intrusion of the state into religious schools because it would now have to investigate each school on a case by case basis to determine if a school’s proposed curriculum is equivalent to the ERC.

Philips suggested that it would only involve those schools that make a request for an exemption.  The Charter would require that there be a mechanism for accommodating religious belief, and once the school has satisfied the legitimate concerns of the state in its curriculum objectives and content, the state should allow the school the opportunity to carry out its responsibility without the state demanding that it do so in a non-confessional manner.

One of the state objectives, noted Justice LeBel, was to encourage dialogue, and there was nothing in Loyola’s documents describing how this will be addressed.

“If one knows anything about the Jesuits,” quipped Philips, “it is that they are not afraid of dialogue.”  The response brought a round of laughter throughout the courtroom.

Philips pointed out that even if a student opposes the religious teaching of the school and doubts whether God exists, he would still be able to get an A on his paper as long as it was well-reasoned.  Philips was making the point that Loyola is all for dialogue. 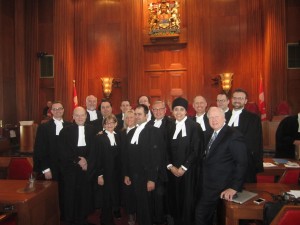 A group shot of some of the lawyers at the Supreme Court of Canada hearing on the Loyola High School case on March 24, 2014.Justice Rothstein wondered if maybe the answer to the matter is to have Loyola hire a non-Catholic teacher to teach the course. In response, Philips argued that once the school meets the objectives and content of the state, the state should not be prying into the beliefs of the teacher.

Justice Abella raised a point of what is equivalent.  She questioned how Loyola’s approach will assist the state’s goal of increasing awareness of diverse religious views and practises when Loyola will be judgmental against those rules and practises.

The problem, noted Philips, is that religion and ethics are the very core of why Loyola exists – Loyola cannot be neutral with regards to religion.  Obviously, Loyola will be more than compliant in presenting the various religious views and practises of other groups– including their ethical positions – but Loyola exists as a Catholic school and must remain true to that since it is the heart of the program.

Justice Moldaver stated that dialogue is “hobbled” if the state has its way and does not allow a teacher to enter into a dialogue with the student about the teacher’s position.  Philips agreed that there is an irony here that under the guise of diversity: the ERC is presenting an agnostic version of diversity; and under the guise of dialogue it is preventing the teacher from entering into dialogue.

Justice Moldaver asked whether the Court has to go down the road of corporate right to religious freedom to decide this case as the case revolves around an administrative decision by the state over whether Loyola’s request to teach a different course was equivalent to the ERC.

Philips agreed that Loyola’s case does not fall or rise on the issue of corporate religious freedom.

After the various interveners presented, Mr. Benoit Boucher, lawyer for the Attorney General of Quebec, presented the province’s position.  Boucher’s main emphasis was that the Minister of Education looked at the whole context and content of Loyola’s proposal and decided that it was not equivalent to Quebec’s ERC program.  For example, there could be no dialogue under Loyola’s regime.

The ERC is a course of discovery, according to Boucher.  The students are encouraged to understand the many different opinions that are out there and develop their own position based on their own values.

Justice Moldaver noted that under the ERC there would be arguably less dialogue because the teacher would not be able to share with the students his or her own position.  Boucher responded that a teacher is one that stands in authority, and there will be no dialogue in the classroom if the teacher says, “Here is what I think….”  The students will not freely express their views under such a program.  The Loyola course and the government’s course is not the same; it is not equivalent.

Boucher stated that the government is not preventing Loyola from teaching Catholicism – they can speak their faith.  Justice LeBel noted that the government may not be preventing them from teaching their faith, but they are compelling them in this course to be agnostic – it might be a “pinch of salt,” but for Loyola it is a very important “pinch of salt.”

Boucher maintained that Loyola has stated that it has no problem with the content and objectives of the ERC and it will not have the effect against their faith as they claim.  The government even gives credit for the teaching of Catholicism outside of the ERC, but for this program it is not to indoctrinate but to teach about the other religious communities.

Boucher argued that Loyola is concerned about the position of the teacher, but there has been no evidence of this issue before the trier of fact (the lower court).  The program is not equivalent by its very nature – and the Supreme Court in the S.L. Case has determined that the ERC program is constitutional.  The government has spent a considerable effort to get the opinions of various experts to ensure that this program would meet its objectives of increasing tolerance and respect of others.  All of the experts support the Minister’s approach.  There is no convincing evidence that this program violates religious freedom.  The course is neutral with respect to religion.  But Loyola is not neutral, and therefore it is not an equivalent course.

He also noted that Loyola can hire qualified teachers to teach this course if they are unable to find a teacher who cannot teach the course in a non-confessional way.  They would be able to ensure that such an outside teacher would not discredit the Catholic faith.  Therefore, Loyola has options to minimize the risks that they have raised on this appeal.  In short, the ERC is neutral and was confirmed by the intellectual experts. The province is flexible for schools like Loyola to teach its religious faith but it cannot do so in a way that would take away from the goals of the ERC curriculum.

I was impressed that the court seemed to be really wrestling with the issues that are raised.  My suspicion is that the Court will try to decide this matter without getting into the corporate religious freedom right.  My guess is that they will make the decision based on administrative law and whether the minister of education has properly used her discretion in making the decision not to accept Loyola’s alternative educational program.  That will be unfortunate, as this is certainly a great opportunity for the Court to finally get to the bottom of the matter of religious freedom for religious groups.  Having a positive decision on this now would be helpful in the future.

It was a great opportunity for me and Derek to meet with other legal counsel, fellowship with them, and discuss the issues.  History was made when both Ruth Ross and her son Derek Ross could be together in court – a mother and son team.  That was such a great thing to see. 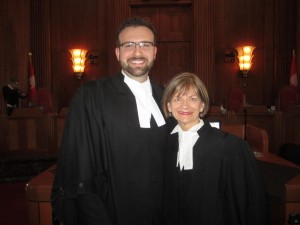 Ruth Ross (Counsel of Christian Legal Fellowship), and her son Derek Ross (CCCC). Mom and son together at the Supreme Court of Canada.

You can watch the hearing at the Supreme Court’s website:  http://www.scc-csc.gc.ca/case-dossier/info/webcast-webdiffusion-eng.aspx?cas=35201