The Oxford Symposium on Law and Religion 2016 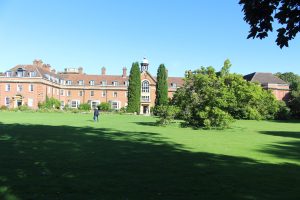 The fourth annual symposium of the International Consortium of Law and Religion Studies (ICLARS) was held September 8-11, 2016 at St. Hughes College, Oxford University. It was a great opportunity to meet with colleagues in the field of law and religion. Over the years I have come to greatly appreciate these meetings for a number of reasons. 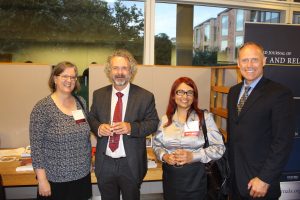 Reasons Why I Go

One is that they allow me to keep up with new research and discussions in the field which helps my own research on the various projects involving law and religion in Canada. Two, it allows me to be reacquainted with old friends and make new friends. Even though we do not agree on every position there is something disarming about meeting a person and discussing with them ideas of mutual concern. It creates dialogue and as we understand each other better we are able to work more effectively for solutions to our common problems. Third, it allows us to meet with publishers about future writing projects to be published. 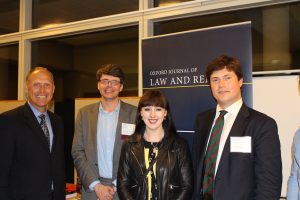 This year’s theme was “Freedom Of For From Within Religion.” A very wide and all-encompassing theme. There were numerous papers presented by scholars from around the world that allowed for a lot of discussion of very different opinions and views.

I again appreciated the importance of this meeting as I did two years ago when I last attended. It is one not to be missed. I know a number of my friends were not able to make it there this time – and they have expressed their regrets for not being able to do so. 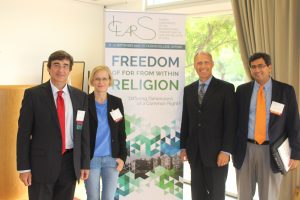 ICLARS is fast becoming the most important professional body of law and religion scholar-practitioners. I encourage all those who teach or study in this area to join and be part of the next meeting. Click here. 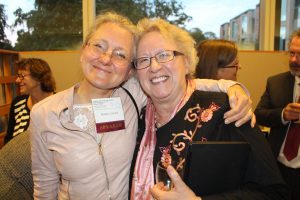 One of the most interesting topics for me was the discussions on “dignitary harm”. This is particularly cogent for my work on the Trinity Western University case and my own PhD research. Here are some of the thoughts I gleaned from the ICLARS meeting and this issue.

A key thought that I obtained while attending the religious freedom and equality presentations was that of Frederick M.Gedicks, of the BYU Law School, who described the concept of dignitary harm.

However, for most cases the cost is widely distributed and not so burdensome for society. For example, the Sikh who refuses to wear a motorcycle helmet because he has to wear a turban will cost society if he is in an accident and he suffers a bodily injury as a result. However, given that the cost is spread out over the entire population that will have minimal impact on society. We are all paying for that cost – especially is this the case in countries with universal healthcare such as Canada and the cost to any one individual is quite small.

There is an argument that government exemption of religious believers from anti-discrimination law constitutes third party harm in the form of dignitary harm. A person’s dignity is somehow infringed by the recognition that government would allow another to discriminate on a ground that forms part of that person’s identity. The LGBT community suggests that such government recognition of a religious exemption from anti-discriminatory law is an unacceptable dignitary harm and should defeat the exemption.

This is a tremendous insight into the TWU situation where, I would argue, the only harm that the LGBT community faces is dignitary harm. It can only be said that they are suffering from the knowledge that there is a Christian university that exists holding to the traditional definition of marriage. There is no actual harm since government is not denying LGBT legal education. There are some 19 common law universities across the country that have no religious qualms on marriage whatsoever. It would seem that our democracy can be flexible enough to allow some leeway for a religious university to hold firm to traditional marriage.

The LGBT argument that they must have access to TWU law school seats without their having to following the religious teachings of TWU is, in effect, the imposition of their view on sexual equality on TWU. Since TWU is not a government run or owned school it denies TWU any right whatsoever to its religious campus.

Justice Campbell of the Nova Scotia Supreme Court rejected the “dignitary harm” argument when he stated:

For some, particularly LGBT people, living in the knowledge that an institution with policies such as TWU’s would have its degree recognized in Nova Scotia, adds to the considerable stress they already experience in their lives. There is an element of stress that is inherent in living in a multicultural society where beliefs and practices that offend majority values are not only on display, but are actively tolerated. (Trinity Western University v. Nova Scotia Barristers’ Society, 2015 NSSC 25, at para. 14) 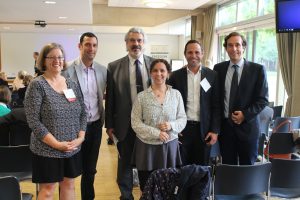 In another seminar I listened intently to Professor Eva Brems, Professor of Human Rights Law, Human Rights Centre, Ghent University, Belgium. Brems argued that anti-discrimination legislation is the state using law as an instrument for cultural change. Such law is the result of a political will that certain behaviour must not be tolerated. Brems suggests that there is a distinct category of human rights that she calls “emancipating rights”. Such rights are intended to “correct a legacy of structural discrimination of specific groups and to provide to members of such groups equal opportunities and equal enjoyment of their human rights.”

When laws seek to change the “stereotypical” concepts such as marriage, family, disability or gender identity, “to a broader range of meanings” then the state can face fierce resistance.  Her proposal to address this situation is to engage a three step test:

When there is a claim to restrict one human right in the name of protecting another human right there must be a way to avoid the conflict by finding a solution that leaves both rights intact.

If there cannot be such a solution then there must be a compromise with concessions from both sides that does not subordinate one right to the other.

If there is no compromise possible then there must be a ranking of the rights in the particular context to determine which right should prevail.  This needs criteria to make that determination.  The criteria she suggests are:

The more severe the interference of the right for person A than person B will mean person A’s right is to be protected at the expense of person B.

While Professor Brems provided an articulate description of a model to resolve the issues of religious conscience against equality claims we are still left with a matter of “says who?” There remains a very significant subjective judgement call that has to be made by the decision-maker as to what would work out best in the circumstance.

Professor Brems gave the example of the municipal worker who would not issue a marriage license to a same sex couple because of her religious views. In applying her test Professor Brems’ conclusion was that it would be better to require the religious conscience to give way to the LGBT rights even in the case where the municipality has a procedure of accommodating those clerks with a religious objection such that the couple would have no idea that there ever was a problem.

That is because law has a cultural change component and to allow exemptions would mean that the law is tolerant of unacceptable views. This is because the protection of LGBT is part of the “emancipation rights” and a behind-the-scenes solution would “would thus come very close to giving priority to religious freedom over equality rights.”

Her solution then is to allow an exemption only for those municipal workers who were already working at the time of the change in the law to continue working but would not allow anyone else who has a religious conscientious objection to be hired. While she recognizes that there is material harm to conscientious objectors “Yet it is light, as no sitting officials lose their job, and many alternative jobs exist for people with similar qualifications. This is combined with a degree of expressive harm, in the sense that through the sunset clause the authorities are expressing the message that they do not support these people’s heartfelt point of view….”

Being able to bounce around these ideas is part of why attending ICLARS is so worth the effort. 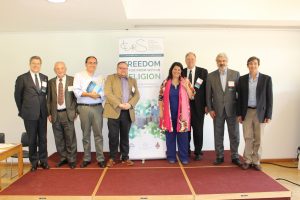