Samaritan’s Purse has long focused on providing physical and spiritual aid to disaster victims worldwide, but never have we been so busy in North America as in 2017.

Floods, wildfires and hurricanes in Canada and the United States forced us to put all eight of our Disaster Relief Unit (DRU) tractor trailers—five in the U.S., the other Canadian units stationed in Alberta, southern Ontario and New Brunswick—into action simultaneously during the month of September.

The DRUs are outfitted with disaster recovery equipment including generators, pumps, hand tools, and safety gear for volunteers. They also serve as volunteer coordination and training centers, and are equipped with a self-contained office, communications system, and other supplies.

All the American DRUs were dispatched to Texas, where they are being used to clean out thousands of homes flooded by the catastrophic effects of Hurricane Harvey.

We drove our southern Ontario DRU—already used in June to help flood victims in eastern Ontario and western Quebec—to Windsor, ON after torrential rain damaged many homes. We drove our other two Canadian DRUs to Florida to help people whose dwellings were flooded or damaged by Hurricane Irma.

In the case of the Alberta DRU, the deployment to Florida was just two weeks after the unit had returned from nearly two months in B.C., where we used it to help clean up after flooding in the Vernon area and wildfires near Williams Lake and Ashcroft.

“We weren’t blessed with these units—funded by our donors—so we could keep them safe in our parking lot,” said Brent Davis, response director at Samaritan’s Purse Canada. “They’re all out there, serving people in Canada and the U.S., and that’s exactly where they should be.”

Every deployment starts with us approaching government and emergency officials in disaster-afflicted areas, or those officials initially approaching us because they’ve already heard about what we can provide. We explain our services, and offer them at no cost to homeowners (all our disaster relief work relies on donations from generous Canadians).

The next step is for local officials to issue us a formal invitation to help. After that happens, we find a church that agrees to host the DRU and, often, a Mobile Ministry Center truck from our sister organization, the Billy Graham Evangelistic Association of Canada. That truck serves as home base for crisis-trained Billy Graham Rapid Response Team chaplains.

These church partnerships are vital to our work, and they serve an important second purpose: to promote Christians and their churches as valuable, contributing members of their community.

“This was our first experience working with Samaritan’s Purse and the Billy Graham Evangelistic Association, and I can say it was nothing short of amazing,” said Gary Karamanoukian, pastor of Hudson Community Baptist Church, in Hudson, Quebec. 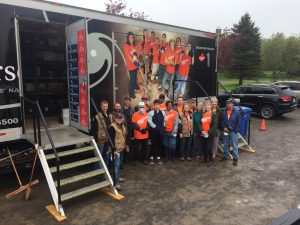 Some of the Samaritan’s Purse team, along with one of our Disaster Relief Unit tractor trailers, in western Quebec where they provided flood relief in May and June 2017.

Hudson Community Baptist hosted us, providing electrical power and Internet access, coordinating meals and accommodations, and supplying some of the clean-up volunteers who worked with us as we helped flood victims in western Quebec.

Once we’re set up at a local church, we promote our services (including a phone number to call) to disaster victims. We do this through local churches, government websites, and the news media. At the same time, we publicize the need for volunteers who can apply through our website to serve with us.

As volunteers step forward, we train them, equip them, and deploy them in teams, with experienced leaders, to clean up the homes and properties of residents who have requested help.

Rapid Response Team chaplains go with the volunteers to offer spiritual and emotional support to disaster victims who are often traumatized and grieving over their loss.

In Canada, most of our disaster response work is flood clean-up. Volunteers, usually wearing bright orange Samaritan’s Purse T-shirts, white Tyvek suits, gloves and other protective equipment, use vacuums, shovels, and brooms to remove mud and water from damaged homes.

Once the water and mud are gone, volunteers remove damaged belongings and flooring, cut away water-soaked drywall and insulation, and finally, spray the entire area to prevent mold. The dwelling is now ready for repair. 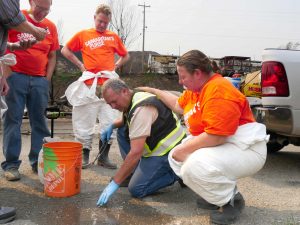 Don Rumball, manager of the burned-out Boston Flats mobile home park in B.C., cleans a homeowner’s silver coins that were found by a Samaritan’s Purse volunteer. Much of our wildfire response work involves sifting through ash and rubble of burned residences, looking for anything that might have survived the blaze.

Grateful homeowners often ask us why we provide all this help at no cost or obligation. This gives Samaritan’s Purse staff and volunteers, and the Rapid Response Team chaplains, opportunities to explain our Christian faith, to offer to pray with the homeowner and, when appropriate, to invite the homeowner to become a follower of Jesus Christ. Those who accept the invitation often start attending one of the churches who have supplied volunteers.

The disaster relief work we do is a blessing not just for the people we are able to help, but for us as well because we remember the words of Matthew 5:16: “Let your light shine before others, so that they may see your good works and give glory to your Father who is in heaven.”

More from Stories of Faith from Canadian Charities