In a devastating decision to religious freedom, the Supreme Court of Canada ruled that a private Christian university is not allowed to open a law school because of its beliefs and practices on traditional marriage.

Trinity Western University is a private religious university in Langley, British Columbia.  It requires students to sign a “Community Covenant” that while they attend the university they will respect the school’s religious teachings, including the requirement that sexual relations are only for the traditional marriage relationship of one man and one woman.  This the law societies of British Columbia and Ontario say is discriminatory and they refused to accredit TWU’s law school proposal on that basis.  The Supreme Court of Canada has now decided that the law societies were right.

The case has roiled the legal profession from the time TWU originally filed its School of Law proposal with the Federation of the Law Societies of Canada back in June 2012.  At the time the Council of Canadian Law Deans wrote a letter to the Federation stating that TWU discriminates against the LGBTQ community and that a proper investigation be made into the proposal.  That letter was then followed up with letters from the Canadian Bar Association, various legal academics and law students against TWU’s plan.  The Federation took the unusual step of appointing a special committee to review the complaints and do a thorough research on the legal implications of TWU’s law school.  In December 2013, the Federation gave its approval when the committee found, “there will be no public interest reason to exclude future graduates of the program from law society bar admission programs.”[2]

That approval was immediately met with a backlash in the legal community who called upon the individual law societies to reject the Federation’s approval and to do their own independent investigation.  That meant the law societies had to repeat the work of the Federation.  It has been a long, arduous process as TWU had to meet with the various law societies that opened up their own 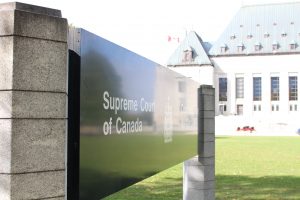 investigations.  In the end, three law societies voted not to respect their own Federation’s decision and to deny TWU accreditation: the Nova Scotia Barristers’ Association, and the law societies of British Columbia and Ontario.  The courts in both Nova Scotia and British Columbia ruled in favour of TWU.  The Courts in Ontario ruled against TWU.  Only the court decisions of BC and Ontario were appealed to the Supreme Court of Canada.

The Law Society of BC (LSBC) v. TWU

In a 7-2 decision the Court ruled that the LSBC’s decision to deny accreditation to TWU was reasonable.  Justices Abella, Moldaver, Karakatsanis, Wagner, and Gascon formed the majority opinion while Chief Justice McLachlin and Justice Rowe each wrote their own concurring opinions.  Justice Brown and Cote wrote dissenting opinions.

In a 7-2 decision the Court ruled that the LSUC’s decision to deny accreditation to TWU was reasonable.  Justices Abella, Moldaver, Karakatsanis, Wagner, and Gascon formed the majority opinion while Chief Justice McLachlin and Justice Rowe each wrote their own concurring opinions.  Justice Brown and Cote wrote dissenting opinions.

The decisions were mirrored decisions with virtually the same reasoning.  Below is the short review of the decision in the LSBC case.

The majority ruled that the LSBC was entitled to consider TWU’s admissions policies apart from the academic qualifications and competence of individual graduates.  The law society benchers have an overarching objective of upholding and protecting the public interest in the administration of justice in reviewing the admission requirements to the profession.  The governing body of the legal profession, being a self-regulating profession, is to be given deference in carrying out the public interest.

In the majority’s view it was reasonable for the LSBC to conclude that promoting equality required equal access to the legal profession, and that supporting diversity within the bar and preventing harm to LGBTQ law students were valid means to pursue the public interest.

The majority had no problem with the LSBC holding a referendum of the members and being bound by that referendum.  Nor was LSBC required to give reasons explaining their decision. The speeches of the benchers were evidence enough to show that the law society was alive to the question of balance.  A decision will be reasonable if it reflects a proportionate balancing of the Charter protection.

The majority decided that the law society’s decision did not limit religious freedom to a significant extent because a mandatory covenant is not absolutely required to study law in a Christian environment in which people follow religious rules of conduct.  Studying law in an environment infused with the community’s religious beliefs is a preference; it is not necessary for their spiritual growth.

Maintaining diversity requires that risk of significant harm to LGBTQ people be prevented.  Public confidence in the administration of justice would be undermined by the LSBC’s decision to approve a law school that forces some to deny a crucial component of their identity in the most private and personal of spaces for three years to receive a legal education.

The majority held that where religious practice impacts others then that must be considered.  In this case the effect of the Covenant restricts the LGBTQ people who feel they have no choice but to attend TWU’s law school.  They would have to deny who they are for three years while in school.  “Being required by someone else’s religious beliefs to behave contrary to one’s sexual identity is degrading and disrespectful.”

The minority decision reminded the court that the only proper purpose of a law faculty approval decision is to ensure that individual graduates are fit to become members of the legal profession because they meet the minimum standards of competence and ethical conduct.  The absence of any concerns relating to the fitness of prospective TWU law graduates means that the only defensible exercise of the law societies’ statutory discretion would have been to approve TWU’s proposed law school.

You can read the full decisions here: