So where does the goal stop? That was what we wanted to know when, as a child, I played hockey on Newfoundland’s wind-swept frozen ponds. We used our old rubber boots as the goal posts, but the longer the game went on, the more we were guilty of moving the opposing team’s posts further apart so that we could score much more easily. It seems the legal academics and advocates are playing the same game with Trinity Western University (TWU).

After a gruelling period of legal wrangling that involved multiple court hearings in British Columbia, Ontario, and Nova Scotia and that culminated at the Supreme Court of Canada (SCC), TWU has been forced to remove the mandatory requirement that students sign its Community Covenant in order to avoid the legal harassment of professional accrediting bodies such as the law societies. However, if you listen to some law professors and legal advocates, that’s still not good enough – they are now wanting to move the goal posts by insisting further changes.

The evangelical Christian community has seen first-hand what it looks like when the promise of a Charter right to religious freedom is undermined by the very profession that claims to be guardians of minority rights. Consider just how well TWU was treated by the legal system.

In 2001, the SCC ruled that TWU’s Charter right was denied when its education degree was not accredited because of its Covenant. Rather than recognizing the 2001 decision as a binding precedent, as is the norm, the 2018 Court barely mentioned it. That was then. This is now.

TWU is a private entity and therefore should be protected by the Charter, but the SCC said that the law societies could self-define the “public interest,” so it was reasonable for them to refuse TWU accreditation because the Covenant was “degrading and disrespectful”.

TWU’s Covenant does not violate human rights legislation, but the SCC devised its own test, saying the Covenant violates the ambiguous and undefined notion of “Charter values” (which dissenting Justices Côté and Brown condemned as the “idiosyncrasies of the judicial mind”). In other words, the SCC’s treatment of TWU no longer depends on the Charter or the rule of law but on the anti-religious sentiments of the legal elite. I’ve spoken before about the growing revolution in the legal community against the law’s traditional accommodation of religion. Religious communities who advocate the traditional marriage of one man and one woman are, at worst, hateful and at best, passé – their beliefs are not on the “right side of history.” 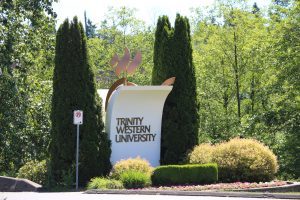 Notice how the Charter of Rights and Freedoms, a prior SCC decision, and exemption from human rights legislation are no longer adequate legal currency to ensure that religious freedom in this case exists in Canada. Now that TWU has removed the mandatory nature of the Covenant for students, the goal post has moved yet again. There is a call for an added dimension: remove the requirement for faculty and staff. Some are also suggesting having a law school that favours Christian applicants is a problem. It seems the concept of a private, religious school is foreign even though such universities pre-date Confederation in 1867. However, even if TWU were to follow through on these new demands it is highly unlikely that that would be sufficient to satisfy opponents – at least not until TWU is no longer a religious institution but one that mirrors all the other public universities in the country. So, what’s the point of the Charter’s protection of religious freedom?  And, can we really call ourselves a multicultural, plural society if we do not allow the diversity that Christian universities bring?

Indeed, the legal revolutionaries are insisting that any religious university that wishes to have a law school must pass the ultimate test: is it in sync with the prevailing views of a legal community which has come to accept the “rule of justice” rather than the “rule of law”?  “Justice” in this new era is defined on a case-by-case basis as determined by the academic and the assumed popular opinions of the day. We should be under no illusions: current legal academics have the monopoly on legal education and they are loathe to allow space for a Christian university. They want it all.  And so far, they have it all. TWU represents a threat to their hegemony.

If ever we need a Christian law school, it is now. We have seen the extent to which the legal elites maligned the Christian community in the TWU law school case. The profession is clearly in need of more young lawyers who respect and understand religious diversity and civil debate. Should TWU, that irritating crack in the legal ice rink, file another application for their law school, we will see just how tolerant the legal community is. I hope TWU does file a new application (and, if they don’t, we need another Christian university to take up the cause).

One way or another it is time that the legal profession recognizes its responsibility in allowing for the full extent of the promise of religious freedom in the Charter. That freedom can only be temporarily frustrated. I am hopeful that eventually Canada will join with the other liberal democracies that practice English Common Law, such as Australia and the United States, and allow Christians to have their law school. That will be a positive move that respects diversity and will encourage open, honest and full debate within the legal academic context as together we all participate in understanding what it means to be a free and democratic society – one that does not keep shifting the goal posts.