Sending a Message to TWU: Your Graduates Need Not Apply 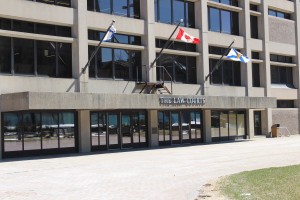 I observed history last week at the hearing of the Nova Scotia Court of Appeal in the case of Trinity Western University School of Law (TWU). Over twenty lawyers were crammed into the Court Room on the 5th floor of The Law Courts, in downtown Halifax. It seemed only a short time before when I was there with my colleagues for the first hearing before Justice Jamie S. Campbell in December 2014. Justice Campbell ruled in favour of TWU, saying that the Canadian Charter of Rights was not a “blueprint for moral conformity.”[1] His decision was a stinging rebuke to the Nova Scotia Barrister’s Society’s (NSBS) refusal to recognize the TWU law degree. Campbell held that TWU’s religious freedom was unjustifiably violated. Not surprisingly, perhaps, the NSBS appealed his decision. 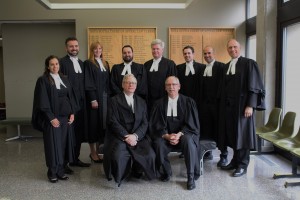 As I listened to the arguments of the Society justifying their denial of the TWU degree it was evident that a major purpose of their rejection was to send a message to TWU. However, the practical effect of that decision denied TWU law graduates the ability to practise law in Nova Scotia. The graduates are to suffer the ire of the Society for TWU’s religious position on marriage. According to Jill Perry, president of the Nova Scotia Barristers’ Society, the decision was “not about penalizing TWU graduates.” Rather, “[i]t’s about sending a message to the university that we as a law society have a problem with your admissions policies.”[2]

The NSBS is offended[3] by the Christian law school’s admission policy that requires students to sign a Community Covenant that commits them to maintaining a lifestyle that would abstain from, “sexual intimacy that violates the sacredness of marriage between a man and a woman.”[4]

The Regulations governing the Society stated that a “law degree” was defined as that degree approved by the Federation of Law Societies of Canada. The Society’s lawyers admitted that the Federation’s approval meant that the TWU degree was an approved degree in Nova Scotia.  However, given the context, the Society did not want to recognize the degree. The Society held a Council meeting on April 25, 2014 and voted 10-9 not to approve the TWU program unless TWU either exempts law students from signing the Covenant or amends the Covenant “in a way that ceases to discriminate.” 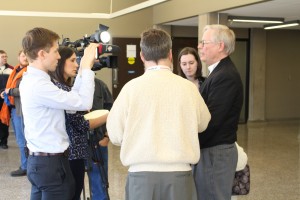 Unfortunately for the Society, it had no authority (and this is the matter of contention) under its own regulations to deny the degree on the basis of a law school’s admissions policy. Therefore, changes had to be made to the Regulations under the Legal Profession Act in order to legitimize the April decision. It was not until July 2014 that the Regulations were amended.

Notice the order of events here: first, the law school is approved by the Federation and as a result it is a lawfully recognized law degree in Nova Scotia; second, the NSBS does not want to recognize the law degree because it does not want to “condone” TWU’s allegedly “discriminatory” admissions policies; third, the Society’s regulations do not give the Society authority to disapprove the degree so it subsequently amends its regulations in July to retroactively support its April decision. One would have thought that the better approach would have been to make the changes in the Regulations first and then make a decision – but hindsight is always 20/20.

Now, in July 2014, the Society amends its regulations to say that after the Federation approves a law degree it will be recognized as such in Nova Scotia “unless Council, acting in the public interest, determines that the university granting the degree unlawfully discriminates in its law student admissions or enrolment policies or requirements on grounds prohibited by either or both the Charter of Rights and Freedoms and the Nova Scotia Human Rights Act….” (Emphasis added.)

Notice the word unlawfully. This is very important and it was picked up by the judges on the Court of Appeal.

The problem is this: TWU’s admissions policy is not “unlawful”! This is what Justice Campbell found in his January 2015 decision. TWU does not violate any law because it is exempt from both the Charter and the BC human rights legislation. Therefore, even on the basis of the Society’s own regulatory amendment, TWU is absolved from any legal challenge!

The irony is that these regulations were written by the very governing body of the legal profession. It did not help the irony any when the Advocate’s Society, whose tag line is “promoting excellence in advocacy,” called on the Court to simply cut through the “weeds” of argument about the meaning of the word “unlawfully” and allow the NSBS the latitude to do what it wants! As lawyers, words are our bread and butter; rarely do we treat them as mere weeds.

When confronted with the problem of using the word “unlawfully” the lawyers supporting the Society’s position tried a number of approaches. First, they argued that the admissions policy would be “unlawful” under the human rights legislation in Nova Scotia. However, the justices did not appear convinced with that answer. It troubled the Court that the policy was not of a law school in Nova Scotia but in British Columbia. There is an obvious problem with extraterritoriality. Simply put, how can the Nova Scotia Barristers’ Society rule on matters in BC? It is outside of their jurisdiction.

Second, they argued that the Society’s decision, in and of itself, being made in Nova Scotia, was bound by the Charter and the Nova Scotia Human Rights Act. Not to make a statement against TWU’s discrimination, they said, would be to condone that which is against “Charter values”. Charter values was argued to include the view expressed by Justice Abella in the Loyola [5] case as being concerned with “equality, human rights, and democracy.” TWU, it was claimed, discriminated against the LGB community with its admissions policy.  Therefore, it was against those three “Charter values.”

The issue of condoning is peculiar. The Society argued that if it accepted the TWU law degree it was condoning TWU’s discrimination. That simply does not flow. The locus of the Society’s work, in reviewing those wanting to practice law, is to ensure that they are competent with the requisite skills to practise law not whether their religious beliefs are acceptable. A government’s approval, or an issuance of a professional license does not mean the state actor is thereby approving the person’s religious beliefs or the beliefs of the institution where they were educated. To say otherwise would require the government coming up with its own list of acceptable religious beliefs and practices and then use it as a guide or a measuring stick to ensure it is fair. Does that not appear odd? Where would such an inquiry end? Will it matter only for professional licenses such as law? What about nursing, or teaching? What of other non-professional licenses such as driving? Or, what about the issuing of charitable status to churches and other charities – does the issuing of charitable status thereby imply government acceptance of the religious beliefs of the organization? 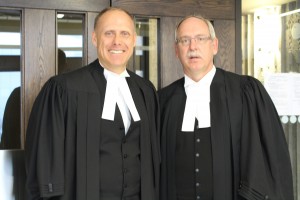 It is apparent the Nova Scotia Barrister’s Society has a “tough row to hoe” on this one. And so they should. Rather than allow for a Canada that protects both the religious freedom right of Christians and the equality rights of the LGBT community in tandem, the Society decided to choose equality at the expense of religion. As my friend, Albertos Polizogopoulos noted, “[t]his is inclusion by exclusion….”[9]

The reality is we have a constitution that protects both rights. Ours is a society where we must be able to live peacefully on the same real estate. The right of all Canadians is to live their identity to the full. That may mean that there are some who are uncomfortable with the views and practices of others. However, if the Charter means anything it is that we are obliged to respect the rights of everyone.

The message that the Barrister’s Society sent, though it may not have intended it as such, was that any TWU law graduate that holds the traditional view of marriage is not welcome in Nova Scotia.  That is unfortunate. I would hope that the Nova Scotia Court of Appeal now sends a message to the Society that affirms Justice Campbell’s decision that “[l]earning in an environment with people who promise to comply with the code is a religious practice and an expression of religious faith. There is nothing illegal or even rogue about that. That is a messy and uncomfortable fact of life in a pluralistic society.”[10]

The CCCC factum filed at the Nova Scotia Court of Appeal can be found here.

[4] Trinity Western University, “Community Covenant Agreement: Our Pledge to One Another.”

Thoughts on Sending a Message to TWU: Your Graduates Need Not Apply