Locating an office: Why ours is in Elmira, ON

The CCCC office in Elmira, ON

Why is a national association headquartered in Elmira ON? The answer will make you laugh (you’ll want to read to the end). I get asked this question a fair bit as I travel the country and the answer is always a shock to everyone. CCCC must be the only ‘business’ in Canada that can say this, but the truth is, we are here because of the excellent, outstanding service offered by the Elmira Canada Post Office! “Are you serious?” you ask.

Yes, it’s true. My predecessor Frank Luellau lived in Elmira and had the CCCC office in Kitchener. Back in the days when everything was done by mail, we produced lots of it. Frank would drop it off at the Kitchener post office on the way home and got what he considered to be pretty bad service (I don’t know the details). So he started dropping it off in Waterloo which, for those who don’t know, is between Kitchener and Elmira. But he got less than adequate service there too. So he started driving all the way home and stopping in at the Elmira post office. Overnight, CCCC became their largest customer. Voilà! He got superb service. It didn’t take long before he began to wonder why he was driving all the way to Kitchener every day, and he moved the office to Elmira, to be closer to the fabulous Elmira post office (and, I suppose, his home).

Why do we stay here? We don’t produce nearly the volume of mail that we used to, and a lot of what we do produce has been farmed out to mailing companies. But when we do have a mailing to send out from our office, we still get terrific service from our local post office.

Elmira is a great place

There are other reasons to stay too. Elmira is, quite simply, a nice place to be. It is in Woolwich Township, about ten minutes north of Waterloo, so it is in the country a bit. And since I live in Waterloo, that gives me a nice drive in the country every day, and against traffic both ways. (The country drive is a positive most of the year except when the farmers are spreading manure!)

The rent is very reasonable. We pay full freight, but it is still half the cost of being located in Waterloo.

Elmira is a great place for families. About half our employees live in Elmira and the immediate environs and really enjoy raising their children here.

Finally, Elmira is about as crime free as a place can be. Elmira’s weekly paper, The Observer, has a column called Law & Order that I find a lot of fun to read. I don’t think a spin-off show called Law & Order: Elmira would hold its audience for very long. The level of crime around Elmira is hardly serious by anybody’s standards. Here is a sample of police reports from this week’s column:

8:15 AM        A 27-year-old Milverton woman was making a left turn from Schumer Line into a private driveway in a buggy when her horse turned abruptly and collided with a 2007 Honda driven by a Linwood woman in the oncoming lane. The horse required euthanasia, and a member of the Linwood fire station was on hand to tend to the horse. There was minor damage to both vehicles. No charges were laid.

10:25 AM        A stray horse caused a traffic tie-up when it got spooked and broke free from the hitching post where it was tied on Industrial Drive in Elmira. The horse darted across Arthur Street, directly into the path of an oncoming pickup truck, driven by a 46-year-old Elmira man. Jay Rice, youth pastor and Elmira resident, saw the horse and set off on foot to catch up with it. When police arrived, Rice was holding onto the horse by its bridle to stop it from running farther. The truck suffered significant damage, while the horse suffered minor injuries.

2:03 PM        A box containing a teddy bear, four eyeglass cases, a stack of Valentines Day cards, a baseball glove and golf balls was found, left under a tree on James Court in St. Clements. A St. Clements man reported that while he was packing up to move, another man grabbed a box of his belongings, jumped into a vehicle and fled the scene. The box was later found under the spruce tree on a nearby lawn. The belongings have been returned to their owner.

Folks, that second story occurred very close to our office, but I can honestly testify that I never ever felt I was in any danger at all!! And if you don’t believe the horse and buggy stories, well here’s the view from my office window (for real). 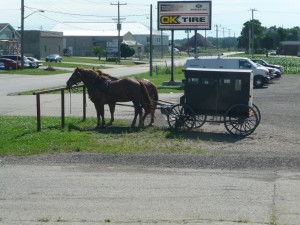 The view from my office window, July 2008

Since this picture was taken, we’ve moved just down the street, and the hitching post for our new building is on the opposite side from my office window. Alas!

Someone once applied to work at CCCC and when I asked why they wanted to work for us, the job applicant answered, “Well, you are in Elmira, and I would like to enjoy the slow pace of country life.” That person was not hired! It may be a slow news day in Elmira, but it is never a slow day in our office.

Anyhow, that’s why we are in Elmira – the excellent service of Canada Post! Sometimes we don’t need to do big strategy sessions or market research. Sometimes decisions are made for very simple, ordinary reasons that may even seem arbitrary, but they work out well and that’s all there is to it. Not every decision needs to be a big deal.

Now what about you? Is there a reason why you are located where you are that is for a somewhat off-beat reason? Is there some other decision your ministry has made for surprising reasons? Let’s hear the stories.