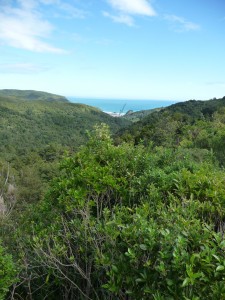 Visiting New Zealand is like visiting another planet, but without the space travel!  The land forms (hills) and colours (grass) are so different in places they seem unnatural.  Here is what I did in the four days I was there, and some impressions from the first country on my trip – the land of the Kiwis. 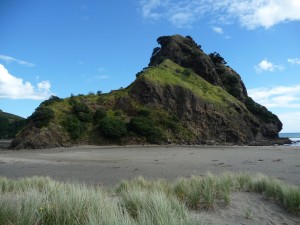 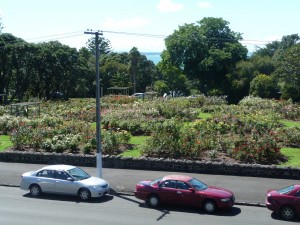 The view from my hotel in Auckland

My flight left Toronto Sunday night and I got into Auckland Tuesday morning (with my baggage). Since I’m only traveling west, I guess I’ve lost a day forever! So far, jet lag and time zones haven’t been an issue for me. I go to bed and get up at the times I usually do.

Driving on the left is not difficult. I practiced turns and staying on the left in the rental car parking lot for a bit before venturing out into the real world. I kept saying to myself, “Stay left, stay left,” and I concentrated wholeheartedly on driving. After a few hours I felt quite comfortable with it, although my heart did leap once or twice when someone came out of a side street on the right and turned left. My first reaction a couple of times was “He’s going to hit me!”, but of course the car was turning into the lane on my right side.

They have a basic rule that makes driving a lot less stressful: you always give way to the right. If you get hit on the driver’s side, you are at fault. There is never any wondering who got there first or whether someone will try to dart out in front of you. Roundabouts are a breeze! Seems to me a Kiwi driving in Canada would likely get smacked because they’d naturally expect the other person to wait for them.

I met with some very interesting people: Frank Claridge, a director of the Charities Commission and a very entrepreneurial charity leader himself; Warwick Worth, coordinator of Christian Compassion Ministries (a one-man charity supporting work in the Philippines with orphaned children); Wayne Mulqueen, head of Ministry Strategic Development at Focus On The Family; Kelvyn Fairhall, administrative leader at the Baptist Union; Glynn Carpenter, National Director of Vision Network; and David Bush, General Secretary of the Methodist Church of New Zealand. I also went to a place called, no kidding, Pukekohe, and had dinner with a now former CCCC employee, Mark Stutzman and his wife Emily. They emigrated to New Zealand in January and it was great to see that they are well established and have a circle of new friends.

I won’t be reporting on the research I am doing in this blog because I want to wait until I’ve seen everybody and then reflect on what I’ve found out. The results will find their way into CCCC publications. However, I can say that there was a consistent view of the charity sector held by every person. Each corroborated the other without knowing what the others had said. There was no conflicting information, which I found surprising. Usually there are different perspectives.

Some conversations went well beyond the research questions and gave me things to think about in terms of people speaking some intriguing ideas into my life. One person said, after talking at a more personal level, “After all, a sabbatical is about you and not the ministry.” That is true, and some of them had some interesting perspectives that both challenge and excite me for my own growth. One idea was around taking the long term perspective, perhaps forty or fifty years out, of the consequences of decisions made today. People tend to solve problems in the short term but are unaware of their long term consequences. Another idea was that as a leader, I should be sowing seeds that influence people inside and outside of the ministry. I know this already, but it was put out in such a way that it had a freshness of potential that seemed new. A leader should be influencing the outside world as much or more than the world inside the organization.

For touring, I went up the SkyTower, 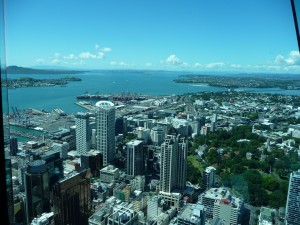 visited a volcano right in the city (Mount Eden – I hope it is extinct!), 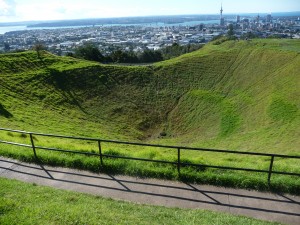 toured Devonport (it’s just one big cafe as far as I can tell but it had some interesting architecture and a banyan tree), 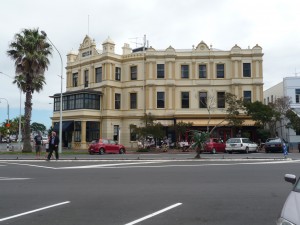 went to Piha beach (I’m sure there must have been several movies filmed here – the setting just demands to be in a ‘lost on a remote island’ movie), 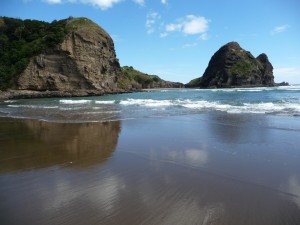 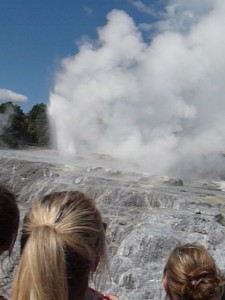 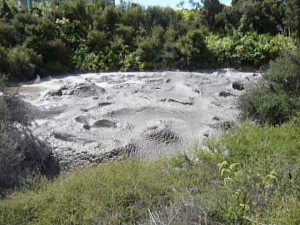 had dinner in Waihi with Glynn (a gorgeous drive up from Rotorua), and went to a couple of caves in Waitomo (thousands of glow worms on the roof make it look like you are looking at the starry sky).  You can’t take pictures of the glowworms because any light causes them to stop glowing for many hours. 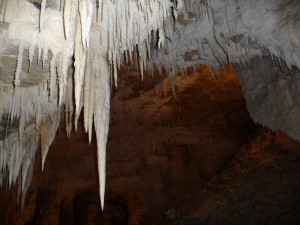 It takes longer to get anywhere than you might think. They have one highway out of Auckland that is like a North American freeway, but it ends after about 30kms. Other highways are really two lane roads with lots of tight twists and turns. Getting behind agricultural equipment, transport trucks or Mauri protesters (I encountered them all) can easily add up to an hour depending on how far you are going.

However, to compensate for the slow drive you can enjoy the most fantastic scenery you’ve ever encountered!! The grass is not green as in North America, but a yellow-green. The colour gives the countryside a very surrealistic, other-worldly look. Add to that hills that are just everywhere, mounds, pillars, mountains, the whole works all jumbled together and you have a unique landscape. There are trees and vegetation I’ve never seen before. It really does have some landscapes worthy of a science fiction movie set (or perhaps a fantasy, such as, say, The Lord Of The Rings). I have no pictures of the landscapes because I’m driving alone, it is against the law to stop at the side of the road (there are no shoulders anyway), and they’ve apparently never heard of scenic lookouts. There were many breath-taking vistas I wish I could have recorded, but that wasn’t possible. 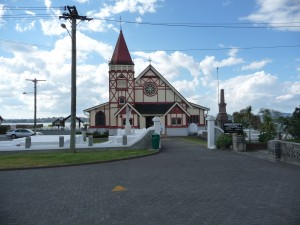 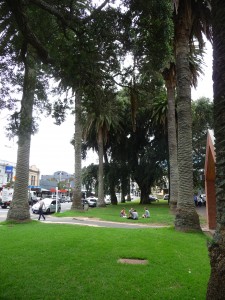 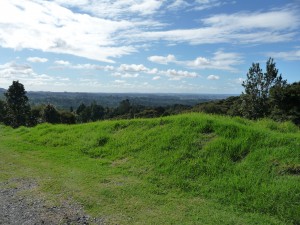 Somewhere on the North Island of New Zealand

I ate at one Indian and two Thai restaurants. I was surprised how multi-ethnic New Zealand is because I thought they had a very restrictive immigration policy. However, that policy ended some time ago.. I thought it was just Mauri and WASP, but Auckland seems to have almost a majority of other ethnicities. By the way, the many issues related to the Mauris (which do seem quite overwhelming according to reports I was given) make anything we have here in Canada with either Native Americans or Quebec sovereignty issues pale into insignificance!

New Zealand is a very expensive place. A small bottle of pop is $3 and gas is $2.50/litre. That’s in NZ dollars, but it still is much more expensive than in Canada. A full tank of gas in a mid-sized car cost $107!!

New Zealand is much more British than Canada is, using British terminology for everything. It made Canada seem positively American as I came to see how many things have different names and how much the U.S. and Canada share in common in contrast to New Zealand. New Zealand is also much more European than Canada in the kind of vehicles you see. Especially obvious are the little vans and trucks that are all over the place here and in Europe.

The devastation in Christchurch is on everyone’s mind as a long term recovery project. But that didn’t keep them from also being concerned about Japan and its problems.

My time with the Kiwis ended Friday night as I left for Australia. That’s another difference with Canada. We don’t like to be called Canucks (unless you live in Vancouver and like hockey); we are Canadians. They are New Zealanders but always refer to themselves as Kiwis.

In short, the weather was beautiful, the people were very enjoyable, and the scenery was spectacular. Go see for yourself!