I arrived in Lilongwe, Malawi Thursday at noon and enjoyed my stay with some missionary friends.

The land is very, very beautiful. I travelled north to Dowa, south to Dedza and east to Salima and Lake Malawi. The hills are beautiful, the landscapes quite interesting and the variety ensures there is always an interesting view. 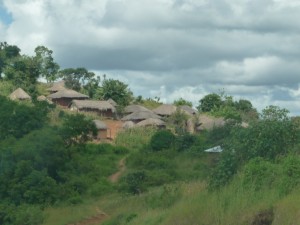 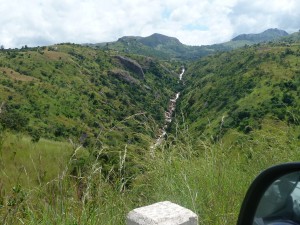 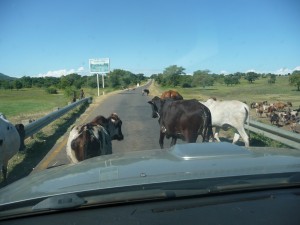 On the highway to Lake Malawi

I must say that I saw the most honest advertising I’ve seen anywhere in the world, ever. Look at this marketing slogan. 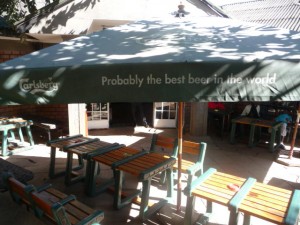 Truth in advertising: “Probably the best beer in the world”

People here need help, and in that respect, I visited two ministries that are doing great work.

Patrick Laforet and his wife Ann took me to the Dowa clinic of Lifeline Malawi. This was very impressive. It is important to note that Malawi has 14 million people and 250 doctors, about 100 of whom are in administrative positions and are not practicing! That’s 150 doctors for 14 million people. If Canada had the same ratio for doctors, we’d only have 364 doctors. Imagine that! So Lifeline Malawi has stepped in to fill the gap. 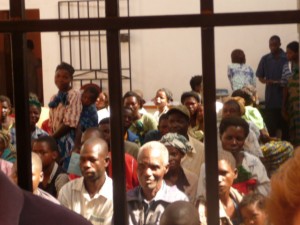 Patients at a Lifeline Malawi clinic

The clinic was full and had a long waiting line. Every person would be seen that day, no one would be turned away. It was humbling to realize how far some of these people had come, and how much community effort, in some cases, it took to get them here.

Lifeline Malawi was founded in 2003 by Dr. Chris Brooks of First Assembly Church in Calgary, who visited Malawi and saw the great need for medical help. The budget of US$150,000 six years ago has grown to $2.1 million today and a staff of seventy people. In total, last year 157,000 people were seen at the clinics.

Lifeline Malawi partners with others to provide holistic support to remote communities that includes healthcare, education, water and sanitation, and food. By keeping parents healthy, they are helping to reduce child labour. 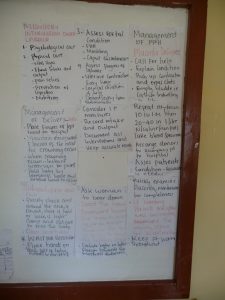 Instructions for the birth process in the delivery room 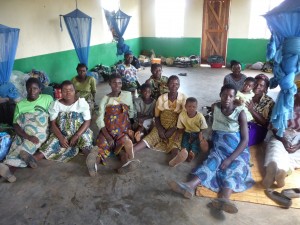 This was a really happy group that got serious for the picture. Each expectant mother had a supporter from her village staying while they waited to give birth.

One interesting fact is that for $7 per mother, the maternity clinic they run can help prevent the transfer of HIV/AIDS from mother to newborn. The success rate in the country is 60% while the clinic has an 86% success rate. This was the greatest hope I saw in Malawi, that the spread of the HIV/AIDS disease can be stopped at least inter-generationally and thus a new generation has a chance of growing up without it.

We drove out to a remote clinic that is visited (I believe) on a weekly basis. Pat and Ann don’t get here often, but it was obvious the villagers really like them and they received an enthusiastic response from everyone. People waved at us as we drove by. 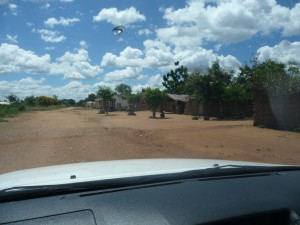 The village with a remote Lifeline Malawi clinic 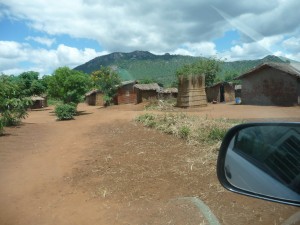 Another view of the village

What a surprise we had when we got there. The two mud huts that are used for the clinic were abandoned and fallen apart. 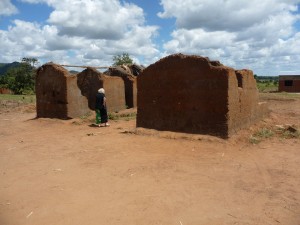 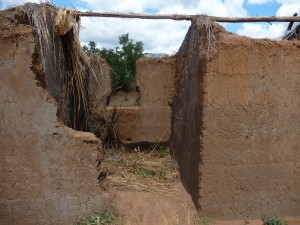 But there were two large modern buildings decked out with real windows and doors, proper drainage and so on. They were very well built, but not yet finished. 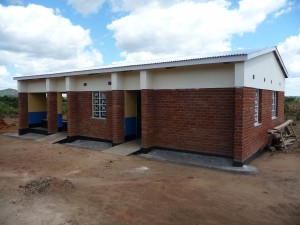 What was going on here? We greeted the villagers who were there, and it didn’t take long for word to spread and in about twenty minutes an elder and someone who spoke English came to greet us. It turned out that these villagers had an abundance of gumption and initiative. They went together with 23 other villages, applied to the government for money and got it, and built themselves a clinic and a doctor’s house! I doubt they will have a resident doctor in the foreseeable future, but they have tangibly demonstrated their faith that one will come (a la if you build it….). The half-finished clinic is already in use.

The other ministry is Village of Hope. My friends David and Connie Buzikievich are the directors. 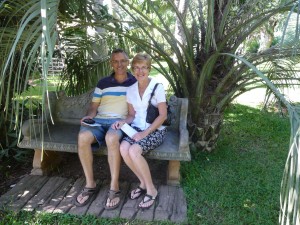 David and Connie Buzikievich, directors of Village of Hope – Malawi

This ministry accepts kids who are either orphans or whose parents and extended family cannot care for them. Some come as almost newborns (who are very expensive to accept because of the level of care needed) and others are older children. 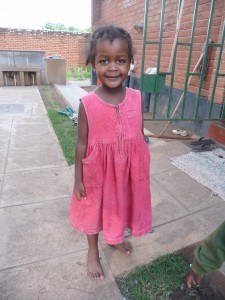 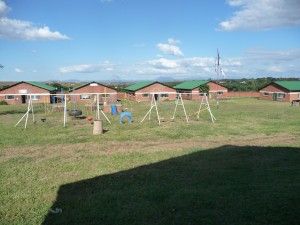 Houses at Malawi’s Village of Hope 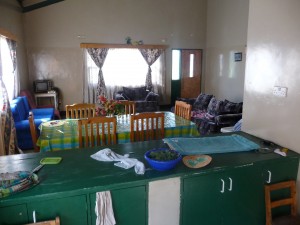 The houses are all the same inside

They live in their own little village of about eight homes with eight children to a household. Each house has a live-in ‘mother’ and an ‘auntie’ who works during the day. The children attend school and receive a lot of love. Each child is being nurtured to ensure they have the greatest possible opportunity to lead successful independent lives when they become adults.

I saw many of the kids as I walked the grounds of Village of Hope and toured some of their homes. They were happy, played very well together, and seemed to have a good level of confidence in themselves, as they stepped forward to greet me or to approach David and Connie to share something special with them. The most important contribution that Village of Hope is making is not just that these kids are being given a better life, but that their values and attitudes are being developed in ways that will improve Malawian culture as they grow up and participate in society. These kids are learning to care for themselves and their property. They are learning respect and resourcefulness. The Buzikieviches have dreams to build more housing to offer a different model of accommodation to those who reach 18 years of age and want to stay longer while they pursue their education. They will be in as-yet-unbuilt transition houses where they will have to do their own housekeeping, laundry, cooking and shopping (with four to a house, I believe). Village of Hope is helping a new generation of Malawians break the culture of dependence that their elders have accepted. This is a country that has never known a war, either with another country or within their own country. The only thing this country needs to become viable and sustainable is a new attitude, and that is what Village of Hope is contributing to in its own way.

Staying with David and Connie, I had a first-hand look at the life of a missionary. All I can say is, when they wake up each day they have no idea what the day will hold for them! They are on constant call for anything and everything. I had the pleasure of meeting some other missionaries, Harlyn and Helen Purdy, and I would say they and the Laforets would all have the same experience with unpredictability.

Something I found amazing at Village of Hope and elsewhere in Malawi is that I saw quite a few people wearing heavy Canadian-style winter coats!! Yes, it was only in the low eighties, but for Malawians, that is cold! So when people say, “Don’t ship winter clothing to Africa,” realize that while what I’m about to say sounds counter-intuitive, don’t believe that advice. They really do need winter clothing.

I left Malawi on Monday at noon for my final African destination, Johannesburg! I’ll write soon about my visit there.