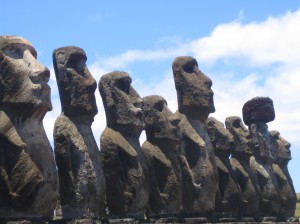 What on earth were the Easter Islanders thinking when they chopped down the very last tree on their island? How were they going to cook the next day? What would they use to build their huts? Their canoes? How could they have done such a dumb thing!!! This is a question Jared Diamond asks in Collapse: How societies choose to fail or succeed

, and his answer details the mistakes they made, some of which are mistakes that ministry leadership teams could make as well. Diamond says that civilization on Easter Island died because of two primary factors: 1) human environmental impact, especially deforestation and destruction of the bird population; and 2) the political, social and religious factors that were the driving motivations behind the destructive behaviours. Why didn’t they see they were on the road to destruction? That’s the topic of this post.

Read the book for a fascinating explanation of what happened on Easter Island and Pitcairn Island, why there are no more Mayans and why the Vikings died out in Greenland, why the Dominican Republic and Haiti share the same island but are in such different circumstances, the real story behind the genocide in Rwanda, the disastrous conditions that exist today in China and Australia, and what all this means for our civilization. We can avoid disastrous decisions if we learn from history.

Diamond says the factors that contribute to poor decision making are: