Leaders and their families

The movie Courageous opens tonight and every father or guy who thinks he might be a father some day should see it. Leaders especially need to see it because we travel so much we could easily become absent fathers even with the best of intentions. I saw the preview a few weeks ago and it is funny, poignant and powerful and has some exciting police action along with the suspense of a plot line that you know is going to end in trouble. And there is a clear call for men who are fathers to step up and fulfill their responsibilities.

Dads and their kids

I’ve seen a fair bit of research over the years that shows how important fathers are to the development of their children. A contributing factor to many of our social problems turns out to be the lack of a father in a person’s life. I admire single parents who are able to raise their children on their own and I know they do their best. But there is no doubt that the best family experience is when a mother and father live as Christ-like parents caring for and nurturing their children together. Courageous shows how five fathers, in different scenarios, come to a place of decision about their role as fathers.

This is the fourth movie by Sherwood Pictures, a ministry of Sherwood Baptist Church in Albany, Georgia. Every one of their movies (even the first one that was done for less than $20,000) has been excellent. Flywheel dealt with coming to faith; Facing the Giants with maintaining faith through adversity; Fireproof with marriage; and now Courageous with fatherhood. You have to hand it to this church, they have done a wonderful job of developing a creative outreach ministry against all odds.

Leaders and their work

Leaders need to ensure that the way they lead at work does not cause their employees to be unable to fulfill their duties to their spouse and children. In some environments, particularly large global consulting firms for example, I have heard people talk about the employer’s demands that they put their career ahead of their families. People at any level of leadership may self-impose demands on themselves that effectively put their work ahead of family too. They need to set appropriate boundaries for how much claim their ministry will be allowed to have on family life. Several years ago one president told me he divided the week up into 21 blocks of time (morning, afternoon and evening) and would give his ministry up to 12 of them (or perhaps he said 14). He would not go beyond that for the sake of his health, marriage and family.

From 1994 to 2001 I was self-employed and working from home. I discovered that in that situation, not only was there no separation of home and office (I did have a dedicated office in the house, but it was in the house), but there was also no sense of ever leaving work. Who’s to say when the job is done? It was never done. There was always more that could be done. And then there is the feeling of achievement from work that can become addictive. I ended up not being as ‘present’ as I wanted to be with my family. Boundaries are the foundation for a well-balanced life. They should be augmented by a clear set of priorities that will help you and your family make decisions in those seasons when work and home schedules collide.

The movie Courageous shows the dads signing a covenant that outlines the principles of fatherhood that these men will follow. I have to admit, my very first thought was that this was a cheap marketing ploy. They probably already have these in stock ready to sell by the thousands. (However, as of today, they don’t appear to have done this.) My second thought was that I wouldn’t sign the covenant because it would be a mass event sort of thing and who wouldn’t sign it? It wouldn’t be meaningful because it would be an event rather than my personal commitment. I thought it would be better as a personal commitment. “Just do it. Just be the father I aspire to be.”

I believe the best outcome of the movie will be that dads sit down with their families and talk honestly about their relationships with spouses and kids. It’s never too late to make a course correction. You can’t change the past, but you can change the future. 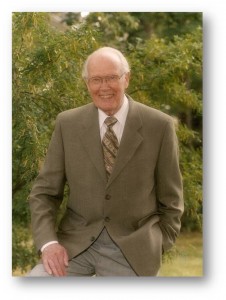 My dad died a year ago this week, and I have such good memories because I committed years and years ago to being the best son that I could be. Your children and mine deserve a similar commitment from us, that you and I will be the best parents that we can be. Your ministry is important, but so is your family. You are replaceable at work, but not as a parent.