Enduring all the praise and adulation

I arrived at work this morning, opened up my email, and suddenly felt a rush of great feelings, like I had passed a test or something. Here’s what I saw in my in-basket.

Wow! That’s high praise! It doesn’t get better than that, except that the Jesus who endorsed me is American of Spanish descent and pronounces his name “Hay-sooss”. While I value his endorsement, it’s not quite the same as the one I thought I had for a moment!

It’s nice when we recognize one another for things we do well. Receiving praise is an affirmation of your accomplishments and skills. When you are praised, it is feedback that you are doing well in the eyes of another. And, it’s one thing for you to think you are doing something well, it’s quite another to have someone else say so. (That’s why CCCC sends endorsements of our Certified members to their donors!)

I already had a draft post from some time ago about leaders receiving praise from others, so here it is.

Isn’t it hard to put up with all the praise and adulation you get wherever you go? Don’t you wish you could just spend even one day incognito and avoid all the people pressing in to tell you how great you are? Oh right, that’s the fantasy world! 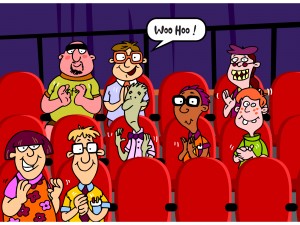 But in this real world, as a ministry leader you probably do receive both praise and criticism for your leadership. I’ve already written about how leaders should deal with their personal critics, so now I’d like to address the more positive side — receiving personal praise. How should Christian ministry leaders respond when people praise them as individuals? Let’s contrast Herod’s response to praise to that of Paul’s:

A 😥 Example: On the appointed day Herod, wearing his royal robes, sat on his throne and delivered a public address to the people. They shouted, “This is the voice of a god, not of a man.” Immediately, because Herod did not give praise to God, an angel of the Lord struck him down, and he was eaten by worms and died. Acts 12:21-23

A 😀 Example: When the crowd saw what Paul had done, they yelled out, “The gods have turned into humans and have come down to us!” The people then gave Barnabas the name Zeus, and they gave Paul the name Hermes. The crowds wanted to offer a sacrifice to Barnabas and Paul… When the two apostles found out about this, they tore their clothes in horror and ran to the crowd, shouting: Why are you doing this? We are humans just like you. Please give up all this foolishness. Turn to the living God. Acts 14:11-15

Paul remembered that he was not doing anything in ministry on his own, but that the source of his authority over demons, of his healing power, and of his preaching was the God he served.

Dictionary.com defines humility as: the quality or condition of being humble; modest opinion or estimate of one’s own importance, rank, etc. Synonyms are lowliness, meekness, submissiveness.

This may be a good secular definition, but I think a good Christian definition of humility would be: an ever-present awareness of God’s constant help in everything one does.

Remember that you are God’s handiwork, created in Christ Jesus to do good works which he has prepared in advance for you to do (Ephesians 2:10). Given that, what have you to boast about? If you are leading a life of prayer and listening, you are being led by God. You are simply following what he has laid out for you.

Here are a few things about praise to watch out for that could get you into trouble:

Doug Britton writes in his online Bible study on humility that when you are humble, you are free from pride and arrogance and you will have a realistic assessment of yourself. He makes the excellent point that you know that in your own strength you are inadequate, yet you also know who you are in Christ. Don’t minimize who God has made you to be. Don’t shy away from the role he has given you. False modesty could hold you back from what you could potentially accomplish.

Use everything God has equipped you with and use it confidently!

But also know that the extra ‘oomph’ that brings the success is supplied by God working through your weaknesses (2 Corinthians 12:9).

I remember I always used to point out (and still do more often than I wish) how whatever the person was praising actually wasn’t perfect. One time, years ago, I played the organ prelude at an evening service and afterwards someone told me how much they had enjoyed it. I said something like “Thanks, but I was really nervous and slipped up twice on the pedalwork. I’ll have to practice that passage more.” The person said, “Well, I thought it was pretty good.” What had I really said to him? “You don’t know enough to know if it was good or not!” I spoiled his enjoyment of it. So just receive the praise gratefully and enjoy the satisfaction of having done something that someone else appreciated.

In response to praise for your sermons, ministry accomplishments and so forth, remember that:

Receive praise with a simple “Thank you” that acknowledges the person complimenting you. Accept it as feedback and share credit with God and anyone else who had a hand in your success, as appropriate.

“I can do all things through Him who strengthens me.”
Phil 4:13