Sharing the spotlight: Leaders and their executive teams

While in Milan for a board meeting,1 I took a tour of the city that included a visit to the refectory of the Dominican monastery of Santa Maria delle Grazio. This is where da Vinci painted “The Last Supper“ on one of the end walls (painted between 1494 and 1498). On the opposite wall, another master painter (Giovanni Donato da Montorfano) painted “The Crucifixion“ in 1495. Both are huge paintings, each taking up the full wall. A doorway was later added to the dining hall and part of The Last Supper was lost (just below Jesus’ place at the table).

Here are the two paintings: 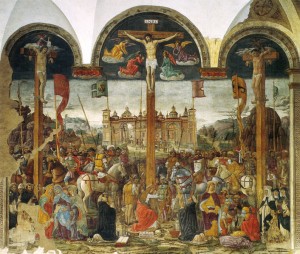 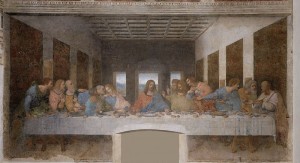 Da Montorfano painted a true fresco, which means he painted on wet plaster. This technique has its limitations:

Da Vinci tried a new technique – painting on dry plaster. This had the advantages that:

In addition, da Vinci used perspective in his painting, giving it a quasi 3-dimensional look. From halfway back in the dining hall, it looks like the dining hall carries on in the painting and that Jesus and the disciples are at the dining hall’s head table. The monks must have got quite a kick out of that!

But my main thought, in comparing the two paintings was to feel sorry for da Montorfano because he had the misfortune that his masterpiece, being permanently opposite to da Vinci’s masterpiece, would forever be compared unfavourably to it. I can imagine him looking over his shoulder as he was painting to see what da Vinci was doing!

And yet, if his painting could be moved anywhere else, it would be appreciated as the masterpiece it truly is.

It made me think about senior leaders and their executive teams. Senior leaders usually get the credit (and the blame) for organizational results. They also have a ceremonial or figurehead function to fulfill. Often they are looked to as the model for what the organization stands for and aspires to be. They are, in short, in the spotlight. But must they keep the spotlight to themselves? Not if they know what they are doing.

Good senior leaders will make sure they include others in the spotlight of attention. They can do this because:

Organizations with active founders or strong personalities in leadership can find it hard to include others in the spotlight, even when the leader is willing to share the spotlight, because the public often wants to see or hear the person they identify the organization with. This is why senior leaders should encourage members of their executive teams (actually anyone within the organization) to have their own speaking engagements, give interviews, and publish articles. Let them build up a following because it all benefits the organization by raising its visibility and expanding the channels of influence for the sake of its mission.

In what ways do you encourage your executive team and other staff to have visibility inside and outside the ministry?