Strangers in a strange land

Metaphorically, the church is now like Israel in exile, living in a foreign land with a host culture radically different from our own. If we want to get along as well as possible in this new situation, we need to take a look at ourselves from their perspective. Are we doing anything that is unnecessarily getting in our way? If so, we need to fix it right now because we are feeling intense pressure from people in positions of power and influence. We find ourselves in an adversarial position that we don’t want to be in. What can we learn that might help us create a better environment in which to engage the dominant culture rather than fight it?

When the majority look at us, at first glance, we’re just people like anyone else and not worthy of much note. No one minds that we huddle in our churches to worship God because that doesn’t affect their lives. But if they scrutinize us more closely, the majority will see differences they probably think are, well – I’ll have to say, just plain weird. From their perspective, there would be concerns about this strange group of people called Christians, especially the ones who call themselves evangelicals or even worse (from their perspective), charismatics. Here’s what I hear them saying as they look at us.

They suck the fun out of life

Someone asked me why Christians are such prudes. Why are there so many things that Christians frown upon? People ask, “Why are you such killjoys and why do you care what I choose to do?”

Sure enough, if they were to live the way Christians aspire to live, there are things they currently enjoy that they would no longer be doing.

But the deeper issues related to fun are:

When asked why we are such prudes or killjoys, we must be sure that we speak in terms of principles and values first. Some of these, they might understand and even agree with. Only then should we discuss specific behaviours in that context.

They want to restrict my freedom

One person assumed that if we could, evangelicals would create a theocracy, a form of government that formally has a god as its leader, and the human leader is the interpreter of that god’s will. If such a god is claimed to be the actual ruler, then where is there room for any dissent? Given the state of the world today, which is suffering terribly from a particular theocracy, creating a theocracy in Canada is indeed a scary thought!

I was surprised that anyone would think evangelicals want a theocracy. But you can see why someone might think this when you consider our fight to preserve laws that did, in fact, restrict some freedoms which now exist. To the extent that we resort to political means or use the courts to create what we think a godly society should look like, we are reinforcing this perception of going backwards to a less liberal and progressive time. I’ll be writing more about this topic in a later post.

Christians are actively engaged in lobbying for a more fair and just society, suggesting many policies, laws and regulations that secular social activists would likely support. For example, a Christian ministry that provides low-income housing is challenging a municipality that charges the same school board development fee on a mansion as it does on a small housing unit, placing a disproportionate share of the development cost on low-income housing. But efforts like these are not usually headline news.

The result is that generally the public only sees what Christians are against, and they don’t understand why we are against it. They don’t see what we are for. If they knew what we are for, they might even be willing to support some of our initiatives. So don’t just critique, propose something positive.

A person assumed I thought I was sinless because I am a Christian, so when I said I regard myself as a sinner he was surprised. He said it took a bit of the sting out of him being judged a sinner by Christians. But I have to admit I’m not perfect. I make no claims that way because I know myself too well. Do I perfectly reflect the mind and attitudes of Christ? Not yet, but having dedicated my life to God, I am working hard to overcome my shortfalls.

Most non-Christians have the idea that Christians regard themselves as perfect, and when they see our failings they call us hypocrites. In fact, what they are seeing are imperfect people who acknowledge their shortfall from Christ-likeness.

If a ‘holier than thou‘ attitude exists in you or your church, that only aggravates the problem of how we can engage society.

And then there are some Christians who may have a saving faith, but they seem to lack any transformation because of it. Their faith seems powerless because they are still just like everyone else. Why would anyone be interested in a faith that doesn’t have any power to change people?

If you are not seeing people’s lives transformed through your ministry, something isn’t being done or isn’t effective. Do something about it.

They seem to be crazy

To secular people, it seems completely irrational to believe in an invisible God for whom there is no objective way of proving his presence. There is even less reason for people to believe in miracles, given the scientific understanding we have today that attempts to provide natural explanations about what people who report miracles have actually seen or experienced. And what is it anyway about this 2,000 year old book that causes so many people to treat it as if it were still relevant to our society today? The larger public is mystified.

Their conclusion is that anyone who still believes in God and the possibility of miracles in this day and age must be intellectually lazy or even crazy. And who wants such people in positions of authority or influence? Who wants to join such a group? Evangelism is more difficult when people’s defenses are already up because they think you are strange, illogical, unstable, and emotionally driven.

Faith will always be hard for secular people to understand, so you need to go out of your way to come across as a reasonable, intelligent, intellectually thoughtful person. Don’t be simplistic – understand the nuances of whatever issue you are talking about.

Some are even delusional

And then there’s the charismatic element of Christianity. When we say that we hear God speak, or say “God told me…”, they get really concerned because, in their understanding of the world, only deluded people hear voices out of nowhere. There are many ways that Christians discern God’s will, but the way we express it is usually in terms of “God spoke to me…” which we know is shorthand for any number of different discernment processes, but which to secular people likely causes misunderstandings. When speaking with a secular person, if I feel it is important to witness about God’s leadership, I have talked about being “led by God to…”, “feeling strongly that God wants me to…” or “God planted the thought in my mind that….”

“God told me so” is not a compelling argument to a non-Christian. In fact, saying this is the quickest way to be written off. You can more easily promote your position or course of action based on what you are trying to accomplish. It doesn’t really matter to a non-believer how you got the idea, it just matters what your goal is. 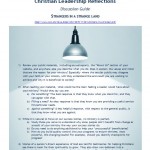 Putting all these concerns together, it is understandable that Christians could be seen as both somewhat bizarre and something of a threat to the autonomy and fun enjoyed by the majority.

The main takeaway from this post is that when people scorn or scoff at our faith, we should cut them some slack. Their concerns about us are likely sincere, given what they know of us. Also, we have a history that forms part of our reputation, and the reputation that precedes you is not always a helpful one.

Our response should not be to retreat or attack, but to engage with them and help them better understand who we are. And of course, we can do the same in reverse and gain a better understanding of them. I’ll write later about how we can create a more favourable reputation. In the meantime, you have great influence over what the public thinks of Christian charities because you have great stories of healing and redemption, of love and care, that touch common needs and aspirations prevalent throughout humanity. Tell them well.

Key Point: Our behaviours and language may seem quite strange to secular people, so we should be wise about how we present ourselves and explain what we are about

Update: John Stackhouse has quite a good article in the Nov/Dec 2015 issue of Faith Today about this topic.

Where is the Church?