There are certain places where you are far more aware than usual that you are a link in the chain of generations that span from ancient history to today. Boston is one of those places. You can’t go anywhere, it seems, without being aware of the many generations who have gone before. Everywhere you look there are plaques mounted on walls telling about someone from at least a hundred years ago and what they did that mattered. That’s cause to pause for thought.  Here are some of my immediate, off-the-cuff reflections.

This week I walked to Harvard Yard, which is, I believe, the oldest part of Harvard University.   Mounted to the wall beside the main gate was an interesting plaque. 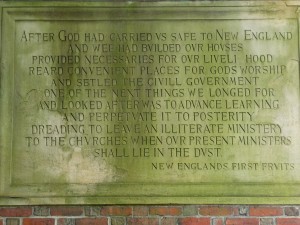 I’ve tidied it up a bit to put it into more modern English, but here is what it says:

After God had carried us safe to New England and we had built our houses, provided necessities for our livelihood, built convenient places for God’s worship and established the civil government, one of the next things we longed for and looked after was to advance learning and perpetuate it to posterity, dreading to leave an illiterate ministry to the churches when our present ministers shall lie in the dust.

Let me just say that the motivation for founding Harvard surprised me – to provide good quality pastors for the churches. How many people attending Harvard are even aware of its founding for religious purposes? Or of the faith of its founders? Sometimes we accept the gifts of the past without acknowledging or appreciating the intent and motivation of the donors. And, I wonder, would we be a more civil society today if we had the same generosity toward the future generations as the settlers of Canada and the United States had for us?

I went from Harvard into Boston and attended the worship service at The Old North Church, which is where Paul Revere had the lantern(s) hung (one or two? I don’t remember which signal was which!). 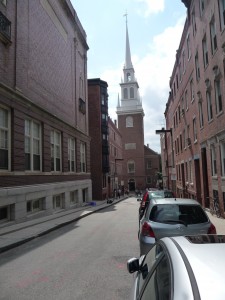 Inside the church, another plaque commemorated Charles Wesley, who in September and October of 1736 preached in the very pulpit that was used in today’s service. You might not be able to read all the lines, so here’s one that I really like. Remember that it was Charles who wrote so many great hymns of the church (his best known is probably the one named on this plaque – O For A Thousand Tongues To Sing). My favourite line reads: Sweet singer of evangelical Anglicanism and poet of jubilant Methodism. 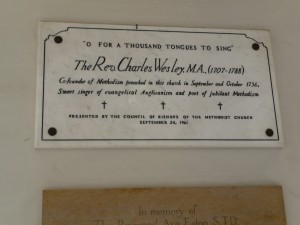 Here’s a picture of the sanctuary with the raised pulpit on the left. 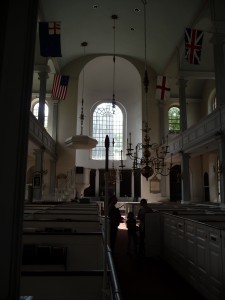 I wondered how the vicar’s sermon today would compare to one of the sermons that Charles gave.  In today’s sermon, the vicar sowed lots of doubt among her congregation. She told us that Paul did not write Ephesians, that the New Testament books evolved through various iterations, and that the parishioners should compare what’s in the book of Ephesians to what the Episcopalian hierarchy chose to put in the lectionary readings, hinting darkly that certain things were being suppressed by the very church that she represented. I somehow just can’t imagine Charles Wesley using the same pulpit to cast doubts among his parishioners about the church he represented and the book he was preaching from.

One final plaque. This was also in the Old North Church. 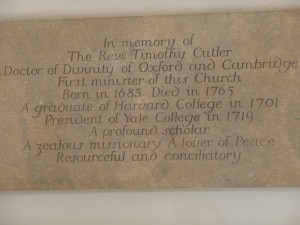 I love the last three lines: A profound scholar.  A zealous missionary.  A lover of Peace.  Resourceful and conciliatory. What a way to be remembered 244 years after your death! I only wish something equally nice could be said about me. Hmm, the good news is that, the Lord willing, I still have time to create my legacy. And so do you.

Thoughts on Living with history