“We followed Jesus, and he led us to you”

These beautiful words are the opening words on a plaque by the entrance to AG Church School in Kolkata. 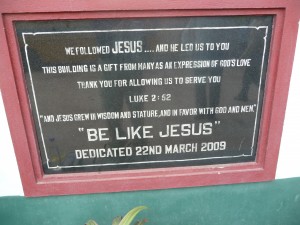 As I was driven to the school, the streets became alleyways that soon twisted and turned through a pretty depressing part of the city. 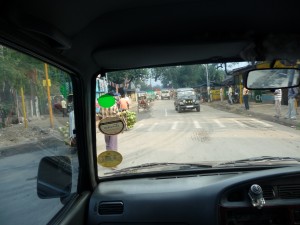 The streets were narrow… 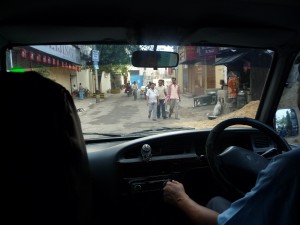 This area is poverty-stricken and it is quite emotionally moving to see it first-hand. You realize that this is their life each and every day, and it is likely a picture of every day that remains in their lives, unless something happens. Perhaps, say, a miracle.

As we drove, I saw children converging into our alley, pouring in from all the side alleys and streets. They were dressed in a smart school uniform of dark blue pants/skirts and light blue shirts. Each child had a good haircut, and there were plenty of different hairstyles in evidence. These children were all clean, neat and tidy, in a stunning contrast to the drab grayness of rags, dirt and dullness that surrounded them. As they walk through the alleyway each day, the school kids are truly a beacon of hope to a community that has no hope. Someone is taking good care of these kids! And someone has a vision for how to change their lives.

I couldn’t help but contrast the love and care that these children are experiencing with the crass commercialization of babies that I saw in both Bangkok and Kolkata. Missionaries who have lived in these cities for some time told me that mothers rent their babies by the hour to women who pose as mothers and grandmothers. They drug the babies into a stupor and then go begging on the streets. The missionaries say most beggars are controlled by the local ‘mafia’ and they see very little of what they raise. The baby, of course, sees nothing at all. These babies just lie limpid in the arms of their exploiters. My Indian guide at Agra said that babies there are rented for about 40 rupees per hour.

The children coming to AG Church School live on the edges of the Kolkata garbage dump. They are the poorest of the poor. And they have been given a chance to change their future due to the love of many Christians who will probably never meet them. The AG Church in Kolkata (Assemblies of God) has a vision for them, and they run the school. The Pentecostal Assemblies of Canada has a vision for them too. And they are funding programs at the school and other programs being developed that will operate from the school property.

But who had the vision for buying the property and building the school itself? Who indeed!

The project to buy the property (an old tannery) and convert it to a school cost $3 million. That was just to get the elementary school going. It will cost a lot more than that to finish the school, and other funders are needed for that. You would think that the ministry that raised the money and the major donors would be listed on the dedication plaque by the front door, but you would look there in vain. No one is mentioned at all. The couple who raised the money wrote what is on the plaque, and insisted that they not be mentioned on it.

I’m told it is no secret who raised the money. It was a very public appeal, and this couple was front and centre of the fundraising effort. So the who is public knowledge. But to take no credit for it! What a great spirit of service! It reminded me of Child Evangelism Fellowship Ontario, an organization that runs summer camps under a local church’s name rather than their own. Athletes In Action does the same with at least some of their soccer camps. This is the true spirit of Christian service. It is not about working for credit, but working to advance the mission of the church.

I’ve wrestled with whether or not to reveal who this couple is. They don’t want the congratulations or credit for raising the money. They want the focus to be on the kids and the goodness of God who provided for them. But I think that when ministry leaders do something well, there is no harm in pointing it out. After all, when things go badly, that will be pointed out. Fair’s fair.

So I give a public thank you to Reynold and Kathy Mainse who had the vision to invest in this property and who worked hard to raise the funds for it. They gave control of the property to AG Church with the only provision being that it always be used for charitable purposes either by the church or by whoever they sell it to later on. (That’s good – a textbook implementation of Canada Revenue Agency’s policy for foreign capital projects!) The Mainses have no say or involvement in what happens to the school. Their work is done, although I’m told that either Crossroads or 100 Huntley Street continues to provide some operational funding.

What are the results of this school’s three years of operation? Plenty. The kids are encouraged to dream about what they want to be when they grow up. They are learning too. But there is a huge multiplier factor at work here. The parents of these children have seen what their children can be. I’m told the parents are very proud of their kids and the futures that have opened up for them. They are taking very good care of their children and doing everything they can to support the school’s work at home.

This has caused a ripple effect throughout the garbage dump community, as people for the first time in their lives start to take care of themselves, as they start to have hope that life will not always be the same, and as these Hindus realize that fate does not rule their lives. The Christian teaching that these children receive at school goes back home with them, and people start hearing about a God who cares about their plight, who has heard their complaints, and who loves them so much that he is bringing a miracle of change into their lives through his followers, people like those who responded to the Maines’s appeals, the Christians of AG Church who support the work of the school, the PAOC members across Canada who continue to send money, and many more beyond. Each one followed God, and God led them to these children.

This is something for all ministry leaders to think about. The senior-most leader of a ministry often receives most of the public accolades because, for many people, they personify the ministry. While such affirmations are great encouragements, it is unhealthy to feed off them, to need them and crave for more of them. Deliberately taking a back seat, either personally or as a ministry, is a healthy way to keep humble in spirit and realize that you and your ministry are just one part of the comprehensive work of the people of God. Remember, even if there were no public affirmation, your motivation and encouragement to continue ultimately comes from knowing you are doing the work of God as he called you to do it.

Such dedication by many people to the mission of God resulted in seeds being planted that will change the future of each child attending this school, probably their families as well, and maybe even the entire community that lives by the garbage dump.

A miracle is at hand!

See, I am doing a new thing!
Now it springs up; do you not perceive it?
I am making a way in the wilderness
and streams in the wasteland.
Isaiah 43:19