Karibu! That’s Swahili for ‘welcome!’ and I heard it hundreds of times in my short stay in Kenya. People are very friendly here, but I must admit virtually everyone I met is associated one way or the other with the tourist industry, so they are well-trained to make people feel welcome, but even so, it’s nice to be so well welcomed!

I’ve already written about the hotel. Saturday and Sunday were two great days of rest. Saturday morning I booked a driver who took me out to the Nairobi National Park, which is right on the edge of Nairobi. We spent three wonderful hours driving through its intricate road system and saw all the types of animals in the park except for the lions, which are sleeping in the morning. 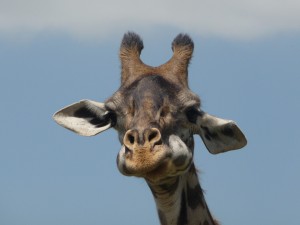 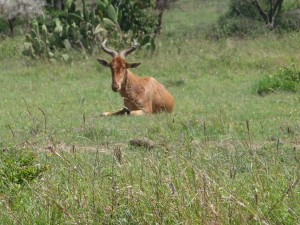 A gazelle or some such animal 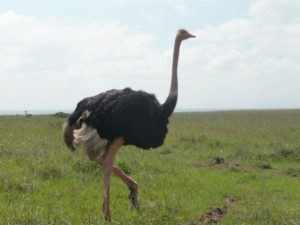 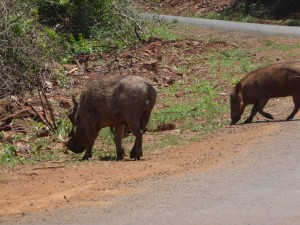 I thought a road sign was so funny that I took a picture of it. The sign said “Warthogs and children have the right-of-way.” 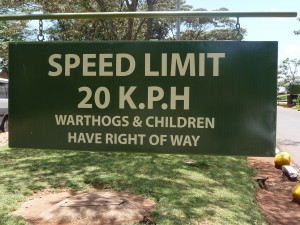 The closest church to the hotel is the Nairobi Pentecostal Church, a mere ten minute walk away. So off I went for the second of three morning services. All are in English. Sitting outside waiting for the first service to finish, I made a new friend with a young man, Nathan. He has an older brother and sister living in the United States, and he is headed that way too, if he can. He was a delightful companion to sit with during the service, and made sure I found my way around okay. 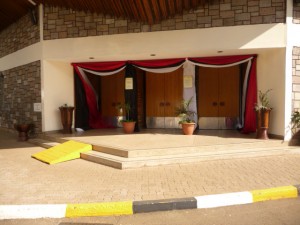 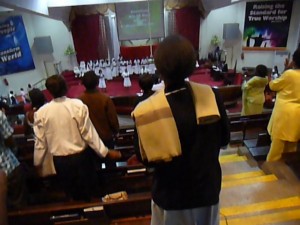 The church is very large. I sat in the balcony and it could easily hold two of my own church in the balcony alone, perhaps two-and-a-half. The downstairs is larger yet. I think my church holds about 900, so this church must seat about 4,000 people. The first service and the second service were both packed out. When I left the building, the third service had already started and it was reasonably full.  A lot of people attend here.

The church was founded in 1959 by a Canadian and the property and building were paid for by the Pentecostal Assemblies of Canada. This church now has seven daughter churches, four schools and a radio station operating successfully. The name of the whole ministry is Christ Is The Answer Ministries.

The pastor launched a new ministry today called The Governance and Advocacy Ministry, designed to support Christians working as public officers (civil service, parastatals – whatever they are, uniformed forces and the judiciary) and current and aspiring politicians. The idea is to provide moral and prayer support for those who are in a position to influence society. Back in February, I was in Ottawa and had breakfast with one Christian Member of Parliament, and then had lunch with another. Both MPs told me the same thing: while there are lots of Christian MPs in several parties, they feel very isolated from Christians in general, who often don’t appreciate the complexities of working in a legislative environment and who expect too much that is unrealistic. Both said they would enjoy having greater support from the Christian community. Neither was talking about votes, but about dialogue, trust and prayer support. So this new ministry in Nairobi sounds like a good idea.

I made a mistake at the visitor welcome centre after the service.  We had been directed to a small room to get some information about the church and to meet each other.  After telling everyone across Canada in our Short Term Missions regional seminar not to give anyone your contact info, a person who was on the edge of a small group I was talking with asked for my name and I gave it. He had already heard me talking with the only other white person in the service that morning, a World Vision employee from the States, and during that conversation I told him I was staying at the Fairview Hotel.

So guess what? After lunch, while Skyping with my family, I got a call from the front desk. This guy wanted to see me! I told him he’d have to wait while I finished my call. Setting aside the immediate circumstances, I thought for a moment about my approach to the matter in principle. I’ve learned that, unless you know the person personally, you never give money to a person, only to a ministry who can vet the needy to be sure their need is valid. I called the front desk to explain that he was not an invited person and that I was coming to the lobby to try to get rid of him nicely.

By the time I got there, they had a number of the staff standing close at hand and ready to usher him out if it got ugly. He wanted to sit down and talk, but I wasn’t moving from the reception area (since that would only make it more difficult to end the conversation). So we stood, I asked him directly what he wanted, he played the ‘brother-in-Christ’ card and then asked for money or a job. I explained that I didn’t know him or his circumstances, that the church was the appropriate place to go, and that I don’t give direct aid anyway. He had a hard time accepting that, but I told him his own church, where he is known, was the place to go. He saw the uniformed men standing nearby watching, and finally said okay. I wished him well, and that was that. You may have handled the situation differently, and if so, what would you have done?

Otherwise I had a great afternoon writing several posts and listening to Wagner. Oh, the Prelude to Act I of Lohengrin is among the most emotional, soaring, deeply moving pieces of music ever written.  It lifts my spirit!

During the last elections there was a lot of violence and about 1,000 people died. A commission has since investigated and named six senior government officials as the prime instigators of the violence. Things seem to be coming to a head in terms of calling them to justice. Three of the six returned to Kenya on Sunday, and another two were arriving on my last day in Kenya, Monday. A rally was going to take place in Uruhu Park, which is just a few minutes walk from my hotel, in support of the two people returning, and a competing group was expected to show up to protest the rally. People were a little unsure what to expect when the two returnees spoke to the crowds. The upshot for me was that it was felt best that my Monday morning meeting with Samaritan’s Purse take place at the hotel, rather than their offices, so I wouldn’t be travelling the streets.

I enjoyed meeting the Country Director for Samaritan’s Purse, Alex Kuria. He has quite an interesting story of how he ended up in his current role and he gave me a lot of insight into the current environment in Kenya for Christian ministry. What I found most interesting was the transition that has taken place in Samaritan’s Purse over the last thirty or more years. It started out in Kenya primarily as a funding ministry that supported the good work being done by other ministries. Over the years, it has evolved into a dynamic ministry doing its own programs. A lot of growth has taken place in the past few years. In August 2005, Samaritan’s Purse had only 2 project staff members.  By November 2008, it had 100 project staff.  That number will fluctuate as projects end or are added. The projects are wide-ranging, from maternal health to livestock, household water to HIV/AIDS prevention programs. My overall impression was of a ministry committed to community development rather than specific projects. The projects come and go as opportunities arise, but the mission remains constant (a healthy way to manage an organization).

The trip to the airport was uneventful. Police and army troops were patrolling the streets, but not in an oppressive way. My flight to Kigali, Rwanda was via Bujumbura, Berundi. This is a beautiful country of rolling hills and deep valleys. As I flew over Berundi, my thought was that this is just like The Land That Time Forgot or some such story. This could be the setting, I imagined, for a movie set in ‘deepest, darkest Africa.’ The perfect setting. And then I remembered, “Duh, this is Africa!” And Berundi considers itself the heart of Africa, the very centre of Africa. 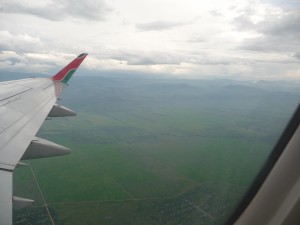 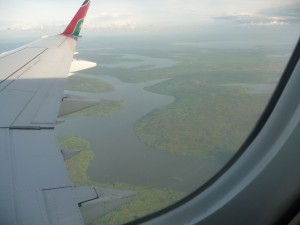 On the short flight from Bujumbura to Kigali I was fortunate to have a Berundian sitting beside me, who told me about the history and culture of Berundi and Rwanda (which used to be one country and which still share much in common). I am enjoying Africa!