As the plane landed in Kolkata at 12:40 am Sunday morning, an Indian man two rows in front of me immediately made a phone call and then shouted out something I didn’t understand. The whole plane, mainly packed with Indians, erupted in wild celebration. When I was picked up at the airport, my Indian host told me that India had just won the World Cup of Cricket. As we drove into Kolkata at 1:30 am, crowds were still on the streets blocking traffic on the main route from the airport as they partied and set off fireworks. The triumphant headline the next day was The World Is At Our Feet!

I stayed with Pastor Ivan and Sheila Satyavrata, who were most hospitable. Pastor Ivan is the senior pastor of the AG Church of Kolkata. This is the largest pentecostal church, and perhaps Protestant church, in north India. 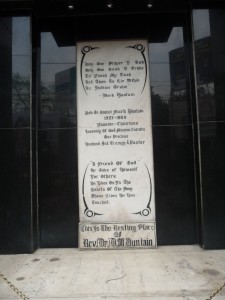 Memorial for the church’s founder

The church campus is quite large. It includes the church itself, the hospital, 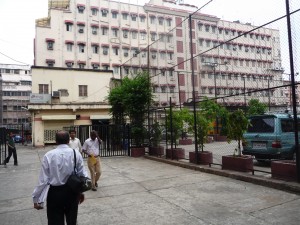 an educational facility for post-secondary education (particularly seminary and teachers’ college), and at the front of the property there is a seven storey building. The church offices are at the top, and the rest is rented out to commercial tenants. The church feeds 11,000 people every day, and just look at the size of the pots in the kitchen! 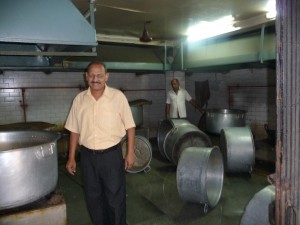 On Sunday I attended the 2nd English language service and spoke for about five minutes bringing them a greeting and some encouragement. A pastor Mark visiting from Florida gave the sermon, and did a wonderful job preaching the holistic mission of God.

I started taking anti-malarial pills two days before arriving in India, and was already experiencing some cramps that morning. Pastor Mark was taking the once-a-week kind while I was taking the daily Malarone pill. Pastor Mark was so ill that Pastor Ivan wasn’t sure who would be preaching. Mark had gone to rest before the sermon in a side room, but he did make it out to preach, but then had to leave immediately after preaching because he could hardly breathe. I had to leave almost the same time because I thought I was going to keel over from a variety of new and continuing ailments. It seemed that both of us were suffering from side effects. We were sent next door to the hospital for EKGs to be sure the pills had not done any heart damage (which can happen and you should immediately get off the pills at the first sign of any heart trouble!). Fortunately the results were clear. Mark seemed fine when I saw him the next day while I was much improved but continued to suffer the stomach issues until Wednesday night. 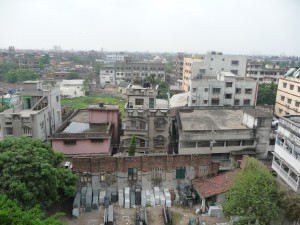 A view of Kolkata 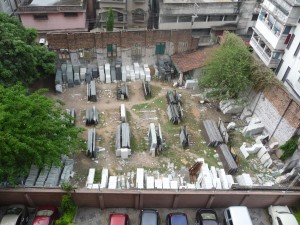 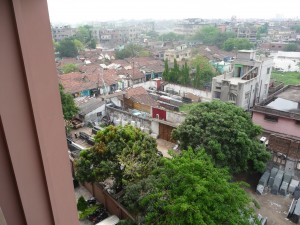 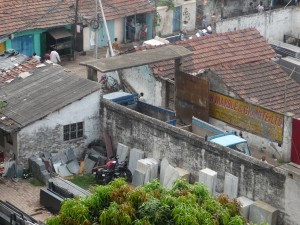 Kolkata in the morning 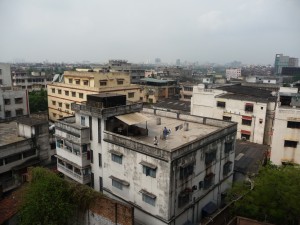 Later on Sunday I met a number of long term missionaries (mostly AG due to the denominational affiliation of the church). I really enjoyed hearing their stories and how God called them to India.

On Monday, I had breakfast with PAOC missionaries Stewart and Monique Shaw, who live in the AG Church School building. As I talked about my daughter in Bangkok, they put two and two together and asked, “Is your daughter Jessica?” When I said yes, they told me she is an amazing girl. I said, “Yes, I know that already!” NO I DIDN’T. But I could have.

Next I visited the AG Church School, which I already wrote about here. Crossroads and the PAOC are the two biggest supporters of the school, and their money is being well spent, as you’ll see if you follow the link just above.

After the school, I went to the church offices and met with Pastor Ivan and his senior leadership team.

I then visited The Leprosy Mission Hospital in Kolkata, the Premandandra Hospital. 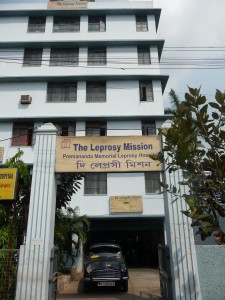 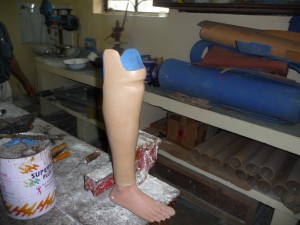 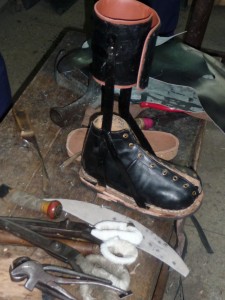 Dr. Helen Roberts, an ophthamologist, gave me the introductory talk and then someone else took me through the hospital. I must admit I felt like a voyeur the whole time and was highly aware of the almost sacredness of the moment. I was acutely sensitive to how I would feel if I were in the hospital for major treatment, perhaps even amputation, and a stranger came in to see my problem. “This is my foot that is damaged beyond repair, and I am not suffering for your entertainment or interest” is what I’d be thinking. But as I looked every patient in the eye, as a fellow human being, and tried to convey what compassion I could without becoming melodramatic or anything, each patient gave me the hands together bow of respect. In Thailand, Jessica says this is called the “Wai” (pronounced ‘Y’), which is also a verb. I thought when they recognized me with a wai, doing so gave them dignity as a person, and I could reciprocate by “wai-ing” them in return.

Diabetics have the same problems as those with leprosy. In both cases, nerve damage leads to loss of sensation and therefore loss of awareness as to when you are hurting or damaging your body. So the hospital deals with both. They have a program for holistic care that leads if possible to reintegration into a community as an independent person.

Next came the evening flight from Kolkata to Delhi.

The following morning I met with Dr. Richard Howell, General Secretary of the Asia Evangelical Alliance and of the Evangelical Alliance India, at his home. I had lunch with about 20 pastors from all over India who had come to Delhi for a prayer conference to support evangelism in India.

After lunch, it was just down the street a bit to The Leprosy Mission’s national office. This is an interesting ministry because it was birthed in India and later set up overseas funding ministries. It often seems someone outside of the country sees the need, goes home and creates the fundraising arm, and then starts the overseas charity to do the work. This is the opposite case. 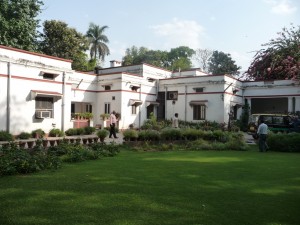 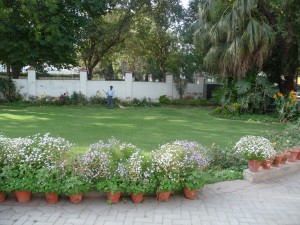 Wednesday was my tour day for India. I arranged a one-day excursion to Agra to see the Taj Mahal through a tour company that did a great job. They picked me up at my hotel at 5am and took me to the train. The guide stayed with me right until I boarded my car, and told me where to meet my guide in Agra. The one thing I forgot to ask was, how many stops to Agra? The stations aren’t well marked, but if you look sharply for a sign, there is at least one. Stations are not called out, so you must keep watch yourself. Do not travel anything less than first class. Believe me, I saw how full the other cars were. Aisles were full and people were literally hanging on at the exit doors. 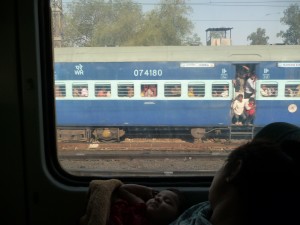 The guide in Agra knew which car I was on, so when the door opened he was right there. He took me to another location nearby and switched with Gourav, who spoke excellent English and who was my tour guide for the rest of the day. At the end of the day, the travel process repeated in reverse order until I was dropped off at my hotel at 11pm. The surprise for me was that it was not a group tour, but a private tour. 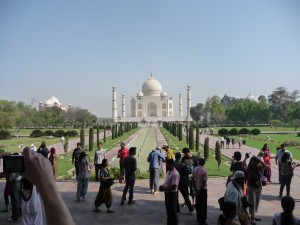 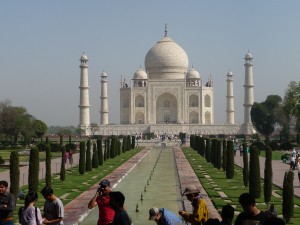 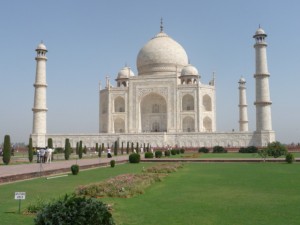 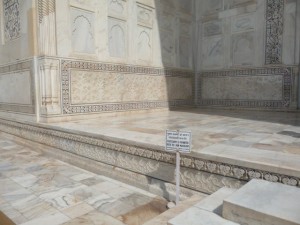 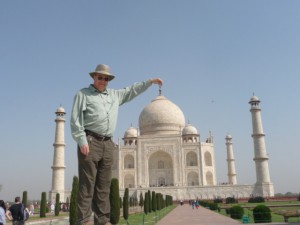 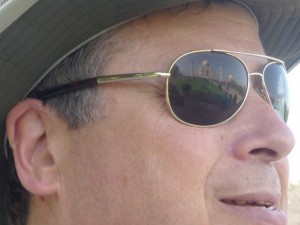 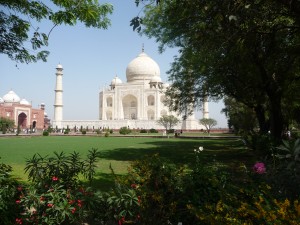 The forecourt and inner gate to the Taj Mahal 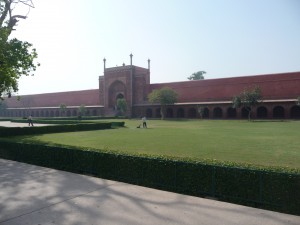 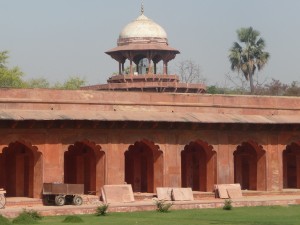 The forecourt of the Taj Mahal 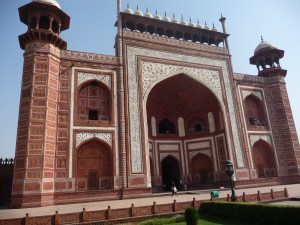 The inner entry gate to the Taj Mahal

Here are my impressions from the day:

Some general observations about India:

I left India Thursday morning to head to Kenya by way of London. Don’t ask why London, I just had to work within the rules of my round-the-world ticket. It added a day of travel, that’s all. So, it’s time to say “Good-bye Asia!”

Thoughts on Celebrations in India