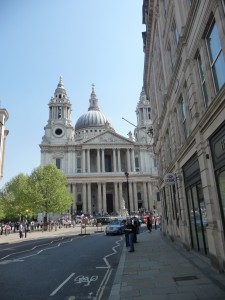 Bright and early, I was on my way back to St. Paul’s. I wanted to celebrate Easter at a place that has had continuous church services on the site since 604 AD (to be clear, that is 604, not 1604). I imagined thousands of people attending, and I wanted to get in. They had already had two services by the time I got there at 9:15 (starting at sunrise and at 8:00).

I sat front row, fourth from centre (I wanted a good view of both organ consoles). When the service started, I estimate only three or four hundred were present, all sitting beneath the dome, where I was. But midway through the service I looked back, and the nave was completely full. Based on dress, cameras and tour guide books, about 95% of the congregation appeared to be tourists.

I was expecting a celebratory service with some impressive music, but for the most part the service was rather restrained. The choral music at St. Paul’s today was entirely modern and dischordant. Not attractive at all to me. It seems modern composers mostly want to shock rather than please their audiences. (I’ve observed this since studying church music years ago at university.) You really have to work hard to listen to it. The service was matins (or mattins in English spelling), and it was heavily theological in orientation. The service and the homily by the Dean of the cathedral gave a very clear Gospel message of salvation through Christ alone, but in a heady, sombre manner.

Almost all of the organ music I heard today was well known to me, and I have played most of the pieces over the years, so this was a special joy to me to hear it today for the first time in a cathedral setting. The preservice music was the Prelude and Fugue in C by Buxtehude. Since this music was not listed in the calendar, I didn’t know what would be played until it started. My heart leapt for joy after the distinctive first two notes of the pedal solo that opens the piece. The service may have been restrained, but not the organ music.

None of the great Easter hymns were sung at this service. The hymns were about Easter, but not the joyful ones. Again, great biblical truths were conveyed in them, but I wanted to sing for joy!

The organist closed with Litanies by Jehan Alain, a French composer who died way too young at 29 as a French resistance fighter in WWII. I love this piece (even though it ends on the biggest dischord you will ever hear, at full organ no less!). I wanted to hear the organ’s trompette en chamade, which is mounted high over the west doors. I was not disappointed. This blazing trumpet stop opens and closes Litanies and I was surprised the dead in the crypt below us did not rise up and join us in the service. This is one trumpet call that is impossible to miss and it probably exceeds the maximum allowable decibels, but what a sound! I wished my dad was with me to hear this. However, notwithstanding how much I like Litanies, I thought it was a very strange piece to end an Easter service on, because it is about someone in agony praying to God fervently, praying louder and louder to get God’s attention and ending with dischord as the person fails to perceive God’s answer. Surely the resurrected Christ is God’s ultimate answer to all prayer! So the service ended, and I waited for the next one while still wondering about the choice of Litanies.

The next service was at 11:30, and there was a pretty complete turnover in the congregation. This was the Sung Eucharist, and now I understood the logic of the services at St. Paul’s. I was about to attend the fourth service of the day, and unlike my church, where multiple morning services are essentially the same, each service in the Anglican tradition has it’s own purpose. No two are alike. The service I had just attended was indeed heavily theological. It was explaining the significance of Easter. The one I was about to take part in is the response to that truth, and it was celebratory. It opened with a magnificent fanfare played on the trompette en chamade. We sang the joyful Easter hymns that I so wanted to sing. The Bishop of London gave the homily and, once again, it was a crystal clear Gospel message of salvation through Christ alone. But restrained. What all the homilies I heard today were missing was the call to action NOW! They all suggested accepting Christ, but didn’t tell you how or urge you to do it right away. They let the tourists off easy.

But when I had the ‘aha!’ of insight about the services, I realized Litanies was in fact a reasonable choice, showing the desperation we have waiting for God’s answer to long-held unanswered prayers, and the next service is the release that comes when we discover God’s magnificent and more than satisfying answer.

The service opened with Bach’s beautiful Toccata and Fugue in F and ended with a lively and triumphant piece, the only one I heard today that was new to me, a choral-improvisation by Tournemire.

All who believe in Christ as their Savior were invited to participate in Communion, while all others were invited to come forward for a blessing. Because of where I was seated, I received the bread from the bishop, and I thought it was great that he personally participated in the distribution. He served the congregation, not just the other clergy.

St. Martin in the Fields

After this service, I buzzed over to the Westminster area by Tube to do some quick sight-seeing. I went to St. Martin in the Fields. 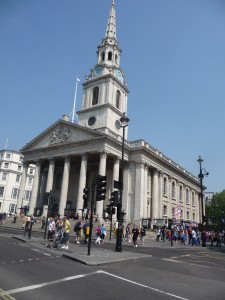 I knew this church best from its many recordings of baroque instrumental music. It is the Cadillac of baroque recording groups. But this church is also where my paternal grandmother’s parents were married. There was a Mandarin service on when I got there, so I’ll have to go back to tour it, but I got a peek inside and quite a shock. It looked like an American colonial church. Painted panelling and so forth. It turns out that when this church was built in 1721 it was a daring new design, and it is the model for all the early American churches of the same design. So what is in my mind a typically American church look, is in fact, English. 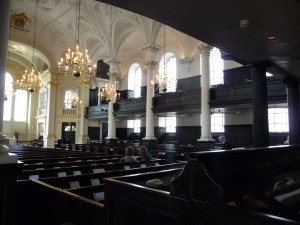 I came back another day to take this photo

I then walked around Trafalgar Square and down Whitehall. 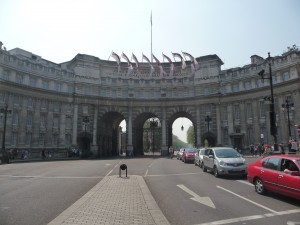 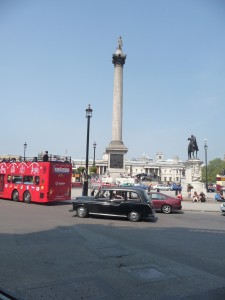 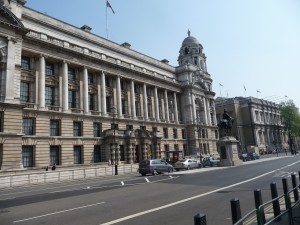 Preparations for the Royal Wedding are underway. MSNBC already has its huge platform ready and the steel gates to keep the crowds off the streets are ready to be installed. Across from Westminster Abbey a large platform with tiered seating is almost finished. 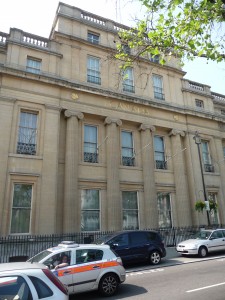 I was very surprised that no Canadian flags at all were in evidence at Canada House. One would have thought… 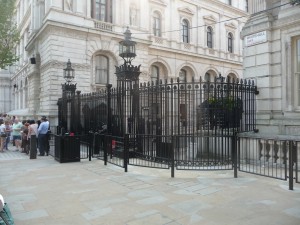 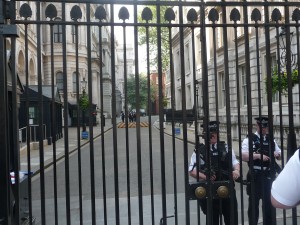 Downing Street is completely closed off with high security in evidence (including police patrolling the street itself with machine guns). Sigh, terrorism has won. In 1972, we walked right down the street and stood opposite to #10. You just couldn’t stand on the sidewalk or street in front of the house. 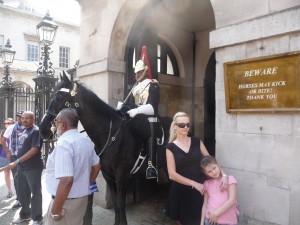 I looked at the Horse Guards parade grounds and thought of my daughter.

I then zipped back to St. Paul’s for the 3:15 Festal Evensong service. I confess, the only reason I went back for a third service was that the postlude was Vierne’s Final from his 1st Organ Symphony. That is just not to be missed!!! I can’t remember now what the prelude was, but it was a show stopper too.

Finally, it was back to Westminster Abbey for their evensong service at 6:30. The gates were closed and there were several hundred tourists wanting in. The clergyman at the gate had the patience of Job as he said again and again, the abbey was closed to the public for a service. I got up to the front, said I was there for evensong and the gate swung open for me. I had a fleeting picture of someday telling an angel, “But my name is in the book!” and having another gate swing open wide for me.

This was not at all the service I thought it would be, with pageantry and procession. I guess that was earlier in the day. I was taken up the side aisle, past the nave, past the choir and right into the space between the transepts and between the choir and the altar. Seats were set up there for a small service. There were about fifty people there, but at the end of the service I could see the transepts were full on both sides, probably about 500 people. But again, there were many tourists. I was a bit ticked off that, when they got tired of the service and realized they weren’t free to walk around, they just got up and left, disturbing the flow of the service.

This service was led by a very, very old nun. A young ordained man did the homily. He looked about 23 years old or so, and yet was already a reverend doctor. I asked him later how old he is, and he is 32. His doctorate is in ecclesiology. Very impressive. Another good but restrained homily. It just needs some oomph.

The music at this service was all that great church music should be. A lady sang Handel’s I Know My Redeemer Liveth from Messiah. We sang more great Easter hymns.

The organist played a Bach Prelude and Fugue before the service, but I don’t recall which one. And he did a wonderful Bach Toccata and Fugue for the postlude, I just can’t remember which key it is in. I can hum it, I just can’t name it. Anyway, it was music for the soul.

The organs of St. Paul’s and Westminster

There is a big difference between the organs at Westminster and St. Paul’s. As they were played today, St. Paul’s has the show organ. It has the big stops, the brilliant voicing and the muscle-power to command attention. The Westminster organ is the more traditional English organ sound, strong on foundations, more subdued voicing and a generally ‘wider’ sound. Both are a pleasure to hear in their different ways.

Well, it was a wonderful day of worship and music. I find God in music, so it really appealed to me. But, when this service was over, I was ready to go back to the hotel. And that is exactly what I did.