Upon leaving South Africa I entered a new phase of my sabbatical. Various board members suggested that about one-third of the sabbatical should be ‘down-time,’ and I thought part of that time should be while I’m overseas. So for the next two weeks or so, I am using my time in the U.K. to fulfill some personal dreams. I left South Africa Friday night at 7:30 and arrived in London Saturday morning at 5:30 (local times). A quick shower and change of clothes and I was off for a day of sightseeing.

What is a Canadian?

After sampling so many different cultures, it felt really nice being in the culture from which my own springs. However, I’ve realized something on this trip. We Canadians often distinguish ourselves in terms of what we are not. So we are not, for example, American. We spell words differently and we have different values and attitudes. So I thought we were more like Britain. But in New Zealand, Australia, India, Kenya, and South Africa, you will find far more linkages to Britain in daily life than you will in Canada. I have never felt so positively American! For example, our terminology is more American than British. When did you last get off a lift and join a queue on the first floor of the building and look out over the street one floor below? In a myriad of ways, our culture and daily life experience have much more in common with the United States than they do with Britain. Nevertheless, my family’s roots are firmly in the U.K. and I’m glad to be here. 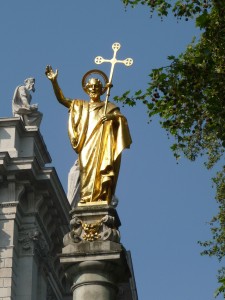 First up was St. Paul’s Cathedral. From 2001 to 2004 they restored all the interior stonework and what a difference it made! One panel, to the left of the Great West Door, was left untouched. It is a dull, drab grey-brown. Positively dreary. But all the other stones! What a difference. They are sparkling white. The whole place looks clean, bright and cheerful. They also cleaned all the paintings. The gold in them sparkles as if painted with jewels. The colours are brilliant and alive. The church is huge, not overly ornate, but extremely impressive in its elegant simplicity. 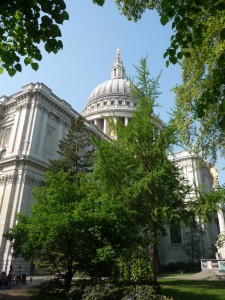 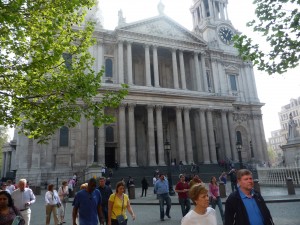 If you are up for it, 550+ steps up circular stone staircases and open iron stairs and catwalks will get you up right to the top of the dome that you see from the outside and a marvelous view of London. (There are two domes, one inside the other. The dome you see inside is not much higher than the walls of the church while the one you see outside soars above the church.) First stop is the Whispering Gallery, which is the base of the dome you see from the inside. The walkway around the dome is not wide, so if you are afraid of heights, cling to the wall. But the view downwards is incredible. From that gallery onwards, you are into tighter spaces and steeper stairs, but there are places where you can pause. The direction of travel is one way only, so once you start up from the gallery, you are committed. You come back down by another stairway. The second level is where the exterior dome meets the walls, and the third is at the top of the dome and the bottom of the spire. When I was last at St. Paul’s (1972), you could go one level higher. Up very steep stairs, and finally one person at a time up a ladder, you could get your head into the gold base just below the orb on which the cross sits. If you look closely at a picture of it, there is a small window on each side. But they don’t allow you up there any more. 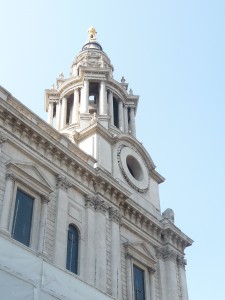 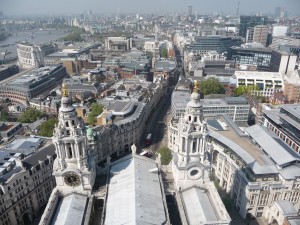 It took me three hours to view the Cathedral top to bottom, but I did not spend too much time reading all the monuments in the crypt. I had a good look around, but if you are really into the monuments, I’d probably add another two hours for that. The biggest surprise of all for me was the Holman Hunt painting, The Light of the World. I clearly remember seeing it on the first or second pillar of the south aisle facing the wall, not the nave, and that it was a small painting, much smaller than I ever imagined it would be. [Someone remembers the original painting was not available for viewing, so a small copy was on display.]

This painting was made into the centrepiece of the stained glass window at the front of the church I grew up in, Timothy Eaton Memorial Church in Toronto, so I looked at it several times every week and loved it. I was so disappointed at how small the original painting was.

I’ve since discovered the identical window at Highfield Baptist Church in Moncton. You can see it in the centre panel of the large window.). Highfield was built within two years of TEMC, so I guess there was a window manufacturer that was mass producing this window.

However, this time there was nothing on the pillar, and a very large painting of The Light of the World is the centrepiece of the chapel in the north transept! I don’t know how to explain this. The picture was so important to me and the difference in scale made such a huge impression on me. Whatever, it is a beautiful depiction of Christ knocking at your heart’s door. 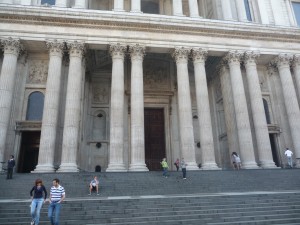 As I left the cathedral walking down the western steps past a few pigeons, I couldn’t help singing Feed the Birds to myself.

I walked up to the Priory Church of St. Bartholomew the Great. 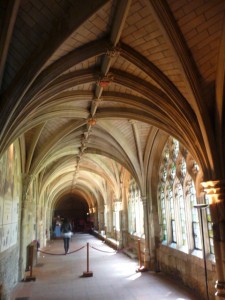 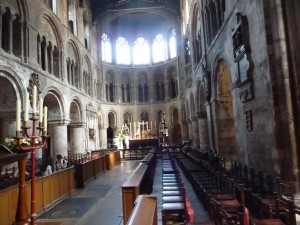 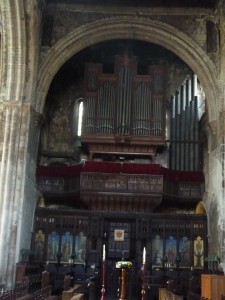 My guidebook had a rough location for it, but I would have missed it if I hadn’t looked down a side street and got a glimpse of a gorgeous stone doorway. This church is priceless. Built in 1123, it is the largest and best remaining example of Romanesque architecture. It is tucked away with its small churchyard behind all the buildings on the surrounding streets and you can only reach it by a lane way or by a very small alley between two buildings. The priory was dissolved in the turbulent religious strife of the sixteenth century and the building became commercial. The chapel once housed a print shop where Benjamin Franklin worked at one time. Long after every other Anglican church refused to let john Wesley preach, this church welcomed him to its pulpit. Today, the building is again a church, and if you have an interest in church architecture, it is a must-see. 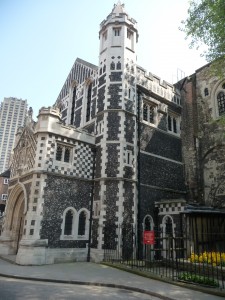 The north transept exterior wall has black and white stones in a checker-board pattern, which greatly surprised me. The only other example of this that I know of is the parish church in Luton (where I will be worshipping in two weeks). The whole building is a checker-board pattern and I thought the pattern was unique to that church. I guess not. There is a nice example of an oriel window overlooking the nave, from which the bishop could keep an eye on what was happening in the sanctuary.

The Tube is surprisingly easy to navigate. I bought a one day pass for all six zones (I was staying near Heathrow), and the pass was only £8, a good deal I thought. However, long sections of five of the Tube lines were closed for maintenance. Apparently this happens all the time, so if you are relying on the Tube, check for closures before you get on the train, so you can plan your alternate route. The closures are different every week. I ended up walking two stations to get to a train that would take me to Tower Hill. 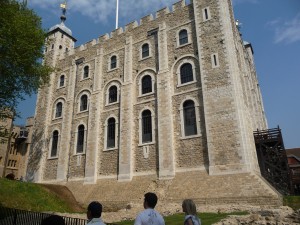 The Tower of London took about two hours to see, as I recall. The only exhibit I did not see was the torture exhibit. I just can’t imagine why anyone would want to see that, and yet the line-up, sorry, the queue, was very lengthy. 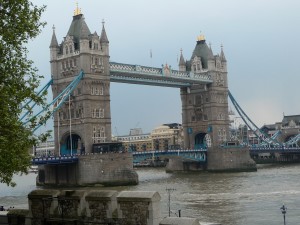 This time I was able to see the Crown Jewels. In 1972 my family did not have enough time. There was a lengthy queue, but it moved very quickly. That’s because once you are in, you can move as fast or slow as you like. So even though the line was long, I was in within fifteen minutes at most. The exhibit is well worth seeing. In the lead up to the jewels themselves, there are multimedia presentations showing the same jewels you will see being used by royalty in the past and present. They have paintings from hundreds of years ago showing monarchs using or wearing the jewels. The jewels themselves are in a huge vault, complete with massive doors. The sign says this is the most secure room in Britain. I find that a bit hard to believe, but it certainly is secure. To see the main items, you stand on a conveyor belt that moves you along the case, but you can go back and do it again if you want to. The jewels belong to the people of Britain, not the monarch, and all the principal jewels are ones that are used for a coronation. Did you know that there are two similar crowns used in a coronation? Although they look virtually the same, one is bigger and heavier than the other. That is the one used inside the Abbey for the crowning. The other one is smaller and lighter, and is the one worn when the monarch leaves the Abbey. The average person wouldn’t notice. 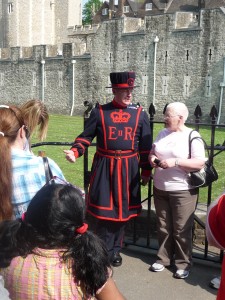 The Yeomen of the Guard (the ‘Beefeaters’), are all retired decorated military men (between 42 and 55 years of age). There is a pretty high hurdle to jump to qualify for this position. They give a very humorous tour!

After the Tower, I headed over to Shakespeare’s The Globe Theatre for a performance of Hamlet. 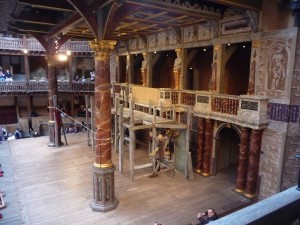 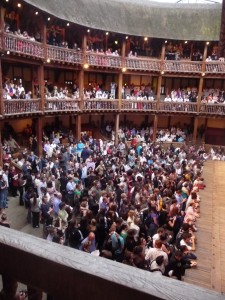 This is an open air theatre, and part of the entertainment are the people in the ground level standing area. They pay only five pounds, but they have to stand, and if it rains, they get wet. It rained. The seats and stage are covered, so I was dry. I only stayed until the end of Act Two however, because I couldn’t keep my eyes open any longer. I left at intermission and headed to my hotel. I was beginning to suffer from the red-eye flight the night before, and I wanted to be fresh for a big Easter day!