“As a member of the leadership team, each person is responsible for fulfilling the following roles… Supporter of the CEO, supporting and advancing the CEO’s agenda both publicly and privately.”
Nadler & Nadler, “Performance on the Executive Team: When to pull the trigger” in Executive Teams.

Throw a stone into calm water and some waves will ripple out radiating in all directions. The CCCC’s logo shows exactly that, the ripples of our work extending outwards and helping Christian ministries be stronger ministries.

When it comes to leadership, though, I have another image that I think is inspiring.  Ripples of water gradually smooth out as they move further away from their origin. Senior leaders, though, do not want their leadership diluted by distance. A frontline worker should be just as close to the senior leader’s leadership as a VP or manager is. The senior leader needs to influence all staff members, not just those on the leadership team.

The other leaders within the organization are the crucial element in keeping the ripples flowing. By giving their wholehearted support for the senior leader and the leader’s agenda, they extend the CEO’s leadership right out to the frontlines. The CEO’s leadership is re-energized at every level and so continues to ripple out just as strongly at the edges of the organization as it did at the centre.

My favourite image of this is often seen in fireworks when one rocket goes up and explodes with great effect, and then others explode nearby with the same effect, extending the effect of the original. It’s a beautiful sight to behold!! 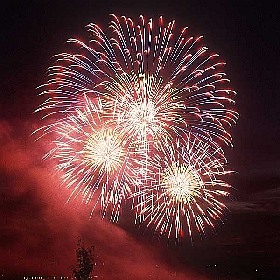 And that is what all the leaders in the organization should be doing. You couldn’t have a whole bunch of leaders all doing their own thing. The quote at the top says leadership team members support the CEO and the CEO’s agenda in public and in private. Just imagine if someone on the senior team were to say:

As the agenda is passed from COO to VPs to managers and supervisors, each leader takes the agenda and “adds more meat to the bones” so that at each level it becomes increasingly more specific, detailed and operational. Every leader has the creative freedom to determine how the agenda will be applied in their own work areas, but always in harmony with the agenda they received.

In “The World of the CEO” (also in Executive Teams), Nadler & Heilpern say that “To be successful…the executive team must effectively become an extension of the CEO’s personal leadership, a force that projects the CEO’s vision, values, objectives, and requirements out into the organization.”

In one sense, the CEO’s agenda is personal because there is a reason why one particular person holds that role and not another. There is something about that particular person the board wants to have impact the organization. So there very well could be a truly personal component to the leader’s agenda because, especially in a change situation, the leader is bringing his or her own expertise to the table. But in another sense, the CEO’s personal agenda is not so personal, since whenever possible it is developed with the participation of the leadership team. CEO’s draw on many sources for inspiration: observation, friends and peers, past experiences, and most importantly their own leadership teams. A CEO normally adopts a position only after consultation with the leadership team, and when adopted, the team’s position then becomes part of the CEO’s personal agenda.

The principle at issue here really is just common sense, that there not be any division in leadership within an organization. Debate and lively discussion are encouraged, but only within the team when the team is assembled, or one-on-one with the leader, but never outside of those conditions. The principle of ‘cabinet solidarity’ applies, for the good of the organization.

The ‘ripple effect’ of leadership applies not just to the senior leader, but to every leader in the ministry. All should enjoy the same ripple effect and see their own leadership extended further through their work areas. The whole organization then benefits from a cohesive leadership team.