John Richardson passed away Sunday night, October 21, 2012 at 100 years of age. As I reflect on his life I think there are some lessons that can encourage everyone, but from a leadership perspective there are two that are paramount. 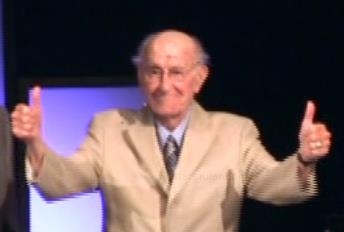 John told me he never experienced the more spectacular ways God uses to communicate (such as dreams, inner voices, etc.). Instead, he lived his life and made his decisions based on other ways God uses:

If anyone feels like a second-class Christian because they haven’t had the more mystical experiences that someone else has had, they should take comfort that those are not the only ways that God communicates. Most often, he guides us through what appear to be very ordinary means. In fact, I sometimes think that the more spectacular guidance from God is reserved for those who are too dull to discern God’s voice the more ordinary ways. At least, I have experienced it that way some times, such as when he led me to stop being so planful.

I remember a preacher who, as an illustration, said that someone was walking down the street and God came up from behind and whacked him with a big stick, knocking him flat on the ground. When he recovered, he complained to God, “Why did you have to hit me?” And God replied, “Well, I whispered in your ear a few steps ago to stop, and you didn’t hear me. Then I tapped you on the shoulder to get your attention so I could tell you to stop, and you disregarded me. I tried blocking your way, but you kept walking forward. You were about to get hit by a truck if you crossed the street, so I had to knock you down to save you.”

John always heard the whispers. He didn’t need the spectacular “whack” from God! Pastor John was a very practical and reasonable man who made his decisions based on his knowledge of God and his God-given capacity to think and reason. It never led him wrong. You can do the same. As a leader, be alert to God’s activity in the ordinary course of your life. You should expect him to be hard at work in the world, talking with you all the while.

John never tried to advance himself. His ambition was to do nothing else but to serve God. As I’ve recounted in his conversion story, he never applied to pastor a church. In every case, the church invited him to come. He did not lay out a career path for himself. He did not think about how to move to a larger church. He simply did what God had called him to do, wherever that was. He stayed where he was until others (orchestrated by God) came and led him to a new church.

I’ve worked with people who have a career plan all mapped out, with deadlines for promotions and such, and it is clear to everyone in their work area that they are invested in themselves and are essentially using the current job as a stepping stone to something better.

I’m not against moving up and having some ambition, but[TweetSelection] if your focus is your career, rather than your service in God’s call, watch out![/TweetSelection] Everyone and everything around you could become nothing more than a means to an end, and everyone will feel it.

Because John relied on the Lord to initiate all his moves, he could stay focused on the congregation he was presently serving, giving them his full attention. He was very moved by how people from previous churches kept up with him over the years.

In July, he told me about a woman from one of the churches who for more than forty-five years had called him on every birthday to wish him well. That kind of relationship is only built when people are truly present with others in the moment.

God does raise people up and lead them from one experience to another, but it is God who makes change happen. When you think it is time for a change, make sure it is of God. A couple of questions to ask yourself are:

In addition to those two reflections, there are two more that can benefit anyone.

Over the thirty-one years I knew John, I did my best to respect and honour him for the fine man that he was. Others did too. For more than 25 years, several widows from the church helped him care for his wife Irene as she suffered from Alzheimer’s, did his laundry and generally helped him out. The last time I saw John, these women were putting his laundry away as I entered his room. What a testimony to honouring the elderly!

In Leviticus 19, the Lord commands Israel saying, “Each of you must respect your mother and father” and “Stand up in the presence of the aged, show respect for the elderly and revere your God.” It is important that we not cast the elderly aside. I and many others learned a lot from John. He told me stories from his experiences in the 1930s and 40s that helped me understand the present much better. When someone has seen it all before and shares with you, you have a much broader perspective from which to view the fads, crises and happenings of today.

Finally, it was really great to see a life come to a close that was well lived and unblemished. John Richardson had no regrets. That is inspiring! Make it your ambition to live a life worthy of your Saviour.

I’d like to close by letting John have the last word. Here he is at 100, singing with his daughter the song “I Don’t Regret a Mile.” Enjoy.