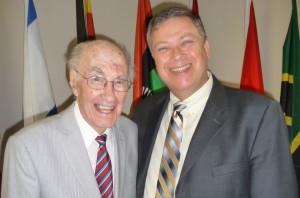 My hero-in-the-faith, John Richardson, was called to ministry in 1959 at the age of 47. This wasn’t quite a mid-life career change since today he is a very healthy 97 year-old, but it was close to mid-life. [Pastor John passed away October 21, 2012 at 100 years of age.] (CCCC members will remember John as the banquet speaker at the 2007 conference.)

John was a senior manager at a textile company and could see that the industry had nowhere to go but to decline. While quietly looking for another management job, he was asked by the pastor of London Gospel Temple to come and help him at the church. John had no plans at all to enter ministry. He had no Bible college education or any other experience that would qualify him to be a pastor other than he was a man on fire for God. A call to ministry was really out of the blue for him. But when he considered his options, John discerned that God was indeed calling him to leave secular employment and enter full-time pastoral ministry. He prepared his family for a change in lifestyle, resigned from the textile company, and moved to London, Ontario.

Pastor John served in several churches over the next twenty years, but never sought a church in his career; all his pastorates were offered to him. I met John in 1981 when I joined the last church that asked him to come and help. He retired while at that church and he still attends every week to this day.

This gifted pastor discerned his call to ministry based on love for God, personal circumstances and opportunity. This will be a long post. It has taken a lot of time to write it and I don’t want to break it up into two posts because it is one big thought. So please be patient as I think you’ll find it helpful. There are learning points below, but the story of my call precedes them in order to demonstrate that your call doesn’t have to be just like someone else’s and so that I can refer to my story in the learning points.

My call was different

My call to ministry was not like John’s. I knew from my preteen years, I think almost to the time I was saved, that somehow God was going to use me some day to serve his church. I don’t know why I thought that, I just did. I continued to have that thought many times over the years, but I had no idea how one serves the whole church. A church or a denomination, I understood, but the broader church? I thought it quite presumptuous to even think about it! Who am I? So I just went on with my life.

But on May 25th 2001, I asked God a question, “Why have you given me so much vision for my church, for my clients, for everyone around me and nothing for me?” The answer was so clear that I pulled over to the side of the road in shock. I knew instantly that God had given me a call and the call was still valid this many years later! I went home and told my wife I was going to go to seminary to prepare for whatever God had in mind for me. She instantly agreed without reservation (now that’s confirmation!). I met with trusted people from my church who supported my sense of call to ministry. (Thank you Marshall, Jim, Ray, Laurie and Walt.)

Two weeks later I was enrolled at Tyndale Seminary and two weeks after that I started my first two courses during the summer term. I was not then aware of a call to CCCC, I was just being obedient in taking the next step in preparation to serve God.

When my wife and senior pastor saw the job ad for the executive director of CCCC, they both recommended that I apply. God orchestrated events in a marvelous way during the next six months. The key for me was a one-week spiritual retreat that was part of my MDiv program. The issue I brought to the retreat was whether I should pastor a church or lead CCCC, which had been offered to me subject to one more interview. I thought one was a test for the other! The spiritual director said something life-changing and liberating. “Why do you think God has only one perfect plan for you? Don’t you think in his graciousness God may give you two opportunities, equally pleasing to him, and then take delight in watching you make your choice?” He suggested a prayerful walk in the woods during which I realized that neither ministry option was more spiritual than the other, they just fulfilled different purposes in God’s plan.

I came home and conferred with Marshall Eizenga, then associate pastor at my church, who had watched my spiritual formation for fifteen years by that time. He confirmed the appropriateness of CCCC for me.

So my call was discerned based on a clear call to prepare for something (I didn’t know what) coupled with opportunity and guidance from several people that all aligned with a long-standing feeling I had as to God’s plan for my future. The other half of the equation is that the CCCC board independently discerned that I was called to lead this great ministry. My denominational advisor also agreed it was a good use of my gifts. We were in agreement and God’s call was confirmed in community.

Everyone has their own story about their call

As I travel for CCCC and visit our members, I always ask people how they got into the ministry that they are now in. And every time, I get treated to a unique story of how God worked in someone’s life. I’ve never heard the same story twice, and since God works in different ways with different people, I don’t believe there is a formula for discerning your call. What we learn from those who have gone before us is: 1) to be open to God working through us in unexpected ways; and 2) that we discern his leadership by engaging in Christian spiritual practices and spiritual reflection.

How to discern your call

Here are some observations you may find helpful.

So, assuming God is calling you to some particular part of his mission, he will do it in some way that is likely to be unique to you. You’ll have the delight of seeing God give you your own story of how you were called. But these tips should help you be ready for the call when it comes. May God bless you richly with a satisfying life of service, whatever your call. Would you like to share the circumstances of your call? I’d like to hear it.

Thoughts on Discerning your call