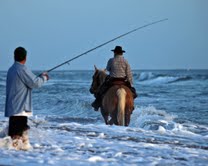 Many thanks to Greg Boreham for permission to use his photo.

I had a dream the other night about a cowboy who was no good at rounding up cattle, so he became a fisherman. I woke up chuckling about a wrangler becoming an angler! Aside from proving that I do have a sense of humour when I’m unconscious (although I hope I can be funny when conscious too), it made me think about how God communicates through dreams. Two dreams in particular have shaped my approach to how I lead CCCC (I’ll share them below as examples), yet I can’t remember a Christian leadership book that discusses the role of dreams in a leader’s life. It may be that someone made a passing reference to dreams, but certainly there has been no extensive writing about it.

It is important that you consider the possibility that God might use a dream to say something significant to you. I took a life-enriching class at Tyndale Seminary called Foundations of Christian Spirituality taught by Dr. David Sherbino in which we had one lesson on dreams and then some practice sessions at interpreting them (there was no textbook for this). Here are some key points I learned.

I pay attention to any dream that is particularly striking or vivid. I don’t have them often, but when I do they are virtually always of the subjective type and are helpful for my development.

Ask God to reveal the meaning of the dream to you and then reflect on it. As we see in Genesis 37 (Joseph’s dream of his brothers bowing to him), a dream from God does not necessarily mean you actually dream that God is speaking words. Joseph’s dream was symbolic and had to be interpreted (although the interpretation was pretty obvious).

Now, here’s a quick overview of my two dreams and how I applied the principles and questions above to interpret them. In each case, I could have simply said to myself, “That was an interesting dream” and left it at that. But I sensed there was more to the dream than just an interesting scenario and it was as I prayed and reflected that the underlying meaning came clear to me. In both dreams I am captain of a large cruise ship. I haven’t been on a cruise ship since 1972 (alas!), and have never dreamed about them other than these two dreams. There was nothing at the time in my life to cause me to dream as I did, so these are not association dreams. By the way, here’s a picture of me at the helm of the MS Gripsholm in December 1968. (The ship was on autopilot, so they told me not to worry about messing up!)

The Captain and the Pilot

The first dream was in early October 2001. I was in my second term at Tyndale and had decided to go full-time, which meant shutting down my business. It was a scary time for me (but my family was supportive). God had already told me in other ways to stop planning my life because his ways are not my ways and his thoughts are so much more than my thoughts. All that my puny plans did was inhibit the Lord’s plans for me. In the dream, I was captain of a cruise ship and could make it go anywhere in the world. But when I entered a river leading to a harbour, a pilot came on board. He didn’t provide me with suggestions for how to navigate the river; he took over and gave direct orders to my crew while I stood to the side. I gave him command of my ship because I trusted him. I was confident that he knew the waters better than I did. It was clear that it was still my ship, I was still the captain, but the pilot was giving the orders.

In my dream, my emotional state was full of confidence and trust. I felt safe and secure. Since he was working with my permission, I did not feel usurped. In real life, I was quite nervous about my situation and had no idea where God was leading me. All I knew was that I was done with secular work. Upon reflection I realized that God was telling me to trust him. I was to stop planning and let him lead me. He gave me a picture of me blindfolded, hanging on to his sleeve. When he took a step, then I could take a step. This is the way it is to be forevermore, and I have resisted committing to a specific plan ever since. I now think about the future every day, but any plans that result are subject to change at any time if God leads otherwise. I am committed to our mission, not a particular means of fulfilling it. Our action plan is the default plan if nothing better comes up.

The second dream took place two years later, in January of 2004. I was still new at CCCC and focused on the needs of the organization. I dreamt that I was a new captain and reporting to my first command. The cruise ship had a small cabin just off of the bridge for the captain. It was very tight, the length of a bed and just a foot or two between the bed on one side and the washstand and desk on the other. I thought it was pretty spartan, like you might see on a battleship, but I accepted it.

After some months had passed, the chief steward asked why I hadn’t moved into the captain’s quarters yet. I had only been on the bridge or in my cabin the whole time and didn’t realize there was more than the cabin available for living quarters. The steward took me to a massive and luxurious two-storey apartment. The first floor was a huge room the full width of the ship with windows on three sides. This was for entertaining people. The personal living quarters were upstairs. It had everything you could want and I could entertain a hundred or more people there easily.

The steward said the crew was disappointed I was only using the captain’s duty quarters because the captain should be entertaining the passengers and acting like a captain. I felt like I couldn’t use these quarters because they were too grand, but the steward assured me that this is part of the role of being a captain. I was not only to lead the crew, but also fulfill the expectations that the passengers had of their captain.

I hadn’t realized there was more to being a captain than supervising the bridge. It was clear that the spacious quarters were given to a position, not a person. I didn’t personally deserve the quarters, the position that had been given to me required them.

The major emotion that I felt was a combination of wonder as I discovered the full extent of my role and also the feeling that the captain’s quarters were too much for me to accept. With prayer and reflection, I realized that God was calling me not just to leadership of CCCC, but was also giving me a platform to serve ministry leadership teams with the unique blend of gifts, education and experience that God has blessed me with. This dream meant that I could not be content merely to be an anonymous leader within CCCC, but needed to humbly fulfill a more public role as well. My research, doctoral thesis, writing and this blog are examples of the result.

Listen to your dreams

So, the next time you have a vivid dream, before you slough it off as just another dream, make it a matter of prayer and reflection to see what it might say about your development as a person or as a leader. It just might be a message from God!

Thoughts on Dreams and Discernment