Christians and the power of the state

The picture above is me sitting in the Speaker’s Chair in the House of Commons. Oh, don’t I wish. Benevolent King John seated comfortably on his throne!  Imagine being king or queen for a day. What laws would you proclaim?

We live in a litigious society that is polarized around issues of morality and religion and where people are ready and willing to use the coercive power of the state to enforce their positions on others. That combination means that Christians are more and more finding themselves having to deal with court cases, tribunal hearings, and government policy or legislation initiated by others. This puts us on the defensive, trying to protect values that we believe are beneficial to society, or (more recently) to protect religious freedom and rights.

As I’ve justified before, we should use the available tools of the state to defend ourselves. I am glad we have highly skilled and knowledgeable voices such as the Evangelical Fellowship of Canada to speak and act on our behalf. And of course, the Canadian Council of Christian Charities gets involved too, when an issue affects the life and operation of a Christian charity.

But there are two cautions about using the state’s institutional power structures to promote or protect our mission: 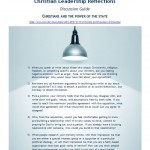 Hunter says there is a yearning for “a way [forward] that has integrity with the historic truths of the faith and the witness of the Spirit and that is adequate to the challenges of the present moment.”

While acknowledging the importance of responding to the legal and political challenges of our day, which require us to be present in the institutions of the state, we must show the world that another way of resolving differences and conflict is possible. This way has at least two components:

The conflicts we are now involved in (mainly over religious freedom and rights) are all about different communities learning to live with each other in peace. Radicals on both sides would probably rather that the other side didn’t exist anymore, but the fact is that both sides are here for the duration, whatever the persecution and difficulties. So we need to be big and find a way to peacefully co-exist.

This will sound very naÏve, but it is the right thing to do. We must engage the opposition in dialogue as both an opportunity to build relationship and as a problem-solving exercise. The challenge for both sides is to think outside our boxes as we dialogue, using all the problem-solving and creative thinking tools we can.

Rather than jumping straight into a fight over their positions, we need to understand both who they are as people and their positions. We need to learn about their values, goals, concerns and fears so that we can develop mutually satisfactory solutions. Our irreconcilable differences should be as few as possible, after all alternatives are exhausted, and will require that both sides be willing to let them be.

We must not presume from the outset that peace is not possible. That would go against the whole Christian project of universal reconciliation. There are reasons why people are hostile to Christianity and we need to acknowledge whatever part we have played in developing their hostility and repent of anything that needs repenting.

And it goes without saying that we need to pray for them. Full reconciliation and peace is only possible when there is spiritual peace between us as well.

We need to show the world that we are not adversaries, but that our points of difference are intended to be for their good. Christian service is how we can show love and care for the world, following in the footsteps of Jesus who gave himself sacrificially for us. He was a powerful person, not because of legal or political power, but because of his life of service, fueled by the power of the Holy Spirit.

Many Christians today seem to feel as powerless as the apostles did immediately after the Crucifixion. But we must remember that it wasn’t long until the Holy Spirit showed up, and then everything changed! Over those early years of the church, Christ’s followers were known for what they did with passion and power: they cared for the sick, rescued unwanted babies left to die, and invited the marginalized into welcoming, caring communities. They charged ahead and unilaterally created the change they wanted to see. This is what attracted people to the faith.

By living authentic, caring, and loving lives, investing ourselves for the welfare of our society, we gain very strong power, but power of a different sort – informal power, very different from the state’s power. This is power by example, by modeling. Speaking from such a place of service is the best way to promote our values of generosity, community, and sacrificial living. This is what will attract people to Christ and voluntarily choose to live a life that pleases him.

It is important that we participate in the full life of our community, which means participating in its political and legal life, but first and foremost, evangelism, discipleship, and good works are the means by which we can best accomplish our goals.

Key Point: Love and kindness will win the day

What the church must address