There’s a big world out there!

Pastors of evangelical churches, this post is primarily for you (although it has good thoughts for us all). Evangelicals currently have a pretty negative reputation in secular society. It would help our cause if every evangelical engaged with and made positive contributions to society as an openly evangelical Christian so that the public can see the good that we do (Mat 5:16). Do we stand confidently in the public sphere with a strong sense of our own God-given individual power? In the current polarized environment, I wonder.

Are your parishioners looking out church windows anticipating what they’ll do out there? Or are they looking out in relief that they are comfortably ensconced in a safe haven? Have they got the ‘fire in the belly’ that the ancient church had? A great question to consider is: How might we recapture the spirit of the ancient church?

My prayer is that every member of your church will feel strong, bold, powerful, and purposeful and that they will go out and fully engage with their world as evangelical individuals.

What keeps us disengaged from the world

The problem is that many evangelicals do not feel strong, bold, powerful and purposeful. Many of us huddle in our churches and Christian enclaves. If we look out the window at all, it is only to more greatly appreciate the cozy room we have made for ourselves inside or to worry and despair about how great the darkness has become.

Various sources show significant problems in the whole church, and the evangelical wing is not immune. Even where reports show we are doing better than other branches of Christianity, the results are still nowhere near where they should be. Let’s look at several issues and see what pastors can do. 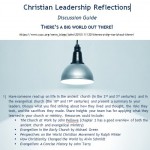 Indicators of mission success are declining

The biggest issue is the declining engagement by evangelicals with their own faith! The 2013 Canadian Bible Engagement Study found that between 1996 and 2013:

We have to admit that we can’t go on as we have. The world is changing ‘out there’  and ‘in here’. If you disconnect from the primary means by which God reveals himself to the world (the Bible) and from the meetings designed to build up your faith (church attendance), your spiritual and missional life can only cool and eventually die.

The Canadian Bible Engagement Study finds that reading the Bible regularly is connected with:

Here’s the report every pastor should read: 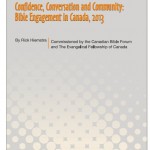 Salvation: More than a ticket to heaven

Another issue is that some people understand salvation as nothing more than forgiveness of sins and an admission ticket to heaven. Once saved, they’re just putting in time until they die. These Christians squander a lifetime of productive activity that God has in mind for them to do (Eph 2:10) because they bracket out everything between their salvation and death/resurrection.

They do this to themselves because they’ve already done the same with Jesus’ life, jumping directly from Christmas to Easter. They’re the ones who say Jesus was born to die for our sins, which is true enough, but they forget that Jesus was also born to invite people into a newly defined community of God’s people, and to demonstrate how his Father wants us to live in the present time. Their Bible might as well contain only Genesis, Romans, and Revelation!

Remember, a tombstone with two dates separated by a dash tells you nothing about the person’s life. Their life was in the dash. So’s yours, and that dash is very important to God. 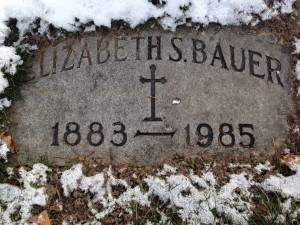 Personal photo. I have no connection to Elizabeth, but in honour of her ‘dash’, click the picture for some information about her.

When evangelicals treat Jesus’ life and ministry as a dash, we are left with nothing to say or contribute to society aside from the salvation message. Evangelism is our primary mission, yet surely a Christian perspective on the human condition should produce many ideas for improving our world – ideas that secular people could accept as good ideas on their own merit and that would make life a little more like what God intended.

It’s too hard to think about all the world’s problems!

Another reason for not engaging the world is that it’s just a lot easier to ignore it. Reality requires hard work. It’s tempting to say, “I’d rather be thinking about what a nice life I will have in heaven than face the ugly truth that there are abused, starving, victimized people, and also abusive, oppressive, victimizing people, and even people who just don’t care about anyone else. Besides, isn’t God going to blow everything up and start fresh anyway?”

Well, on the latter point, there is significant theological debate about the “end of world” imagery used in Scripture. Regardless, surely no one would argue that we shouldn’t care for our world and alleviate suffering as best we can!

It seems human nature avoids hard thinking. For example, most people avoid thinking about their own death. Who wants to think about their Will, their burial, and life that goes on for others but without them? Well, the fact is, we die. That’s life!

In the same way, it’s hard to think about the world’s problems and how to bring God’s love into situations of misery and suffering. Life is much less complicated when you avoid the issues or blame them on the system, especially when the Bible says this is the way it is (eg., Mat 26:11). But we simply must address them because God has called us to be his people and live for the sake of the world. Avoidance never made anything go away!

Pastors, God saved us so that we could be his agents. Preach about the hard issues and give your congregation a biblical-theological perspective that will help them deal with:

We can do better

Pastors, I’ve laid out what you can do. May God guide you as you work through the suggestions.

Christian agencies, you have an important role because with your specialized knowledge, you can provide resources and thought leadership to our pastors.

And denominations, you can encourage your churches to see a new way of being the church. You can encourage creativity and risk-taking. You can share knowledge and provide thought leadership.

To all ministry leaders, do everything you can so that all believers think of themselves “as Christian activists imbued with a strong sense of the power of their own individual will.

Key Point: The church exists for the sake of the world, so it must address the problems of the world.

Thoughts on There’s a big world out there!

What the church must address