Like you, I’ve heard the news that a terrorist acting in allegiance with ISIS committed an unspeakably evil act of terror targeting Orlando’s LGBT community. I grieve with you for the people who lost their lives or who were hurt in the attack. When a religion is misused, it is the responsibility of the religious community, and especially its leaders, to speak out against the misuse of their religion and condemn the unlawful behaviour.

Although this massacre was not committed by a Christian, as a Christian leader I want to take this opportunity to state very clearly to the general public three declarations which I believe every Christian denomination in Canada would affirm:

There is much to be said in terms of the theology that supports these three declarations, but that is for another time. Today I want to condemn violence in all forms, but especially violence that is motivated by a misguided understanding of a religion or of a secular ideology. 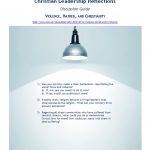 May God bring peace and solace to the families of the victims of the Orlando massacre. All humanity has suffered a loss with the murder of ordinary people who were simply living their daily lives.

Note: Barry Bussey has also written for CCCC on this horrible event.

Thoughts on Violence, Hatred, and Christianity