And everyone liked them…

Everyone was amazed by the many miracles and wonders that the apostles worked. All the Lord’s followers often met together, and they shared everything they had. They would sell their property and possessions and give the money to whoever needed it. Day after day they met together in the temple. They broke bread together in different homes and shared their food happily and freely, while praising God. Everyone liked them, and each day the Lord added to their group others who were being saved.
Acts 2:46-47 (CEV)

“Everyone liked them!” Or, as other translations put it, “They enjoyed the favour of all the people.” Considering that only a short while before this time, the crowds were calling for Jesus’ crucifixion and the apostles were in hiding for their lives, the turnaround in public opinion is amazing. While not everyone accepted their beliefs about Jesus Christ, they did respect his followers, the first Christians.

What strikes me as a message for the church today is that the ancient church was able to preach the truth without compromise and yet win the favour of the people by how they lived. If we could but do the same today!

The Obstacle: They made no compromise

You would think that the key to popularity would be to preach a nice, agreeable, non-offensive message supported by good deeds that people would appreciate. But this is not what the ancient Christians did. They performed good deeds, but their message was anything but nice, agreeable, and non-offensive! It seems very strange that the public held Christ’s followers in high esteem in spite of some pretty blunt preaching. Peter certainly didn’t pull any punches in his sermons, saying,

Jesus of Nazareth was a man accredited by God to you by miracles, wonders and signs, which God did among you through him, as you yourselves know….And you, with the help of wicked men, put him to death by nailing him to the cross….Therefore let all the house of Israel know for certain that God has made Him both Lord and Christ—this Jesus whom you crucified.1

The ancient church did not compromise or sugarcoat its message to win people to Christ. In those days, death on a cross was clear evidence that Jesus was not the Messiah, because everyone in that society knew that the Messiah would not die but would be victorious over Israel’s enemies. And no true Messiah would surrender to an execution so horrible that it was reserved only for slaves and outcasts. There couldn’t have been a bigger obstacle to public acceptance than the cross!

But the ancient Christians didn’t avoid talking about the cross, the very thing that the public believed most powerfully argued against the Christian faith. The church countered that argument against Jesus’ messiahship with their own much more powerful argument based on his physical resurrection and the hundreds of people who had seen the risen Christ. Their preaching didn’t cater to the audience but seriously disturbed them to the point that “they were cut to the heart and said to Peter and the other apostles, “Brothers, what shall we do?”

We need to speak to our audience in a way they can understand, but we shouldn’t downplay aspects of our faith which we think they might find troublesome.

For example, in today’s culture:

A fellow elder at my church heard a pastor leading people in a sinner’s prayer at a seeker-sensitive evangelical church. The prayer completely avoided mention of sin and the cross and effectively made Jesus not much more than an inspirational person we aspire to be like. If people make a decision for Christ under those pretenses, they may later feel they were the victims of a bait and switch when they find out the whole truth of Christian faith.

Like the ancient church, the church today needs to speak truth, not avoid it. There are wise and unwise ways to preach the Gospel today, but the whole truth needs to be preached.

So, be unabashedly evangelical in proclaiming the Gospel! 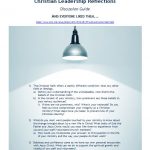 A Powerful Attraction: They practised what they preached

At that time, they expected Christ’s return in the very near future, so they weren’t thinking long term. This led at least some of them to liquidate assets to care for each other, something that is not sustainable over the long term. (Or maybe that’s a sign of our lack of faith that our Father will provide us ‘our daily bread’ as we need it.) Nevertheless, Christians as a group are still the most generous people, who are ready to share their resources to help others, often non-Christians, who are in need.

As part of their spiritual growth as a disciple of Christ, Christians today should ask themselves how they could demonstrate more of their faith in their lives. What have we received from God that we haven’t personally given as fully as we could to others?

What could you do to demonstrate God’s traits in your life so that others could see them at work in and through you? What could your ministry do? If we believe something about God, then we should find a way to act on that belief and pass the fruit of the belief on to others.

So, let’s make our church congregations a true community seven days a week through individual acts of love both within and without the community.

An Impressive Result: They walked in God’s power

Miracles and wonders accompanied the apostles as they did their work because God’s power flowed through them. The results were impressive, as the book of Acts records. Their secret was that they believed Christ would be active in their world through the Holy Spirit, and they expected to see things happen. So they did! They were bold and confident as they went about their daily business, sharing the Gospel and doing good to others.

Are we as bold and confident today? We will develop boldness and confidence when we have our own personal, life-transforming, meetings with Christ. When we know what God has done in our own lives, we will have faith and boldness to tell people what he can do in theirs. This is why we should be doing everything we can so that every Christ-follower is alive to the spiritual, theological, and missional components of Christian life. When they are plugged in to God spiritually and understand who he is and what he is about in this world, they can then express their faith in word and deed to the world around them.

So, be open to and expect the power of the Holy Spirit to be at work in and through you each and every day.

Let’s take our faith to heart and make it real in every aspect of our life and being, so that others will be drawn to the beautiful difference that Christ makes in each person.

Key Thought: The church needs to fully live up to Christ’s intent for it and walk as his disciples walked – in love and in power and in community.