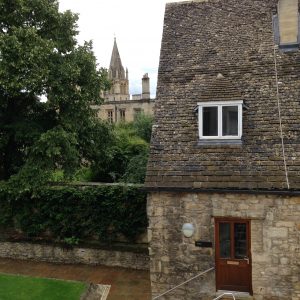 The view from my room at Christ Church, University of Oxford.

I am really blessed to be able to attend the Summer School of Theology at Christ Church, University of Oxford. Over the next two weeks I’ll be taking four courses:

Since this is the 500th anniversary of Luther nailing his 95 Theses to the Wittenberg church door, the beginning of THE Reformation, the Summer School theme is Reformation: Reform and Renewal in Christian Life and Experience. There have been many reformations in the church over the millennia, and the question is, Are we in need of another reformation?

This is a timely question, and the opportunity to study up on how the church has historically dealt with upheavals of various types might be instructive for us today. How has the church decided what to hold fast to, and what is cultural and can change or adapt?

Monday was the first day of classes and I’ll just give some key ideas and impressions. Of course, these are provisional ideas because they will all be developed over the next four days.

Today we concentrated on the first three years of the Reformation: 1517-1520. All of the major issues that the Reformers had with the Catholic church were on the table by the end of this short period. Here are some interesting points from the lecture:

No Faith in Religion?

This course is promoting faith while critically assessing religion (the institutional structures of the church). It was heavily philosophical today, and I’ve never taken a philosophy course, so this is all heady stuff for me.

The whole lecture boiled down to a couple of key points:

So there’s some food for thought for you. Hope you enjoy ruminating on it.