At Christ Church: I heard a great story today! 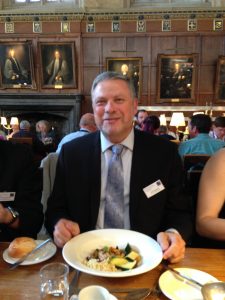 At the formal opening dinner.

Here are some highlights from today for the two courses.

In the morning class, we covered the Council of Trent, which was the Roman Catholic response to the Reformers. I’ll share two points that are relevant to the relationship between church and society in our time.

The Council recognized that people did not know the Bible because the priests were not trained to preach the Bible. Many did not know Latin and could not even understand the words they recited of the Mass. Because the people were not allowed to read the Bible, they got their theology from the gnostic gospels and other non-canonical books and tracts. These had lurid details of Purgatory that made people eager to pay for Indulgences and Masses for the dead.  The lesson for us is that if parishioners are not getting their biblical-theological knowledge from their church, they will get it from somewhere, and the quality of what they get could be anything from very good to terrible!

The Council responded by creating many seminaries to train the clergy. It recognized that the job of theologians is to make the Bible intelligible to the church.

There are lots of passages even in the Bible that could be misunderstood from a simplistic reading. For example, when Jesus says to cut off your hand, should you? How do people know how to properly read and apply the Bible? How do we help Christians move from their first experience of faith in Christ to a mature, nuanced, understanding of what Christian faith is all about? How can we help them get an accurate picture of who God is? This is a task that theologians can help us with.

A good example of a theologian working to improve biblical and theological literacy among the laity is the “For everyone” series of books put out by theologian Tom Wright (a.k.a. N.T. Wright). Advent for Everyone and Matthew for Everyone are just two of the many books in this series. Few will read his Paul and the Faithfulness of God

at 1,700 pages, but anyone can read the accessible books in the Paul for Everyone series, which are about 175 pages each. Small group studies and blogs like that of John G. Stackhouse Jr are very helpful.

Cardinal Cajetan extended an olive branch early on to the Reformers with three proposals:

Unfortunately, the Council rejected the Communion cup proposal because it would mean admitting that the church had made a mistake in the past, and they rejected married clergy because it was “inopportune at this time.” The olive branch died on the vine!

I would hope that if the Evangelical church were in a similar position, we would not be afraid of admitting a mistake but would do the right thing without delay.

No Faith in Religion?

In the afternoon class we explored faith and religion.

When secular people blame everyone in a religion for any evil acts carried out in the name of that religion, we usually say that our faith was hijacked by insincere people with ulterior motives such as politics or greed. Sincere Christians of real faith would not do those bad things.

This may be true, but secular people don’t distinguish between religion and faith. And that defense doesn’t account for times when whole populations of Christians get carried away, for example, with a political agenda and become vulnerable to being hijacked by someone running for office.

Responsible Christian leaders must ask the really hard question, which is, Why is religion so vulnerable to hijacking? Every pastor should take on the job of ‘street-proofing’ their church members. They should be biblically and theologically literate enough that they can assess for themselves whether this or that appeal for their loyalty truly represents authentic Christian faith.

Faith is the disposition of the mind and will to entrust oneself and one’s interests to the reality, reliability, and benevolence of the Living God.

The professor noted that the freedom which is inherent in faith is not typically experienced in religion. However, some structure (religion) is required if we are to express our faith in community. So one is not good and the other bad, we just want the right mixture – lots of faith, and just enough religion to hold our communities together.

We heard the story of Thomas Cooper, an Englishman born in 1805. He left the Christian church for all the same reasons that Richard Dawkins outlines in his book The God Delusion. It appears Dawkins has nothing new to say against Christianity but is merely repeating arguments from a century before!

Anyhow, Cooper became a leading speaker and author promoting atheism. He hooked up with about twenty other leading atheists and they formed the Organized Society of Atheists, which had members both in England and in America.

But that’s not the end of the story. The best part is that not only Cooper, but every other member of the Society, eventually reconverted to Christianity!! Cooper became a Baptist minister and pastored a church in Lincoln, England. In the late 1880s, the church honoured Cooper by changing its name to Thomas Cooper Memorial Baptist Church, known as tcm today.

Why did every atheist in the group return to Christian faith? Timothy Larson, in his book Crisis of Doubt: Honest Faith in Nineteenth-Century England

says there were five main reasons:

While they were skeptics, everyone said how intelligent, wise, and educated they were. When they returned to Christianity, those same people couldn’t now claim that they were ignorant, foolish, and unthinking, the usual charges thrown at Christians!

Perhaps these same five reasons could appeal to skeptics today. I have not studied them enough to know, but I suspect they would still be helpful arguments. How could you make use of this knowledge in preaching to or relating with those who do not yet know Christ?