Ahh rats! You hear a really great story that makes a really good point and you want to use it in your blog, and then you fact check and it turns out to be, well, not quite true! Nuts, but I told it anyway. Before you read this post, you should read the story, which was told in this post.

The truth about the “New College Oak Beams” story

Okay, now that you’ve read it, you should know that the New College Archives investigated this story because it has received so much attention, and they debunked the more spectacular points (the ones that make it fun to tell!). Their current website does not refer to the story, but the old site has been archived and you can still read it, although it takes a moment to load. The roof was indeed replaced in 1862 but it had already been replaced in 1786, with a plaster roof that had just enough molding to make it look like “an inverted tea tray” and no beams. And the wood for the molding was pine, not oak. Why didn’t the foresters tell them about the oak trees back then, the Archives asks. When oak was used in 1862 to restore the original roof design (with beams), the wood did come from college lands, but those lands were purchased in 1441, sixty years after the roof was originally built, so the original builders did not plan the forest. You can read the 1906 history book of New College that includes the story about the rebuilding of this roof on pages 58-59.

The truth is, the story is actually quite ordinary. As an internet search will show, good forest management has always left some trees to grow really large, for needs such as roof beams, ship masts for the navy and so forth. The point of planning ahead can still be made, but just not that the college builders themselves planned for it or that the trees were specifically saved for New College’s roof. But it is true that Oxford University held on to the forests, so they were still holding assets for future use rather than selling them to raise cash.

So when you hear a good story…

Check out the stories you want to tell. If a story isn’t true, you can still use it, but in a different way. Rather than portraying it as real, which I admit is the most powerful way to tell the story, you can say “While the story is apocryphal, its message is a powerful one…” Otherwise when people find out it’s not true, your credibility suffers. It makes you look gullible and that you are sloppy with your facts, and it makes your audience feel manipulated.

An even better story!

But in this case, a little bit of research shows there is a true story that is quite similar to the New College story and it is just as powerful. It is from the May 18, 2004 edition of the Times  [sorry – the link no longer goes to the actual story, just the homepage. Aug 3, 2012] and if you google any of the key terms you will find quite a few reliable verifications of this story. 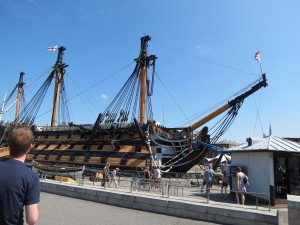 My picture of HMS Victory July 2013

IN AUGUST 1802 Admiral Lord Nelson toured the Royal Forest of Dean, in Gloucestershire, in search of timber for the naval dockyards and was appalled by what he found. Not only had a large section of the forest been plundered by the charcoal-burning industry but the trees that survived were unavailable after a dispute between the timber merchants and the Admiralty.

Nelson’s flagship HMS Victory had had a refit two years before, which could not be completed because of a shortage of wood. Nelson made a secret deal with the timber merchants and recommended to Parliament the replanting of large areas of the forest to guarantee the supply of raw materials for the Royal Navy of future centuries. By 1808, three years after Nelson’s death, Parliament ordered the replanting of the Forest of Dean and today it has the largest area of old oak trees in Britain. The trees are still known locally as “Nelson’s Oaks”.

But even Nelson’s foresight could not have predicted that the saplings he had planted would be used to repair his own vessel 200 years on. Two great oaks have been felled in the forest to provide raw material for the restoration of HMS Victory in time for the 200th anniversary next year of the Battle of Trafalgar on October 21, 1805.

The wood was used not for the masts (they are metal and always have been, a sailor on board told me) but for planking for the decks and hull.

Good forestry management includes planning for the future. Let’s manage our ministries as well as the foresters manage their forests!

Thoughts on Truth in Storytelling