How far out is your planning horizon?

I was at a conference in the spring and heard a terrific story that just amazed me and the entire audience. It was a thrilling example of farsightedness that looked ahead five centuries! The speaker assured us the story is absolutely true. It’s about a college at Oxford University. 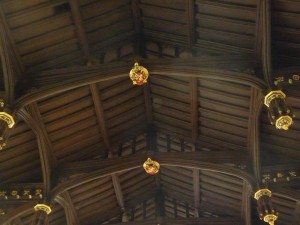 My picture of the similar roof at Christ Church, Oxford University

New College, Oxford, is actually very old. It was founded in 1379 but was the second college at Oxford named for Mary, the mother of Jesus, which is why it is called the ‘new’ college. Like the other colleges, it has a great dining hall with big oak beams supporting the roof.These are about two feet square, forty-five feet long.

In the 1860s, the roof beams were found to be full of beetles. The massive beams would have to be replaced. But where to find wood of those dimensions in the nineteenth century? It turns out that when the college was built, the board knew the beams would have to be replaced some day, and to ensure they would have the necessary wood to replace the roof beams, the college board bought some property at the same time they built the college and planted oak trees on it so they would grow and be ready over the course of several centuries. This plan had been passed down from generation to generation for five hundred years!

When I heard this story, I thought that while it was amazing that anyone would think so far ahead to plant the trees, the really incredible part was that over all those years, none of the college’s leaders ever succumbed to selling the forest to raise capital for current projects. They could have done so and said, “Let the future look after the future’s problems, and we’ll look after today’s.” But they didn’t. Their planning horizon spanned half a millennium.

How far out is my planning horizon? Yours? Are we setting our ministries up only for success during our watches or are we setting them up for our successors’ successes?

I attended an international convention once where a Japanese man gave a plenary speech about long range planning. He said he had a 300 year plan for his family. He said great things take longer than a single lifetime to be accomplished, so he had a plan for himself, his kids, his grandkids and on and on. That seemed ridiculous to me, because who knows what will happen to any family over a 300 year period? Will his kids have any kids? He never said what the plan was, but how could it account for societal change, economic upheavals, personal choices, and technological innovations?

No one can predict the future and plan accordingly. As Peter Drucker wrote, no one can foresee discontinuities, the game-changer inventions. You can’t predict what has not yet happened. What we can do is think about the future effects of events that have already occured and where they are likely to lead. Drucker called this “the futurity of present events,” or to bring it to the level of management and leadership, “the futurity of present decisions.”

A decision to plant a forest in the present makes it more likely that in the future the wood would be available. It doesn’t guarantee it will be; there could be a fire that destroys the forest only forty years before the wood is needed, but it has a higher probability of success in the future than hoping that an old forest will exist in five hundred years that will be available for harvesting.

1. The future that has already happened

There is a time lag between something that happens and its full effect, such as when the birth rate climbs or falls. The change has already happened, but its impact has yet to arrive. That will occur as the generation ages. There are opportunities of the future based on what has already happened. Leaders should be following demographic and societal trends, always asking “What does this change mean for us?” “Has anything happened ‘out there’ in other countries or industries that might affect us?” is another good question. And a final really good question is, “What are our own assumptions regarding society and economy, market and customer, knowledge and technology? Are they still valid?” Virtually every Christian ministry would benefit from addressing these questions and looking for opportunities in the future that are consequences of what has already happened.

Drucker’s second strategy is “to impose on the as yet unborn future a new idea which tries to give direction and shape to what is to come.” He calls this strategy “making the future happen.” The question he says should be asked, in a business context, is “What major change in economy, market, or knowledge would enable us to conduct business the way we really would like to do it, the way we would really obtain the best economic results?” For Christian ministries, I might rephrase the question as, “What major change in societal thinking or expectations would enable us to conduct our ministry the way we would really like to do it, the way we would make the most progress in achieving our mission?” An example that comes to mind is The Truth Project by Dr. Del Tackett. The problem that he is addressing is relativistic thinking that makes it difficult for people to accept a universal truth claim. Tackett plants a seed, an idea, in the videos that he hopes will grow and shape the future in a way that will help people accept the Good News of the Christian faith. So, thinking of your ministry, what seeds should you be planting today to create a more favourable future? Sometimes ideas float around for several hundred years before they really take hold, so this really is acting today for a future result.

Both of these strategies hold lots of opportunities for Christian ministries. Reflect on both as they relate to your mission and see what comes to mind. I am doing this for CCCC and while writing this have a few ideas that came to mind. Let’s put our thinking caps on!

Now, please DO NOT leave this blog before reading another post. You see, the story I told you about the oak beams is not exactly true after all. But that’s another story and the point of Truth in Storytelling.