It’s a great story that always inspires: How the church grew from a small band of disciples at the first Easter to become the official state religion of the Roman Empire approximately 300 years later. Think of how improbable this success was, given that:

It is astonishing that Christianity overcame a mighty empire without resorting to violence or political pressure. Instead, it had a powerful idea that proved irresistibly attractive as Christians lived it out and others experienced its blessings. Personal conversions by personal choice from both paganism and atheism to Christianity changed the Empire peacefully from within.

The history of ancient Christianity’s growth appeals to us because it gives hope that such growth could happen again – maybe even today! The growth was fueled by ordinary believers who were highly effective at sharing their faith.

Folks, we can do this!

Sociologist Rodney Stark’s1 statistical regression analysis on the growth of Christianity shows the enormous impact that ordinary believers had. Because Paul takes up so much of the New Testament, it’s easy to believe that he single-handedly caused the growth of our faith. But that’s not true. Stark’s analysis shows that Paul’s missionary work as an evangelist had no significant, independent effect on Christianity’s growth, while those of the Hellenistic and Diaspora lay communities had strong, significant, independent effects on the growth of our faith. This is not to disparage the work of Paul – far from it – but it does show the power of the laity when they take the Great Commission seriously!

Again, folks, we can do this!

According to Stark’s analysis, Christianity grew from about 1,000 adherents2 in AD 40 to 52% of the Roman Empire’s population in AD 350. That’s impressive!

Stark has done extensive analysis of the growth patterns and correlated church growth with many other factors such as urban/rural locations, trading routes, pre-existing religious beliefs in the area, social-economic status of adherents and so on. While God works in the hearts of people hearing the gospel and calls them to himself, Stark shows how the evangelism of ordinary believers brought the faith to them so that it permeated Roman society.

What this means is that God did not have to do anything miraculous to grow the church. He worked through human agency, blessing his people as they lived Christian lives. The growth rate they achieved from AD 40 to 350 was 3.4% per year, every year, for 310 consecutive years. Is that possible today? Could we hope to match what the ancient church experienced?

The same God who was at work among the ancient Christians is still at work among us today. And while Christianity overall is currently growing at 1.2% per year, we know that 3.4% is quite doable. In fact, global Pentecostalism grew by 5.4% per year, every year from 1970 to 2014 (the most recent year we have statistics for), proving that growth can be sustained over several decades when people are passionately committed to living out their faith just as those of the ancient church were.

Evidence shows that only the Evangelical section of the church is growing as a percentage of the Canadian population, so let’s focus on it as the source of Christianity’s future growth. There are two key numbers:

That’s my vision for the church. Sustained incremental growth that exceeds the general population growth. Continuously. For the next forty-five years at least, and preferably forever after until there’s no one left to convert. Forty-five years would get us to about half the population of Canada.

I’m not suggesting that we want to reach 50% in order to gain political power or any other sort of power. In fact, if I had a chance for a do-over of the ancient church’s growth, I would want the church to reject to being made the state religion. When that happened, the church got off track. Having status as the official religion of Rome caused some people to convert to Christianity only to advance their careers, status, and wealth. Nominal converts started to fill some leadership roles. The weakening of true Christian faith within churches was the impetus for the Desert Fathers and Mothers to move out into the wildernesses in protest and to keep the faith pure.

State accommodation and support of religious activity in general is fine, but a state church or religion poses serious problems to the integrity of our faith and our churches.

My intent isn’t for your church to set a goal to grow at 3.4% a year. You can if you want, but that statistic is really just an encouragement to engage in an activity which brings hugely significant results over time. It is also meant to spur you to look for evidence of fruitfulness from your congregational members. We shouldn’t settle for merely being busy with church programs and serving existing members. We can’t be satisfied with transfer growth. We must have a holy discontent if we aren’t seeing something like the Lord adding to our numbers every day.

You might get some good ideas to stimulate church growth from the reasons Stark found for the ancient church’s success: 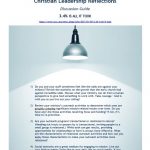 The church should be growing significantly if its adherents are acting on their faith and the Great Commission. If we’re not getting real conversions, from non-Christian belief to Christian belief, at a level above the population’s growth rate, then we need to ask ourselves “Why not?”

The ancient church was driven by passion to share their faith with unbelievers. They were willing to make significant personal sacrifices to demonstrate God’s love to a needy world. Let’s pick up the challenge they have left for us. I find this personally challenging, as you probably do too, but let’s trust God and take Christ’s mission for the church as our own personal mission!

A vision for the church