The Value of Communal Discernment

"Canoe" by Brian Scott. As art, this works well. But it can also represent all those radical new ideas leaders have. Are they brilliant and groundbreaking, or non-starter duds? Communal discernment can shed some light. Personal Photo.

I was introduced to C.S. Lewis and his wonderfully captivating world of Narnia in third grade, when my teacher brought a radio to class so that we could listen to a reading of The Lion, The Witch, and the Wardrobe.

Later, at university, I was introduced to another wonderful world – Middle Earth – first through The Hobbit, and then through the majestic sweeping saga of The Lord of the Rings, both by J.R.R. Tolkien,

People tend to assume that great authors such as Lewis and Tolkien are incredibly gifted individuals who, working all on their own with innate gifts of imagination and composition, single-handedly develop their plots and characters to tell a compelling story.

But that wouldn’t be true.

Both Lewis and Tolkien worked in community to develop their stories.

They were part of a group closely associated with Magdalen College at Oxford University,1 the Inklings. This group met in Lewis’s rooms at the college from 1933-1949 to read their developing stories to each other for critique and suggestions. The picture below shows where C.S. Lewis lived at the time – on the middle floor just to the right of the centre section, where the two white blinds are seen. 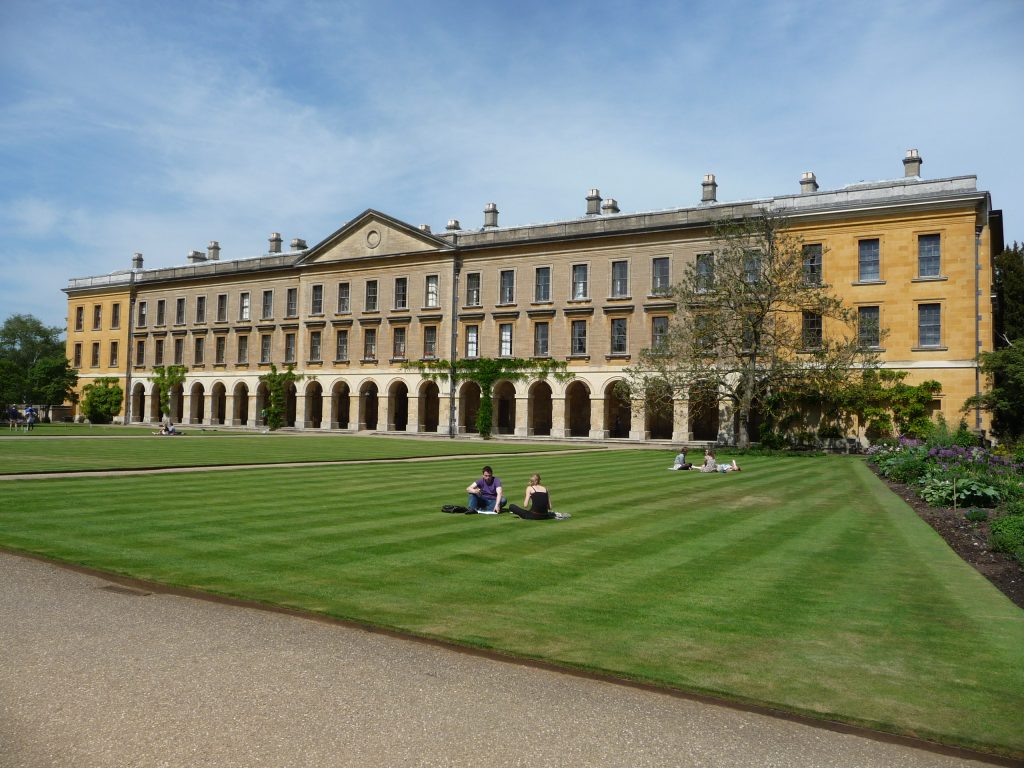 The best known place where the Inklings met weekly for friendship and lunch, as opposed to readings, was at a pub called The Eagle and Child. 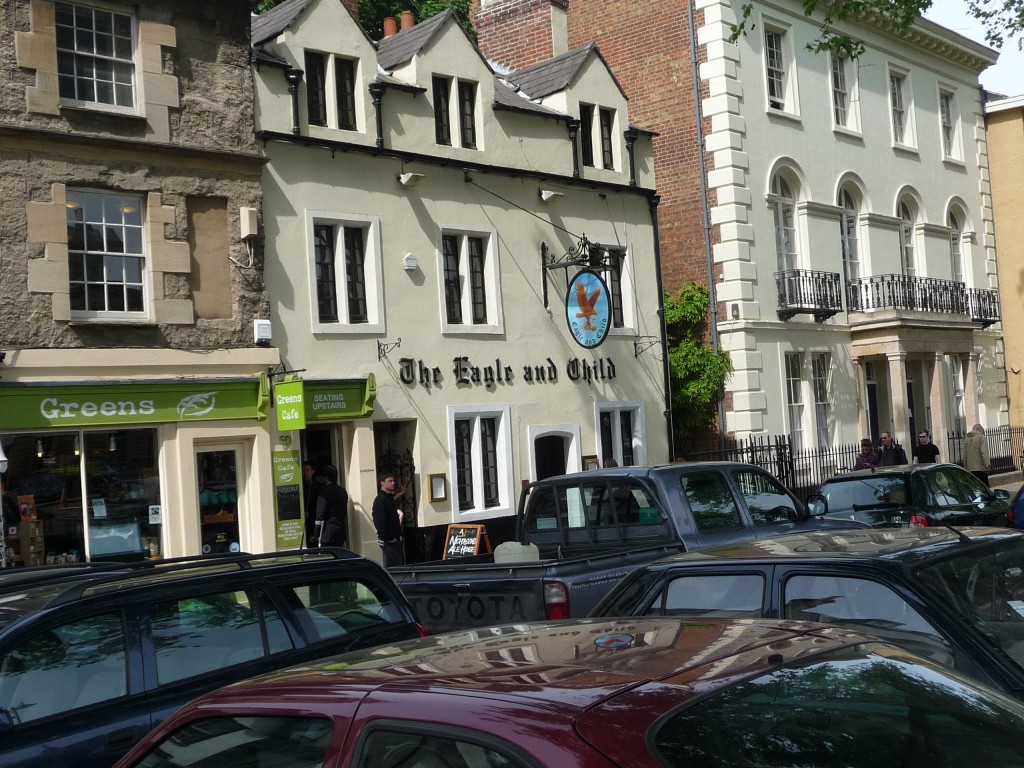 The pub where the Inklings met. Personal photo.

They sat at the table shown on the left in the picture  below. 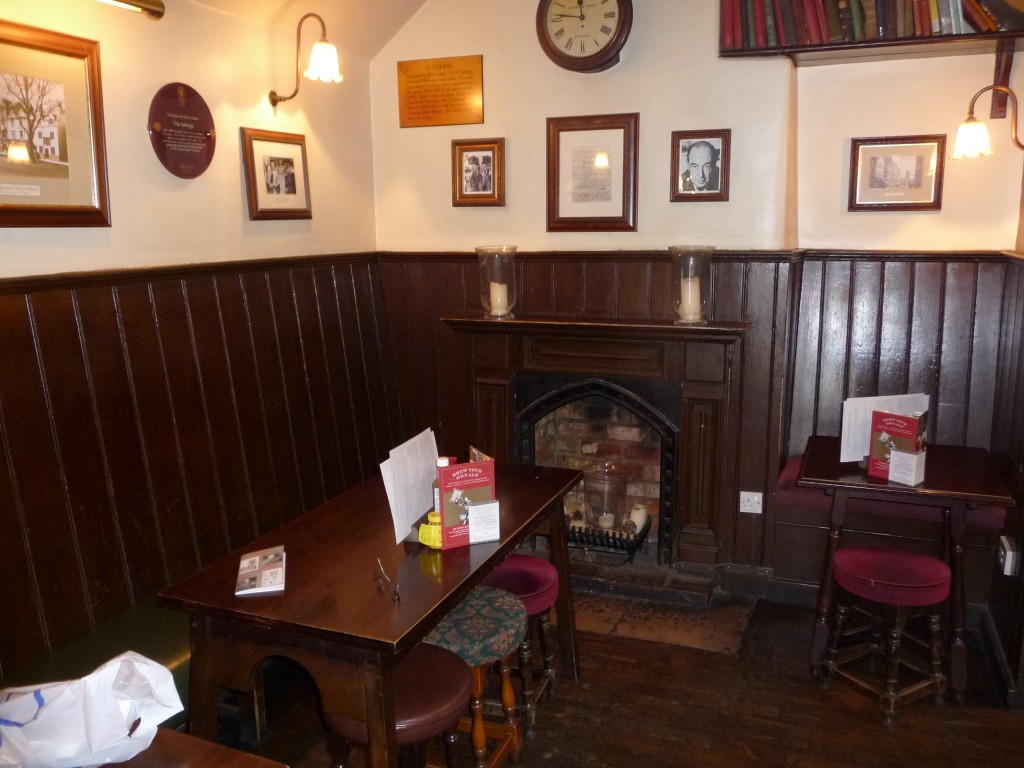 The table where JRR Tolkien and CS Lewis sat with the rest of the Inklings. Personal photo.

Leaders, like authors, are often thought to work alone, but instead of crafting stories, they craft strategy and solve organizational issues. This leadership model, developed in the early 1800s, is called the “Great Man Theory,” and it certainly can appeal to a leader’s ego! After all, who doesn’t want to be great? The theory is that an organization’s or a nation’s success can be attributed to a single heroic person, who in olden days was always a man. This theory has since been discredited, but it still lingers on, particularly in the world of organizational leadership where successful leaders are lionized as individual heroes.

Now, there certainly are great leaders, but if they believe that they represent the Great Man Theory in action and that the organization’s success is truly all bound up in them, then they are ripe for a brutal reality check. The truth is, great leaders work with teams. They are not infallible nor are they omniscient. Some leaders are far more creative than others, but they don’t have to be. A leader is simply a person who recognizes opportunity, no matter which person is creative enough to spot it, and knows how to bring a group together to make something of it.

For an example of what could go wrong with leaders who believe otherwise, just read my post on the leadership failure that sent a short-term mission team to jail. In this case, the leaders thought they knew everything they needed to know, but it turned out there were a lot of crucial things they knew nothing about. 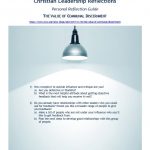 Drawing on the community

Here are some tips to help you discern your plans in community rather than alone on your own:

If you’re not sure who you should consult with, read the section “Ministry Peers” in my post It’s not lonely at the top!.