In a previous post, There’s a big world out there, I encouraged pastors and other ministry leaders to strengthen Christians within their sphere of influence to become strong, bold, powerful, and purposeful in their Christian lives so they can go out and tackle the problems and opportunities in the world outside the church. We cannot huddle inside churches with our supporters. We must go out and engage those we find challenging.

James Davison Hunter wrote in To Change the World

that there are two basic approaches most Christians take towards engagement with the non-Christian world:

Hunter makes the case that Christians of all stripes, and also those who see the world differently than we do, have all resorted to politics and the law to promote their preferred society. By politicizing everything, we have actually decreased engagement and civil discussion by polarizing the issues, forcing people into a win/lose proposition where each side sees the other as the opponent or, more likely, the enemy to be defeated. In many cases, the rhetoric has become downright uncivil. The opposing sides never actually meet to talk, they just shout at each other in court, through the media, or while talking to their own supporters. It becomes a winner take all scenario and no one wants to lose.

But as I’ve written previously, politics and the law can only do so much. They can coerce but they can’t fully address the human elements. They can force a change in behaviour but not in attitudes, because they can’t instill values.

We should learn from our past and behave differently going forward. There has to be a better way, one in which we actually sit down and talk with each other. That’s what engagement is all about.

If we don’t engage, it’s hard to see how we could possibly accomplish our mission. We can only go and make disciples of all nations if we engage the non-Christian world.

In addition to our spiritual riches that we have to offer, Hunter notes that Christianity has much to offer through its cultural achievements, its intellectual and artistic vitality, and its service to the needs of others. This is why I’ve posted about the need for the church to make its intellectual and artistic life a priority, and why I will post about the church’s life of service two posts from this one. Right now, though, let’s dig a little deeper into the two key reasons why we must engage society.

Rodney Stark, the great historian and sociologist, has spent a career researching the growth of the ancient church, and he says that conversion happens when social relationships with religious people outweigh all other social relationships. People generally won’t convert until they have a relationship with someone who is part of the religion they are converting to. If we restrict admission to our churches (whether intentionally or not) to Christians only – if we don’t want those people sitting in the pews with us – we won’t win converts. Those people need to be with Christians if they are to become Christian.1

We engage because we have something to say to society. Stephen Block acknowledges in his secular book Why Nonprofits Fail

2 that charities speak for the conscience of a society and are the driving force behind efforts to improve the quality of life. He says that, historically, charities have been associated with championing not only popular causes, but also very objectionable causes which society has not always appreciated.

I might add that most of these charities were Christian in origin. For just one example, the now secular Society for the Prevention of Cruelty to Animals (SPCA) was founded by William Wilberforce, the same Evangelical who worked so hard to abolish slavery throughout the British Empire. The humane treatment of animals was part and parcel of the same robust theology which led him to invest most of his life crusading against slavery.

Unpopular initiatives, such as Wilberforce’s campaign against slavery, can find widespread support over time, so we should not back away from taking unpopular positions. According to Block, it’s been said that the impetus for every major social reform in the United States has been sparked by voluntary action (i.e., by charities).

Speaking prophetically to society is still the role of the church today. To fulfill this role, the church must remain an alternative community which has something distinctive to offer society. 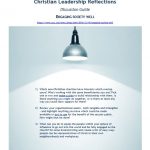 Michael Frost notes in his book Exiles: Living Missionally in a Post-Christian Culture

that Jesus lived among his fellow villagers for thirty years and when he began his ministry, no one said, “I always suspected there was something strange about that kid.” He wasn’t isolated from the people who obviously could not be as good as him. He didn’t consider them too sinful to be around. The villagers knew him well enough that when he began his ministry, they “wondered where he got all this messianic stuff.”3 It wasn’t like Jesus was a loner, isolated from the society of his village, who popped up out of nowhere with his messianic ideas. He was integrated into village life and the villagers thought they knew him and what he was about…until he began his ministry!

Jesus was righteous, but he was also ordinary. He lived in close contact with the world around him, yet was not sullied by it. Frost concludes that “We are called, like Christ, to be godly, but we are expected to live it out fully in the midst of others.”

Inspiration from the Exile

As exiles, we must maintain a critical distance from our cultural context to remain faithful to Christ while at the same time being deeply immersed in the cultural context to bring Christ into it. Our role models for living in exile are Joseph in Egypt, Daniel in Babylon, and Esther in Persia.

As an example of faithfulness in an exilic culture, Don Howell notes in Servants of the Servant: A Biblical Theology of Leadership

, that Daniel mastered the language and literature of his host culture. He used the Babylonian name which was given to him. He served with distinction for nearly seventy years in the upper echelons of several successive secular, idolatrous governments. And through it all he retained the cutting edge of his faith and impacted the culture for God’s glory. He was an exceptional administrator who was without a trace of corruption and who retained his trust in God even under threats of death.4 He did not withhold his gifts from his host society, nor did he separate himself from it. He was fully engaged as a faithful Jew.

How we should engage

So, how should we engage our world today? Michael Frost suggests that an incarnational witness will include four aspects:5

In another post, Harry White (CEO of Ray of Hope, a ministry to the homeless, addicted and young offenders of my city) explains to my neighbours how to build community with people who are not like us.

Engaging the public will take many of us outside our comfort zones, but we need to do it anyway. There is always a risk when you engage with people who are not like yourself, but we need to overcome that risk and its potential to stop us by focusing on our call to represent Christ well.

that when the early church was facing the ultimate risk of extinction due to persecution, instead of praying for protection, they prayed “Now Lord, consider their threats and enable your servants to speak your word with great boldness.”6 May we do likewise.

Key thought: We can only advance our mission if we are engaged with the world around us.