Among friends in Zurich 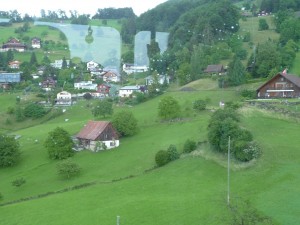 Coming down Rigi-Kulm mountain in Switzerland in the rain.

Leaving from Lens on Thursday morning, I had a very pretty drive through the flatlands of northern France as I made my way to Zurich. It turned out I was following the route of the WWI frontline for part of the journey as I crossed over the Canal du Nord and saw signs for Valenciennes and several other Canadian battle sites. As I got closer to Switzerland the terrain became hillier and hillier. No Swiss Alps today though. I arrived in my hotel room at 5:30 pm and by 6:30 I was among friends in the lobby. 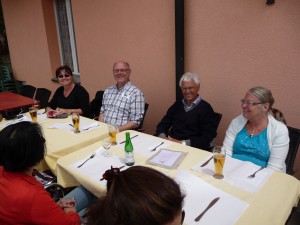 As the last stop on my world travels, it was a nice change to not be alone, but to be in the company of friends. I am taking a short break from the sabbatical while attending the annual meeting of ICFO, the International Committee on Fundraising Organizations. This is an international association of agencies that, like CCCC, have standards for charities and give a Seal to those they monitor for compliance. ICFO has members from Canada, the U.S., France, Norway, Spain, Italy, Germany, Taiwan, Sweden, The Netherlands, Austria, and Switzerland, along with supporting members from Belgium and the U.K. and observers from Mexico and Cambodia.

Last year CCCC hosted the meeting in Waterloo Region, and this year our Swiss counterpart hosted it. Martina Ziegerer, Executive Director of ZEWO, put on a scrumptious dinner at her house Thursday night. I really enjoy this opportunity to have a meal in someone’s house because it invites a more personal glimpse into life in the host country than you would ever get in a restaurant and I think the intimacy of a home also helps build relationships. I have to say that when I hosted this dinner last year it was an amazing thing to hear so many accents in my own living room!

On Friday there is always a public meeting, to which the host agency invites its members to join with the ICFO members for a day of interesting presentations. This year the day focused on major fundraising and evaluation trends in the global charitable sector. While discussing the fundraising potential of social networking and text messaging, one of the presenters said that a generation in terms of technology is seven years and that people become conversant in technology at age fifteen. This means that when a person reaches their 22nd birthday they become out-of-date and have been replaced by a younger generation which has the latest technology. The speaker recommended that we should all have a 15 year-old as a technology mentor. If you rely on young adults to advise on technology, you will be one generation behind. I am not so sure about that, but I did think, “Good for me!  My 16 year-old daughter Marilyn can be my mentor.” At the same time, Michael Hammer, president of One World Trust, leaned over and quipped, “Children always think they know more than their parents. Now they can say, ‘I told you so!'”

We had dinner Friday night at the Hotel Zurichberg, which is on a very high point overlooking the city. It is a gorgeous property with a million dollar view! The Alps lie in the distance, the city and Lake Zurich are below us, green pastoral fields are just a bit in the distance and some woods are to the left. The view from the hotel has everything. The hotel is owned by a huge company that started out as a charity, a quite unusual situation.

A hundred years ago the Zurich Women’s Association was created to help women whose husbands drank too much. It ran a restaurant where no alcohol was served, providing a family-friendly place to eat out. They also provided housing for abused women. The association was a charity, but about forty years ago it started serving alcohol for private events so they could hold wedding receptions at the hotel. They discovered how profitable serving alcohol is and surprisingly gave up their charitable status, got a license and began serving alcohol to anyone of age. Today the former association has a large number of hotels and restaurants it owns or manages (including the hotel I’m staying in) and sales of 130 or 140 million Swiss Francs. It is a very large and very successful business. In Canada, they would not have been able to keep their assets once they deregistered as a charity. It boggles the mind how there could be such a complete reversal of values.

Saturday was an all day business meeting followed by dinner at a very nice restaurant on the shore of Lake Zurich. I sat beside Gerard and Elizabeth from France and had a chance to have a number of conversations in French. They were helpful with vocabulary when I needed it, and I was pleased I could make myself understood. They spoke at a good pace that allowed me to follow them. Thanks Gerard and Elizabeth!

When all the business is over, tradition is that the host country arranges a tour day on Sunday to show everyone something of the country. Martina did a fantastic job. 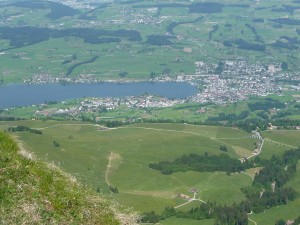 We left Zurich on a train for Lucerne, where we took a paddlewheel steamboat down Lake Lucerne to Vitznau. Passengers could see the pistons and driveshaft for the paddle wheels working furiously. The ship was built in 1901 and all the gears etc. are sparkling clean. It was wonderful to see it working so smoothly. 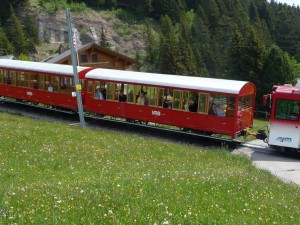 We then boarded a cogwheel train for a steep half-hour climb to the top of the mountain, Rigi-Kulm. What a view we had from there. There were lots of cows out in the fields, so the sound of cowbells rang in our ears. Two men were also playing alp horns somewhere. We still weren’t in the Alps, but close to it, and the Alps looked magnificent on the horizon. 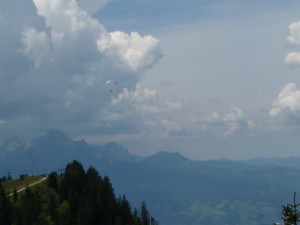 There was quite an updraft on one side of the mountain and three para-sailors were continually circling in the area. One was up there for more than an hour. 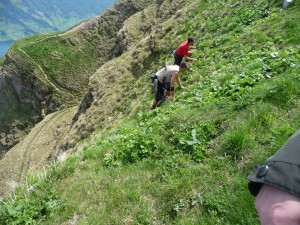 At the top, I looked over the edge and saw two guys coming up the side of the mountain (not on a trail, but climbing) and watched them do the last forty feet. Over the railing they came and then they pulled out the water bottles! It looked like the climb was no big deal. A small plane also did two passes by the mountain top, one just below our altitude and one just above.

Lunch was on a deck with an outstanding view. Next we took the steepest and longest cable car ride I’ve ever been on to the village of Weggis. 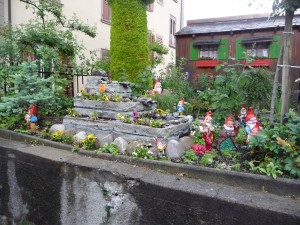 We walked through the village to the docks, where we once again boarded the same steamboat we had already been on and went back to Lucerne, and then by train back to Zurich. 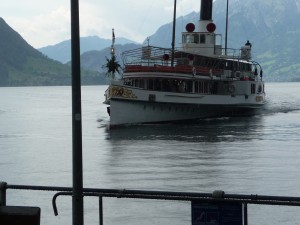 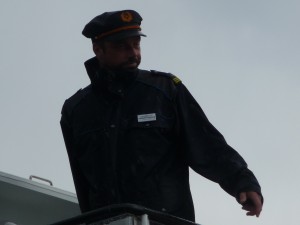 Tomorrow morning, Monday, I will leave Zurich and drive to Gare Du Nord in Paris, where I will catch the Eurostar train to London. On Tuesday I leave from Heathrow and land in Toronto, where I WILL BE GREETED BY MY FAMILY!!!! A quick one hour trip to Waterloo and I’m home for a few days before leaving for a one week retreat to assimilate everything I’ve learned. I have a wealth of information to digest from all the meetings I’ve had.

It has been a wonderful trip, and when I’m home this week I’ll post some travel tips I’ve learned.